There’s nothing quite like family time! Adam Sandler enjoyed a stroll with his rarely seen daughters while in Los Angeles on Oct.11.

Adam Sandler, 55, stepped out with his two gorgeous daughters!. The Hubie Halloween actor was spotted with his two children Sadie Madison Sandler, 15, and Sunny Madeline Sandler, 12, while out and about in Los Angeles on October 11.

Adam looked relaxed as he walked around the neighborhood with his two daughters and their adorable pup, Bagel. The Sandler brood kept it casual and opted for a mix of loungewear and pajamas for the outing. In true fashion, the actor kept it casual by rocking basketball-style white shorts with brown ankle height Ugg boots and a loose pink-striped shirt. Like father, like daughter, his youngest took a cue from her dad and chose Ugg boots to match whereas Sadie opted for white sandals. 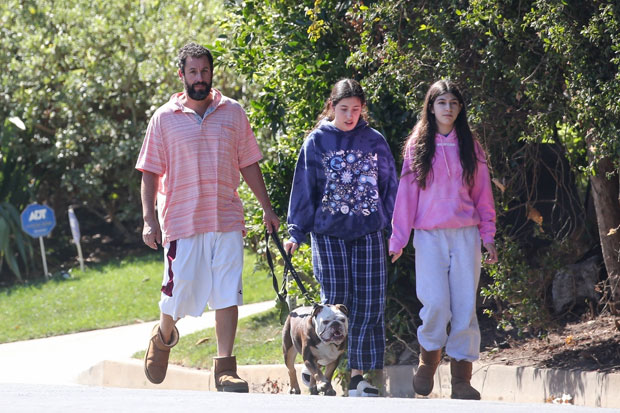 This isn’t the first time the comedian has been photographed as of late. Just on August 15, he was spotted having some much-needed fun in the sun while snorkeling in Palma De Mallorca, Spain. During the outing, the actor snorkeled in the scenic blue waters which matched his blue swim trunks. 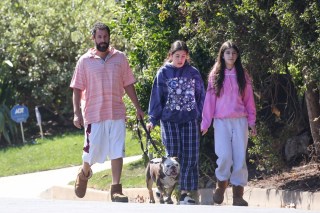 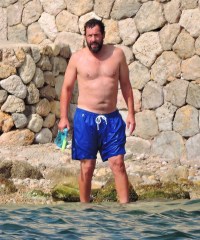 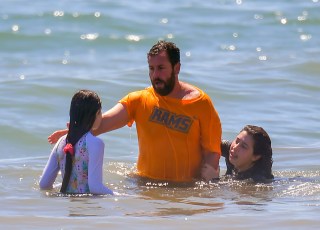 All work and no play was definitely not his motto as he was in the country to film his latest film his Netflix basketball film Hustle. Produced by Adam and LeBron James via their respective production companies, the film has a star-studded lineup that includes Queen Latifah, Robert Duvall, and Jordan Hull. Besides Hustler, the comedian has a science-fiction drama called Spaceman, which will be released in 2022.

Adam has a lot on his plate but doesn’t take the credit to himself. The star sweetly gave praise to his longtime wife Jackie for her support over the years. More specifically, while on The Ellen DeGeneres Show in December 2019, the Grown Ups actor had nothing but positive things to say about his supportive wife and their approach to providing input for upcoming films.

“Movies, you know, we discuss what I’m gonna to do. And she gives me strength and courage to jump into this stuff.” At the 2020 National Board of Review Gala, Adam also said Jackie convinced him to starin his acclaimed film Uncut Gems: “My badass wife, she gave me the balls to take the part,” he said. “I was scared and she said, ‘Go f*cking do that’ and ‘you can do that sh*t’ and we rehearsed together all the time.”