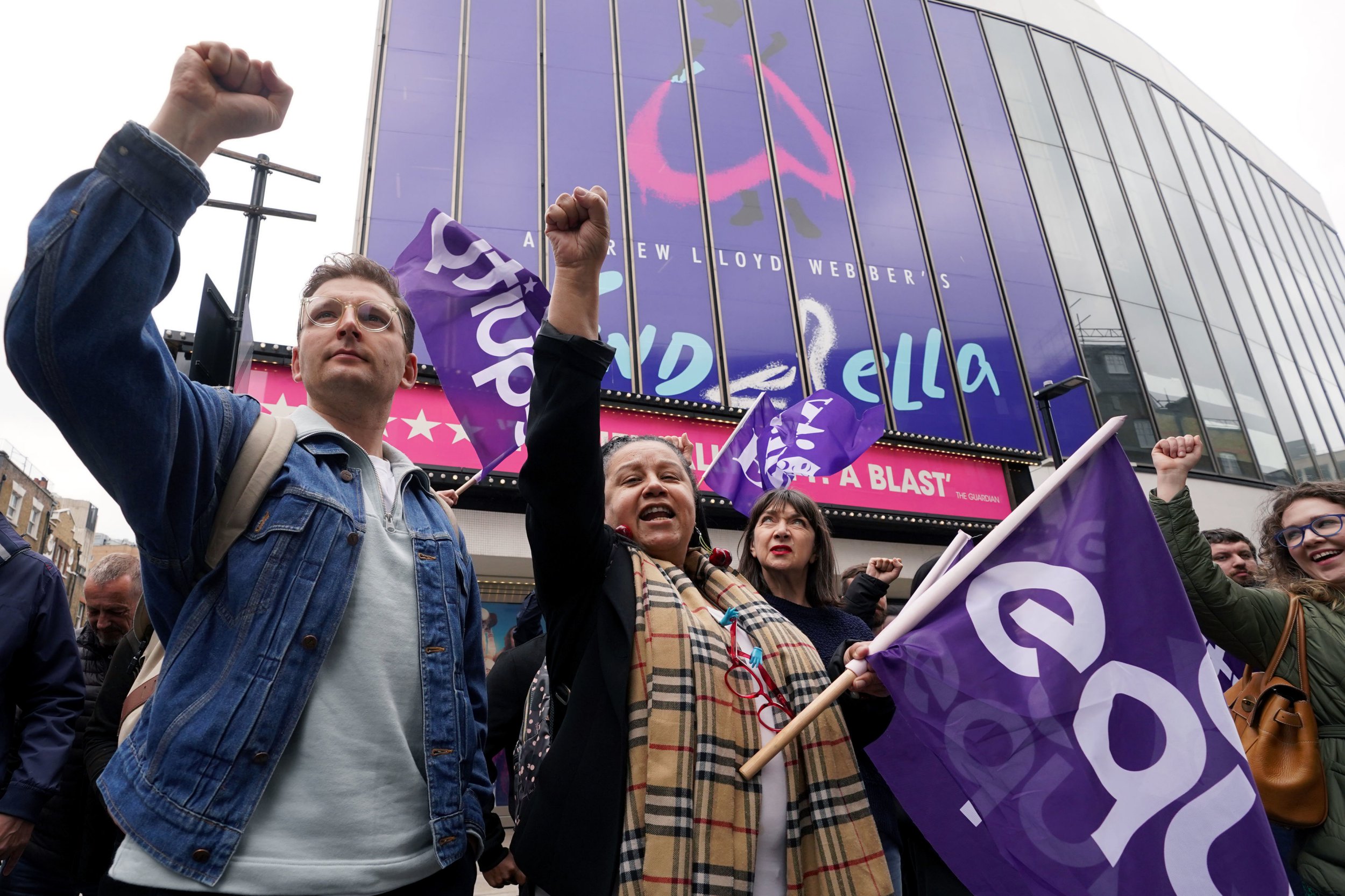 Protestors have picketed Cinderella in London’s West End following the shock news of its axe.

It was announced on Sunday that Lord Andrew Lloyd Webber’s production will end on June 12 after less than a year playing at the Gillian Lynne Theatre, with reports that some staff read the news on social media before being told themselves.

Performing arts union Equity has called for compensation for both current and future cast members and staged a protest outside the theatre calling for creative workers ‘to be treated with dignity at work’.

Its general secretary Paul W Fleming said: ‘Equity members made this show. They poured their hearts and skills into it through the worst two years in living memory. Now they’re jobless, effectively sacked by press release.

‘All unions are fighting forms of this practice right now – and Equity will get compensation for our members after the pain and distress this has caused them.’

The union is demanding current cast members receive the full value of their contracts until they are due to end on July 17 and that those who were due to join the cast at the beginning of June get ‘adequate compensation’.

It is also demanding producers give more thought to the effect of their business decisions ‘on the real lives of their work force’ and alert the union in advance of any future closures.

‘Do not think that sending an email out to an agent or cast member after hours is fulfilling your obligation. It is not a press matter, it is a matter of workers’ dignity.’

Written by The Crown star Emerald Fennell and starring Carrie Hope Fletcher, Cinderella is described as a ‘complete reinvention’ of the classic fairytale and is based on an original idea by Fennell.

It has been hit with Covid-related disruption since first being workshopped in 2019, before previewing in June 2021 with a reduced audience due to pandemic restrictions.

Hope Fletcher, who plays Cinderella, wrote on Twitter: ‘I don’t think I have the words. And if I did I would probably be advised not to say them. Sending love to all impacted by todays news and by how that news was delivered.’

In a statement, Lord Lloyd-Webber previously said he was ‘incredibly proud’ of the show, adding: ‘Not only did it get some of the best reviews of my career, but we led the charge to reopen the West End, ensuring that theatre and live entertainment remained relevant and in the news.

‘While mounting a new show in the midst of Covid has been an unbelievable challenge, we held the Government’s feet to the flames throughout their changes of heart during the pandemic.’

Lord Lloyd-Webber’s statement added: ‘Now, I am really excited to get to work putting together a new production with (production company) No Guarantees for Broadway.

‘Thank you very much to everyone involved, particularly our UK audiences who have loved and supported the show. See you next March on Broadway.’

Ricky Gervais’ most outrageous jokes at the Golden Globes

Matt Lauer had an affair with a 'well-respected' NBC star: report