Longtime Nashville resident Anthony Quinn Warner has been identified as the man responsible for the Christmas Day bombing. Authorities say he died in the explosion.

Anthony Quinn Warner has been identified by federal authorities as the men behind the Christmas Day bombing in Nashville, Tennessee. The 63-year-old tore through the city in an RV, blasting a warning to evacuate the area, before blowing up the vehicle and himself in the explosion. Don Cochran, US attorney for the Middle District of Tennessee, said authorities believe he acted alone. “We’ve come to the conclusion that an individual named Anthony Warner is the bomber. He was present when the bomb went off and then he perished,” Cochran said in a December 27 press conference. Here’s 5 things to know about Anthony.

1. He had experience working in IT. Anthony worked as a freelance computer technician for the realty company Fridrich & Clark Realty’s Green Hills, along with other businesses, his former boss Steve Fridrich told the Nashville Tennessean. The outlet also reported that Anthony resigned from his job unexpectedly this month. He has been working for the realtor for four years when he quit in a move that his former boss described as “out of character”. 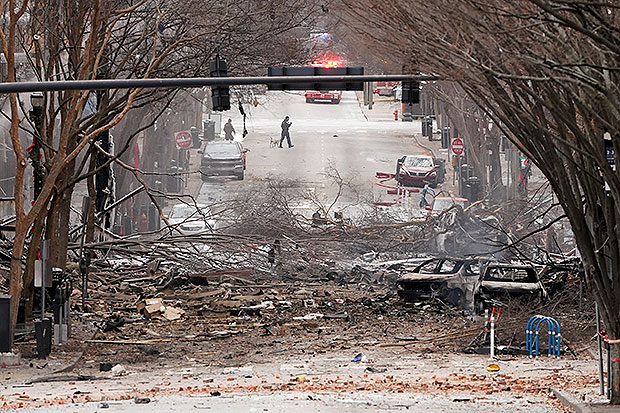 2. Anthony’s motives remain unknown. The RV exploded near an AT&T building early on Christmas morning, leading some Twitter users to theorize that his motives could be linked to paranoia and conspiracy theories related to 5G technology. Nevertheless, authorities told reporters on December 27 that his motive remained unknown.

4. His neighbors described him as “low key”. One neighbor told the Nashville Tennessean that the 63-year-old had never indicated to a closely held ideology, nor did he discuss politics or religious. “I can tell you as far as politics, he never had any yard signs or flags in his window or anything like that. If he did have any political beliefs he kept, that was something he kept to himself,” one resident told the outlet, adding that he was, “kind of low key to the point of, I don’t know, I guess some people would say he’s a little odd. You never saw anyone come and go. As far as we knew, he was kind of a computer geek that worked at home.”

5. He played Petula Clark’s pop song “Downtown” shortly before the blast. Officer James Luellen, who was among the six cops that evacuated civilians from the area, confirmed he heard the hit 1965 song before the explosion. “The music started, and I notified over the [police radio] air to notify other officers,” he said at a press conference on December 27. One lyric, about going to the city to seek refuge from sadness, played just before the blast.