Home » Celebrities » For Megan Rapinoe, Boldness in the Spotlight Is Nothing New

PARIS — The interview room was packed with reporters and television cameras. Fox Sports went live with a telecast, as if it were covering a presidential news conference. In an indirect way, it was.

Then Megan Rapinoe, the star forward for the United States women’s soccer team and a social activist, stood her ground. At a regularly scheduled news conference for the team on Thursday, she reiterated that she would refuse to visit the White House if the Americans won the Women’s World Cup, regardless of President Trump’s criticism of her via Twitter on Wednesday.

That move probably didn’t surprise anyone. It is difficult to imagine an athlete who appears more assured in her views and comfortable in the spotlight than Ms. Rapinoe. She has, after all, dyed her hair lavender for the tournament, a sign of her willingness to stand out.

Recently, she became the first openly gay athlete to appear in the Sports Illustrated swimsuit issue. She and her partner, the basketball star Sue Bird, last year became the first gay couple to be featured in ESPN’s Body Issue, in which athletes pose without their clothes.

Ms. Rapinoe has led the way in the women’s national team’s lawsuit against U.S. Soccer, accusing the federation of gender discrimination. She has referred to herself as “a walking protest” of the Trump administration. On the field and off, she has relished the big stage and has sought to use the public platform provided by the success of the national team to advance both women’s soccer and broader social issues.

“If you want to be in this profession, it’s best to embrace those big moments,” Ms. Rapinoe said Thursday. “That’s where all the goods are.”

In a statement before the news conference — held to discuss Friday’s much-anticipated quarterfinal match in Paris between the World Cup’s two favorites, the United States and France — Ms. Rapinoe apologized for having used an obscenity when dismissing the idea of a White House visit. That comment came in a videotaped interview with the soccer magazine 8 by 8 earlier this year.

She even doubled down on Thursday, suggesting that she would encourage her teammates not to visit the White House, either. She said she did not want a decades-ong fight for equality and inclusivity by the American team to be “co-opted by an administration that doesn’t feel the same way and doesn’t fight for the same things that we fight for.”

Ms. Rapinoe did not directly address Mr. Trump’s criticism of her, in which he wrote on Twitter that she “should never disrespect our country, the White House or our flag.” 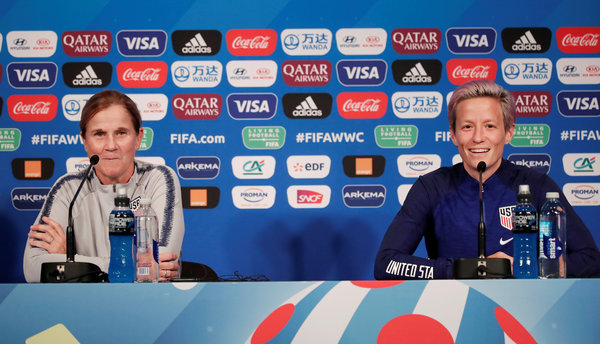 He also wrote: “I am a big fan of the American Team, and Women’s Soccer, but Megan should WIN first before she TALKS! Finish the job!”

Ms. Rapinoe, who will be 34 next week, was asked Thursday whether her jousting with Mr. Trump might distract her team at such an important moment in the World Cup, or destabilize the American locker room. She said emphatically that it would not. “I think, if anything, it just fires everybody up a little more,” she said.

Ms. Rapinoe has been heavily influenced as an athlete and as an activist by an older brother, Brian, who is 38. When Ms. Rapinoe and her twin, Rachael, were growing up in Redding, Calif., it was their brother who led them into soccer and vigorously challenged them in two-on-one pickup basketball games, instilling in the sisters an unrelenting approach.

In his adult life, Brian Rapinoe has struggled with drug addiction, and both he and Megan have spoken openly of his issues. On Thursday, Ms. Rapinoe acknowledged that her brother’s struggles had influenced her social conscience, her views on drug reform and her desire to help protect society’s most vulnerable people.

Brian Rapinoe has been in and out of jail for a series of drug-related crimes. According to the California Department of Corrections, he is in custody in a community re-entry program in San Diego and will be eligible for parole in August.

Ms. Rapinoe said she had come to realize that those incarcerated for drug addictions were “just normal people; they’re your brothers and your friends and your family.” In influencing her sense of social justice, she said, her brother’s story “has a lot of ramifications outside of drug abuse.”

Now Ms. Rapinoe stands for the anthem but does not sing or place her hand over her heart. On Thursday, she declined to detail exactly what her protest entails. But earlier this month, Ms. Rapinoe told Lizzy Goodman for a story in The New York Times Magazine that her involvement in social issues reflected the work of movements like Time’s Up, #MeToo, Black Lives Matter and L.G.B.T.Q. advocacy.

“To me, it’s literally all the same, insofar as I want people to respect who I am, what I am — being gay, being a woman, being a professional athlete, whatever,” Ms. Rapinoe said in the article. “That is the exact same thing as what Colin did.”

She added: “What kind of person do you want to be for yourself, but also in the larger context of the country and in the world?”

Ms. Rapinoe’s breakout occurred during the 2011 World Cup, when she scored a goal against Colombia, grabbed an on-field microphone and began singing Bruce Springsteen’s “Born in the U.S.A.”

In that same tournament, she made one of the greatest plays in the history of American soccer, lofting a crossing pass to Abby Wambach for a headed goal in the 122nd minute of an eventual victory in a penalty shootout against Brazil.

In the next match, Ms. Rapinoe came off the bench to deliver two assists in a semifinal victory over France. Afterward, she said blithely, “I believe I’m a fantastic player, and I try to go out there and do those things.”

Jill Ellis, the U.S. coach, has long agreed with that assessment. She said Thursday she was not worried about any increased pressure on the American women, noting that they thrived under pressure.

“I think we all support Megan,” Ms. Ellis added. “She knows that.”

Ms. Rapinoe also appears to have the support of FIFA, soccer’s world governing body. FIFA has historically been lacking in support for women’s soccer, but at Friday’s match and at other quarterfinal games it plans to campaign publicly for inclusivity and against discrimination of any type.

Ms. Rapinoe was not always so comfortable in the spotlight.

In middle school, Ms. Rapinoe told Yahoo Sports in May, she felt “lost” and “really alone.” But she began to flourish once she started understanding her sexuality, her twin sister told Yahoo.

“Maybe part of the reason she was quiet growing up was because she felt a little different,” Rachael Rapinoe said. “She didn’t quite feel comfortable in her skin. But once she realized who she was and why she felt the way she felt,” that’s when “she found strength in her voice.”

On a national team that, for two decades, has been publicly standing against what it considers inequalities in pay, travel and playing conditions, Ms. Rapinoe’s assertiveness has helped give broad, fearless license to her teammates to also demand equitable treatment and social justice.

Julie Foudy, a former captain of the national team and a two-time World Cup winner, said of Ms. Rapinoe and her teammates: “In a way that I have never seen before, this team seems to unapologetically own their voice. It’s O.K. to be confident. I no longer need to apologize for saying I want to win. I don’t need to say I’m sorry because I’m competitive.”

Ms. Foudy added: “I haven’t heard that before in such a way, across the board. Maybe that’s because you have examples like Megan, who does it so authentically.”