Gabrielle Union chose an eye-catching look to wear while promoting her new book.

The L.A.’s Finest actor wore an outfit straight from the runway for Stella McCartney’s Resort 2022 collection to her book You Got Anything Stronger? Wednesday. Union stepped out in the brand’s Marlee faux-shearling coat in royal blue, a glittery lingerie-style mini-skirt with lace embellishing, and white pointed-toe heels. She also carried a teal and black stripped top-handle bag. 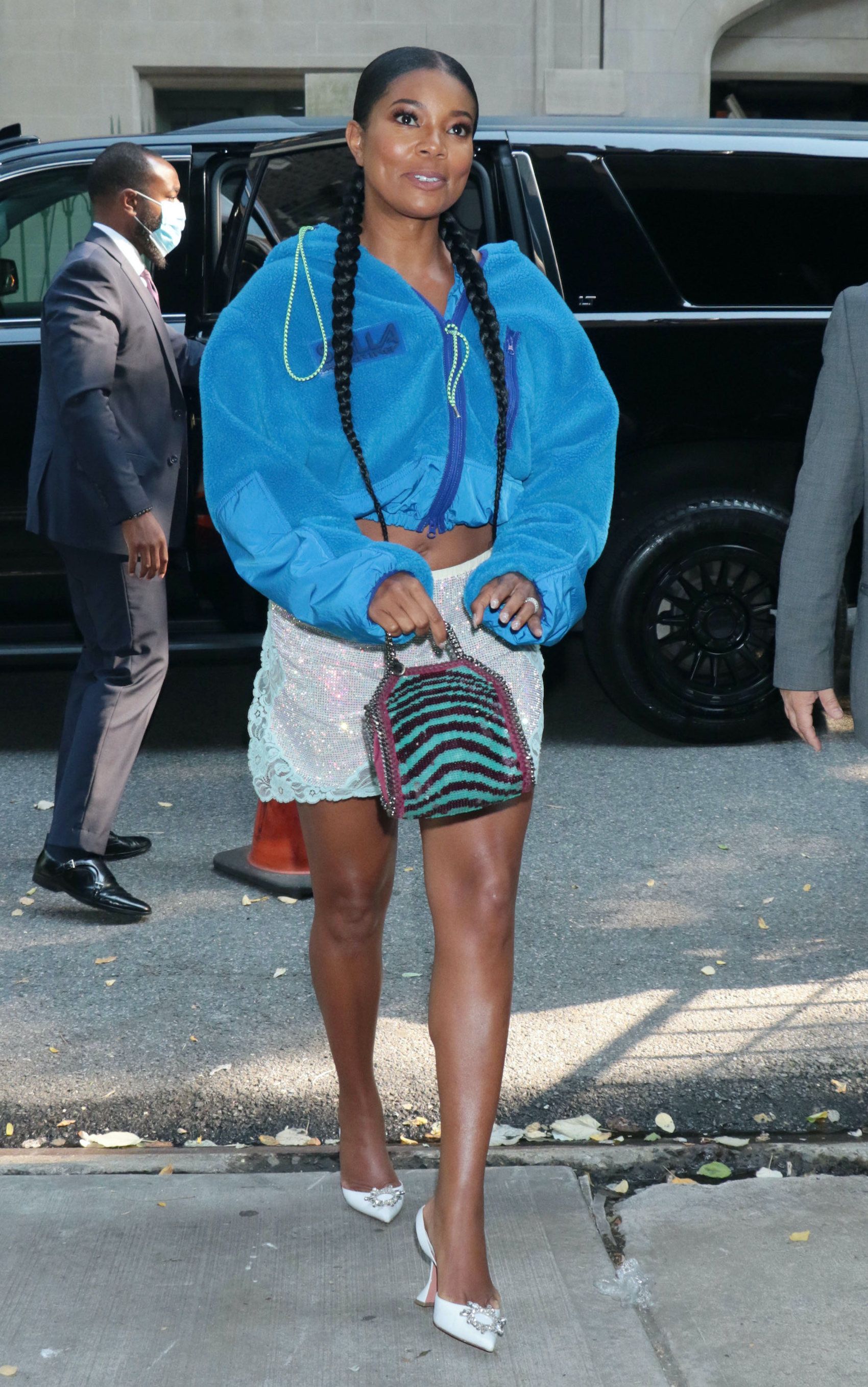 The star shared some snaps of the look on her Instagram, along with another press day outfit. She wore a long-sleeve, turtleneck dress by Versace in the luxury house’s La Greca pattern, with their Medusa Aevitas platform pumps in black.

“Where Is She Going?!!?!!! Biiiiiiish, Everywhere,” she captioned the post.

The “Bring It On” actor published a candid excerpt from her book in Time, where she wrote publicly for the first time about her fertility journey and her decision to have her daughter, Kaavia James Union Wade, through a surrogate.

She also opened up about learning that her husband, basketball star Dwyane Wade, had fathered a child, his son Xavier Zechariah Wade, while he and Union were broken up in 2013.

“It should go without saying that we were not in a good place at the time that child was conceived,” Union wrote. “But we were doing much better when he finally told me about the pregnancy. To say I was devastated is to pick a word on a low shelf for convenience. There are people — strangers I will never meet — who have been upset that I have not previously talked about that trauma. I have not had words, and even after untold amounts of therapy I am not sure I have them now.”

She added, “The experience of Dwyane having a baby so easily — while I was unable to — left my soul not just broken into pieces, but shattered into fine dust scattering in the wind.”

Wade had previously recalled the moment he told Union about the pregnancy in the ESPN documentary D. Wade: Life Unexpected, released last year.

“Hardest thing I’ve ever had to do is man up and tell Gabrielle Union that I’ve had a child with somebody else. I couldn’t sleep. I wasn’t eating,” he said in the film. “Me and Gab just went through something that you never want to go through and we still came out of it.”

The couple were married in 2014 at the Chateau Artisan castle in Miami. Union shared a slideshow of family memories to celebrate their seventh wedding anniversary last month.

“Ain’t No Stoppin Us Now. 7 years and a lifetime to go. My best friend, the coolest homie, mentor and inspiration, my love, my husband. I 🖤 you @dwyanewade Happy Anniversary baby,” she wrote in the caption.

Alix Lapri net worth: How much is the Power Book 2 Effie star worth?