Home » Celebrities » Gun that killed Halyna Hutchins used for leisure shooting by crew the morning of the accident: report

Crew members on the movie “Rust” reportedly used the firearm involved in the death of Halyna Hutchins the morning of the fatal accident.

According to a search warrant executed by the Santa Fe County Sheriff’s office, obtained by Fox News, Armorer Hanna Gutierrez Reed handled the prop gun, leaving it among others on a cart outside the set location they were filming. Assistant director Dave Halls then retrieved the gun and handed it to actor Alec Baldwin announcing that it was a “cold gun,” a term used to indicate that a prop gun is safe to handle and not loaded with live ammunition.

However, somewhere along the line, there was a miscommunication and a live round was put in the weapon that discharged when Baldwin pulled the trigger, killing Hutchins and wounding director Joel Souza. TMZ previously speculated, after sources close to the set reported that the guns were sometimes used for off-time target practice, that the hobby contributed to the live-round mixup.

The Bonanza Creek Film Ranch in Santa Fe, N.M., is shown Friday, Oct. 22, 2021. Actor Alec Baldwin fired a prop gun on the set of a Western being filmed at the ranch on Thursday, Oct. 21, killing the cinematographer, officials said. The director of the movie was wounded, and authorities were investigating.
(AP Photo/Andres Leighton)

Now, according to a report from TheWrap, unnamed crew members have stated that the firearm handled by Gutierrez Reed, Halls and Baldwin was used earlier that same day to go “plinking,” a hobby in which people shoot at beer cans with live ammunition for fun.

Representatives for the production of “Rust” did not immediately respond to Fox News’ request for comment. 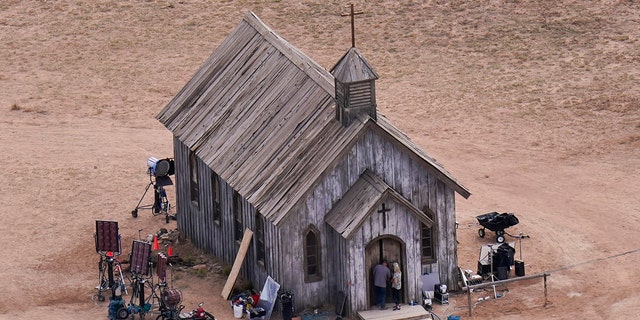 The movie ‘Rust’ was being fimed at the Bonanza Creek Ranch in Santa Fe, N.M.
(AP Photo/Jae C. Hong)

However, in a previous statement, issued to multiple outlets, Rust Movie Productions said: “The safety of our cast and crew is the top priority of Rust Productions and everyone associated with the company. Though we were not made aware of any official complaints concerning weapon or prop safety on set, we will be conducting an internal review of our procedures while production is shut down. We will continue to cooperate with the Santa Fe authorities in their investigation and offer mental health services to the cast and crew during this tragic time.”

Halyna Hutchins was a rising star in the cinematography world when she was hit with a projectile on set that ultimately killed her.
(Photo by Fred Hayes/Getty Images for SAGindie)

Regardless of whether or not the firearms were improperly in proximity or loaded with live rounds, experts say there are systems in place to ensure prop guns are inspected before they enter an active set. As a result, Gutierrez Reed, Halls and Baldwin could be subject to a myriad of criminal or legal ramifications.

Souza said in the warrant that the cast and crew prepared the scene before lunch and then had their meal away from the shooting location around 12:30 p.m. He was not sure if the gun was checked again when everyone returned from lunch. However, he stated that firearms are supposed to be checked by the armorer followed by the assistant director before handing them to the actor. He said he was not sure if people were checked for live ammunition on their person, but stated that live ammunition should not have been anywhere near the scene in question.

'Mean Girls' Stars Reunite on 'Mean Girls Day,' Let's Get Out The Vote

FITE Review: The Streaming Site Where Every Night is Fight Night