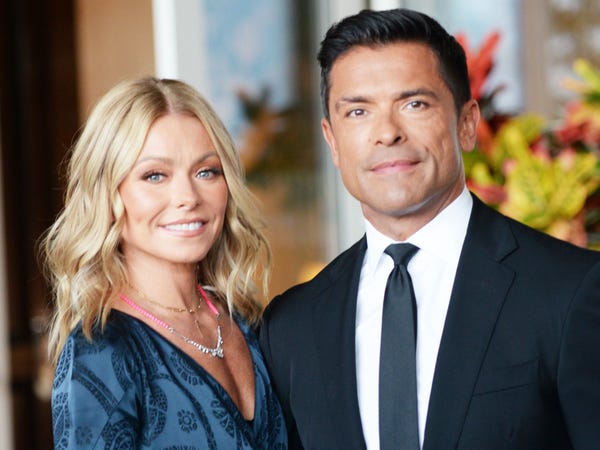 Kelly Ripa trolled Mark Consuelos about the "bulging effect" of his "tight" pants.

On Friday, the 50-year-old "Live With Kelly and Ryan" cohost shared a series of her favorite Halloween memories on Instagram. The final picture showed Consuelos, 49, and his friend Bruce Bozzi dressed up as the main characters from the NBC show "CHiPs."

Fans left comments about how fitted Consuelos' pants were, joking that it looked like he "stuffed his pants."

"OMG, your husband's basket," another added.

Witnessing the conversation happening about his private parts, Consuelos directly addressed the remarks.

Ripa, who frequently partakes in online banter with family and fans, responded, "ummmmm baby are you seeing shadows?"

He wrote back, "Pretty sure."

Ripa met the "Riverdale" actor when he auditioned for the soap opera "All My Children" in 1995.

"At that point, I was not a hopeless romantic. I never thought about getting married. It never occurred to me that I would grow old with someone," she said on an episode of "Radio Andy."

The former soap opera star added, "When I saw him — the photograph of him — I saw my entire future with him flash — I saw it."

The couple eloped in Las Vegas one year after they met and have been together ever since. They now share three children together.

And though they've been married for 24 years, Ripa still seems head over heels for the actor.

She often shares shirtless photos of her husband on Instagram, complimenting his appearance and gushing about their relationship.

And while Ripa and Consuelos seem to enjoy each other's presence on social media, their daughter Lola Consuelos doesn't feel the same.

When asked about her mother's tendency to post "thirst traps" of her father in People magazine's family issue, the 19-year-old said she tries not to think about the photos of her father.

She added, "I block that out of my mind. I forgot that you even did that."