“Her arrest is the latest in a series of troubling interactions between our reporters and some local law enforcement officers,” the NPR LA radio station said in a statement 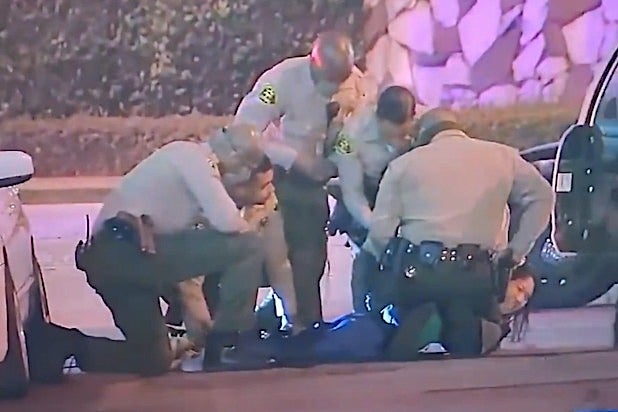 The incident occurred outside the St. Francis Medical Center in Lynwood, California, where two deputies had been transported for gunshot wounds to the head while sitting in their patrol car. The suspect is still at large.

Huang had just covered a Sheriff’s Department press briefing when a small group of protesters gathered at the ambulance entrance of the hospital.

“To the protesters blocking the entrance & exit of the HOSPITAL EMERGENCY ROOM yelling ‘We hope they die’ referring to 2 LA Sheriff’s ambushed today in #Compton: DO NOT BLOCK EMERGENCY ENTRIES & EXITS TO THE HOSPITAL. People’s lives are at stake when ambulances can’t get through,” LA Country Sheriffs tweeted.

During the arrest of a male protester who “refused to comply & cooperate arrest…a struggle ensued at which time a female adult ran towards the deputies, ignored repeated commands to stay back as they struggled with the male and interfered with the arrest,” the Sheriff’s Department said.

Video of the skirmish shows five deputies pinning Huang to the ground, handcuffing her and moving her to the patrol car.

Deputy Juanita Navarro of the Sheriff’s Information Bureau confirmed that Huang was taken into custody on suspicion of obstruction of justice by “interfering with a lawful arrest.” Huang countered, saying she was just reporting on the arrest of a protester. Although Navarro said Huang didn’t have proper press credentials at the time of her arrest, they can clearly be seen hanging from her neck in the video.

“These are challenging and stressful times for everyone, but Josie Huang was arrested while doing her job. The charges should be dropped,” KPCC said in a statement. “Her arrest is the latest in a series of troubling interactions between our reporters and some local law enforcement officers. Journalists provide an essential service, providing fair, accurate and timely journalism and without them, our democracy is at risk.”

Huang — who sustained scrapes, bruises and a blackened eye during the scuffle — was released without bail from the women’s jail at the Century Regional Detention Center at about 4 a.m.

Here’s What Jazmine Sullivan And H.E.R.’s Girl Like Me Really Means

Workouts to try on YouTube including dance, barre, kickboxing and more