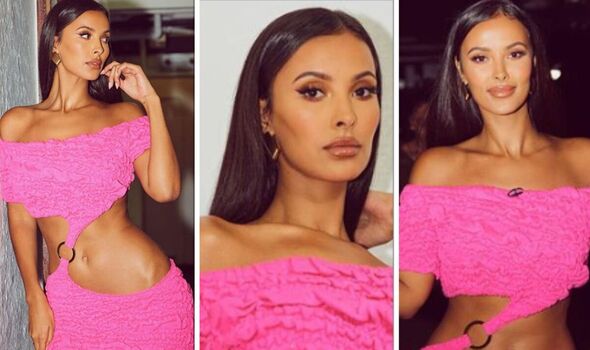 Following her debut as the Love Island: Aftersun host, Maya, 28, wowed her followers on Instagram.

Following her debut as the Love Island: Aftersun host, Maya, 28, wowed her followers on Instagram.

Showing off her enviable curves in a figure-hugging bright pink dress, the television presenter gushed over her new favourite thing to do.

She wrote in the caption: “Live TV is my absolute favourite.

“First ever Aftersun show was so much fun (I was happier than I look in these posey pics lol ) – will be back every Sunday on ITV2.” with some red hearts.

Maya is also fronting the new season of Love Island UK, breaking records as she became the first non-white host.

She discussed the first week of the series with show regulars Sam Thompson and Indiyah Polack, along with guests Tasha Ghouri, Jordan North and Andrew Le page.

The presenter showed off her curves with some bold cut-outs

Maya appeared in a bold hot pink dress that clung to her curves and showed off her toned abs.

She paired the bold outfit with some simple earrings

Some chunky gold earrings hung just above her shoulders, matching the golden ring holding together her dress.

Maya was praised for her presenting skills

Having taken over from television heavyweight Laura Whitmore, Maya had some big shoes to fill but has received rave reviews from fans.

On Instagram, the Love Island host was accused of hogging the spotlight

One person wrote in the comments: “Imagine hosting a show full of amazing women where the spotlight is supposed to be on the couples but the host steals the whole season.”

Maya promised in her caption that, despite her model-like looks and similarly stone-faced expression, she was far happier in the snaps than she appeared.

LeBron James Bonds With Daughter, 5, By Coloring In The Backyard Together — Sweet Video