After joking that she and the ‘Bad Things’ rapper may be the same person, the singer daughter of Billy Ray Cyrus quips that Megan Fox is also her girlfriend.

AceShowbiz –Miley Cyrus and Machine Gun Kelly bonded over the “I am weed” meme. After “The Last Song” actress poked fun at the “Bad Things” rapper’s viral interview in which he declared that he’s a weed, the two musicians soaked in a friendly Twitter exchange.

On Sunday, October 17, the “Wrecking Ball” hitmaker shared on Twitter some pictures of her wearing a slime green dress and a pair of silver heels. “I AM WEED,” she simply wrote in the caption, referring to MGK’s interview with GQ.

The snaps didn’t go unnoticed by MGK. In response to the post, the “Midnight in the Switchgrass” actor replied, “See, I’m not the only one,” adding a dash and sign of the horns emojis.

Miley then didn’t waste time to reply to MGK’s tweet. “We may actually be the same person. Have we ever been seen at the same place @ the same time? & yes that means Megan Fox is my gf too,” she quipped. 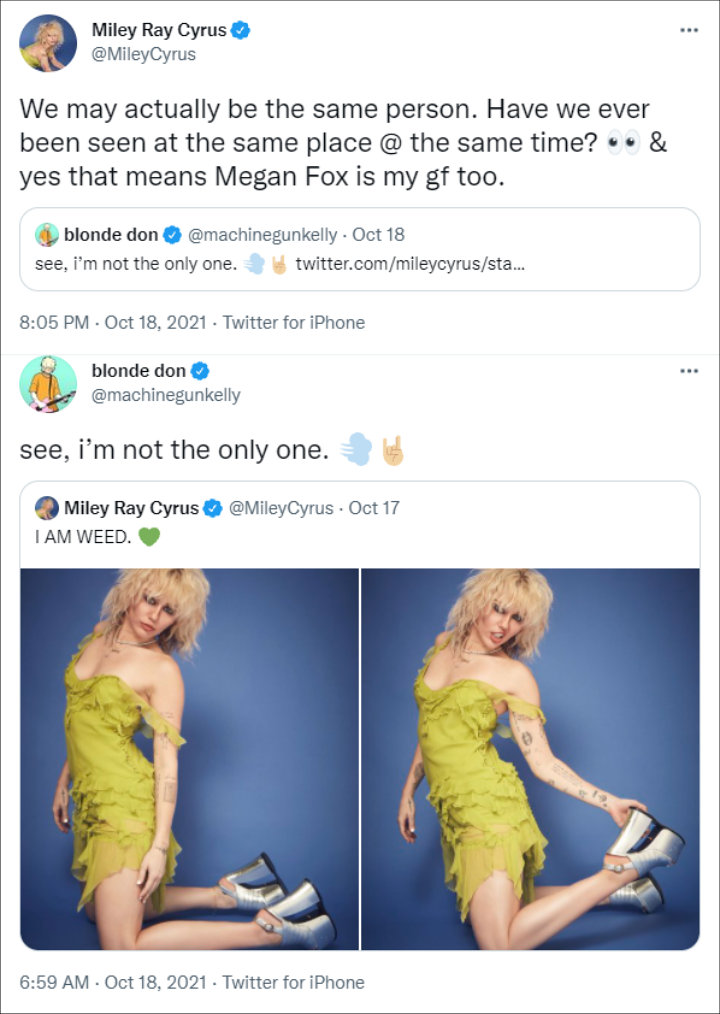 The interaction between Miley and MGK came around a week after he and Megan took GQ’s “The Couples Quiz” where they fired questions about their relationship to one another. When recalling their first meeting at a party, the “Transformers” star claimed that she told him he smelled like weed.

“I don’t remember [his] face,” Megan recounted the initial encounter. “I just remember this tall, blond, ghostly creature and I looked up and I was like, ‘You smell like weed.’ He looked down at me and he was like, ‘I am weed.’ Then, I swear to God, he disappeared like a ninja in a smoke bomb.’ “

Megan and MGK confirmed their relationship in July 2020. Before daing the “Bloody Valentine” rocker, the “Jennifer’s Body” actress was married to Brian Austin Green, with whom she shares three sons, 9-year-old Noah, 7-year-old Bodhi and 5-year-old Journey. They finalized their divorce on October 15.