Home » Celebrities » ‘No Lips. No Hands. No Lobsters.’

PARIS — It’s cooled off in France in all sorts of ways. The heat wave that smothered the country finally broke on Monday. The “Yellow Vest” protests that raised the political temperature have mostly fizzled. Les Bleues are out of the World Cup.

And in Paris, at the Couture, Daniel Roseberry, a 33-year-old unknown American from Texas newly installed at the helm of Schiaparelli, made his debut in the opening show of the season with nary a shriek of protest, a hair out of place, or a lobster in sight.

Oh — and also even though the legacy of Elsa Schiaparelli, a designer best remembered for her mind-meld with Surrealists like Salvador Dalí and Jean Cocteau and her affinity for shocking pink, has had a tendency to overwhelm previous designers, who have oft gotten lost in the imagery and forgotten to focus on the intent. Marco Zanini, the first creative director of the revived house under its new owner, Diego Della Valle, lasted just over a year, and his successor, Bertrand Guyon, about four.

Pressure? What pressure? Instead we got a bit of froth and circumstance, a splash or two of cold water.

“For me, what was interesting about Schiaparelli is her work was done at a time when everything felt like it was kind of falling apart — which is like our time,” Mr. Roseberry, who spent the last 10 years at Thom Browne, a ready-to-wear brand that dabbles in its own kind of surrealist humor and high-concept handwork, said backstage before the show. He was wearing a short-sleeve black T-shirt over a long-sleeve white one and jeans, and his matching salt-and-pepper beard was perfectly manicured in an imperfect way.

“She responded with some absurdity, some humor,” he continued. “I wanted to respond by embracing the joy of fashion while keeping it real, because fashion is essentially a service profession. This was my proposal for the brand: ‘No nostalgia. No lips. No hands.’”

And indeed, there were none.

What there was: a show in three parts (day, night, dream), swirling around Mr. Roseberry, who solved the “unknown” issue by plunking himself down, literally, in the middle of his runway behind a drafting table, the better to illustrate the origin story of the collection.

There were sleeves billowing out in silk from corset-waisted pencil skirts and slipping off the shoulder; sleeves fluted and flowing like capes to the floor paired with a precisely tailored navy car coat trimmed in alligator. 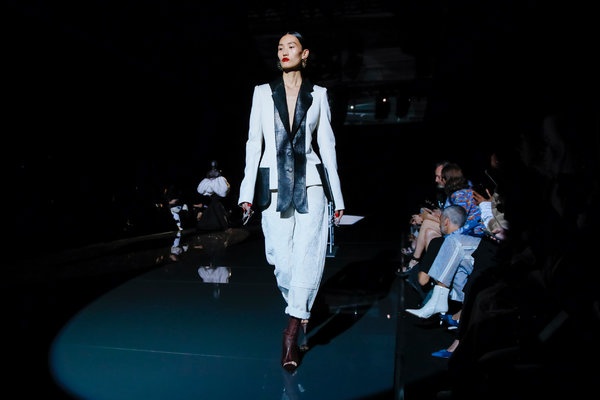 There were very good narrow black and white tuxes, the latter a jacket bibbed in black lizard and paired with embroidered silk and cotton jeans. There were cumulus clouds of pink and white faille, that floated like molded nimbuses around the body for the Instagram set.

There was a black Velcro strapless dress with beaded flowers that could be stuck on and ripped off at will (for many of the petites mains, it was the first time they had worked with synthetics, Mr. Roseberry said). And there were some very weird bra treatments that suggested Mr. Roseberry could use some more time with the female body, some Spanx-like lace underpinnings better left forgotten, and some inexplicable hoods draped over mantilla-like headgear to flop down and hide the eyes, a bizarre choice at a time when women around the world are actively ripping off blindfolds.

But there was also enough gumption there to make you want to see what will happen next, when he has had a little more time, and Parisian pickling.

Vanessa Friedman is The Times’s fashion director and chief fashion critic. She was previously the fashion editor of the Financial Times. @VVFriedman

Katharine McPhee, 35, couples up with David Foster, 70, at the Breakthrough Awards