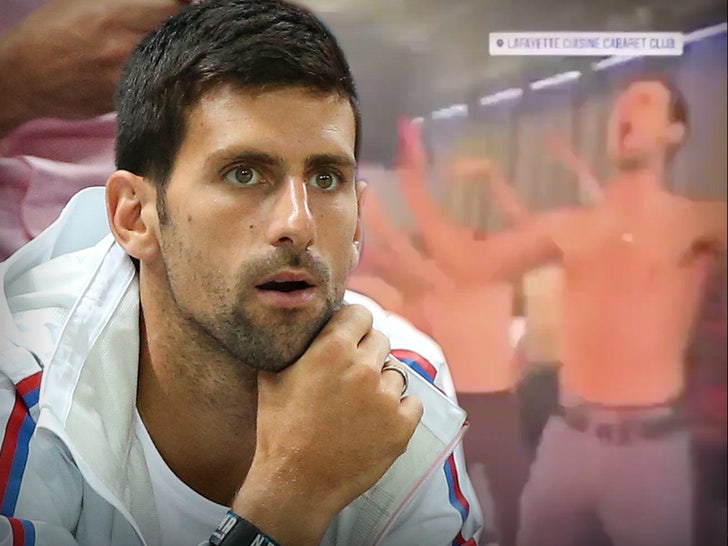 6:00 AM PT — 6/23 Djokovic now says he’s COVID-19 positive as well … and he’s issuing a mea culpa for all of his actions this past month that helped lead to an outbreak of coronavirus in the tennis community.

“We organized the tournament at the moment when the virus has weakened, believing that the conditions for hosting the Tour had been met,” Djokovic said, adding his wife also tested positive for the virus.

“Unfortunately, this virus is still present, and it is a new reality that we are still learning to cope and live with.”

Djokovic continued, “I am extremely sorry for each individual case of infection. I hope that it will not complicate anyone’s health situation and that everyone will be fine.”

The world’s No. 1-ranked tennis player — who says he is NOT displaying any symptoms — added he’ll now begin a 14-day quarantine.

Novak Djokovic is under fire for partying topless just days before his tennis tourney had a small coronavirus outbreak … with one of Joker’s peers calling the whole thing a “poor example.”

Here’s the deal … the world’s #1 ranked tennis player hosted a tournament in Croatia over the weekend but it was canceled before the final match because two of the tournament’s stars contracted COVID-19.

As it turns out, one of the two guys who tested positive — Grigor Dimitrov — had been partying with Djokovic and several other famous tennis players at a Croatian hot spot just days before.

Check out video of the dudes posted to social media last week … the men were dancing shirtless and raging their faces off — with no masks or social distancing in sight.

But, when Dimitrov and another competitor, Borna Coric, tested positive … the criticism for their big night out started rolling in.

Tennis stars all over bashed Djokovic for even trying to hold the tournament during a pandemic … with Dan Evans going off over the clubbing in particular.

“Put it this way, I don’t think you should be having a players’ party and then dancing all over each other,” Evans said. “He should feel some responsibility in his event and how it’s transpired.”

Nick Kyrgios also chimed in on the event on Twitter on Monday, calling it a “boneheaded decision” to go forward with the tournament in the first place.

For his part, Djokovic has yet to release a statement on the backlash … and is reportedly awaiting results of his own coronavirus test.

Djokovic made headlines at the beginning of the pandemic when he said he’s against mandatory COVID-19 vaccinations.