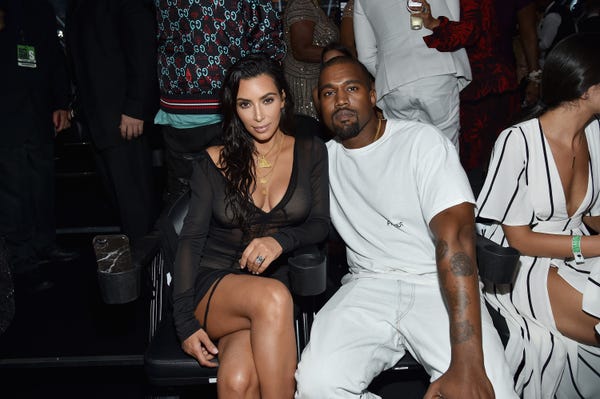 Kim Kardashian showed off her "I voted" sticker on social media Tuesday after casting her vote in the US presidential election.

Joining a host of other celebrities who have also shared images of their poll day visits, the "Keeping Up With The Kardashians" star captioned the picture on Twitter: "I VOTED!!!! Did u???"

But fans quickly descended on her comments to ask who exactly she voted for after her husband, Kanye West, in a series of Tweets, shared footage of his first time voting — and, of course, he voted for himself.

While one fan asked outright: "tell us who you voted for," another simply shared an old photo of West with Republican presidential nominee Donald Trump, who's running for reelection.

And while some fans believed that Kardashian voted for her husband, others pointed to Kardashian apparently liking tweets about Democratic presidential nominee Joe Biden and his running mate, Kamala Harris, as a clue to who she voted for in the ballot box.

Still, fans won't be confused as to who West voted for in the US presidential election.

The 43-year-old rapper wrote in his name alongside his running mate, Michelle Tidball, a 57-year-old spiritual coach, on a Wyoming state ballot and posted evidence to his Twitter account.

"KEEP BELIEVING KANYE 2020," he wrote while sharing images of his official ballot. "Thank you Jesus Christ."

West continued by writing, "The first vote of my life. We are here to serve. We pray for every servant leader in the world."

The "Last Registration" rapper first announced his presidential bid in July and had initially received support from his wife, Kim Kardashian, as well as from Tesla CEO Elon Musk.

However, he has faced an up-hill battle ever since after failing to get onto the ballots in several states since he announced so late, and has struggled to gain any other celebrity endorsements.

Despite his many setbacks, West has continued to campaign, posting various videos and messages to social media outlining his vision for America's future.

Last week in a final push to attract voters, the rapper took out a two-page advert in the New York Times in which he set out his plans for America.

In his imagined future, the rapper added, "we will H.E.A.L." and "hold everyone accountable to love."