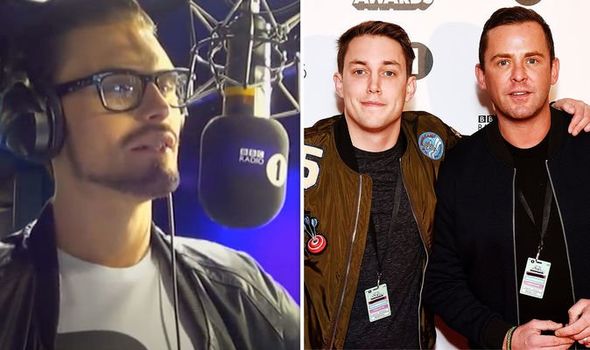 Rylan Clark-Neal, 32, fell victim to the humorous ‘Superfan Steve’ prank on BBC Radio One back in 2019. The segment features Chris Stark, 34, acting awkwardly as he pretends to be a celebrity’s biggest fan on the phone and answers all questions about their life and career correctly.

Midway through the prank, Rylan queried how ‘Steve’ knew so much about his life, including the answer to a question about his unusual bathroom habit.

‘Steve’ jumped at the chance to answer and revealed Rylan takes his clothes off while he’s on the toilet.

Puzzled how he knew such a thing, he asked Scott: “How big of a fan is Steve? He’s not on my lawn is he?!”

The presenter continued to play against ‘Steve’ for a further five minutes before all was revealed.

After discovering it was Chris and not a superfan, he shouted: “Oh Chris, you’re such an idiot!”

Rylan then realised he had actually seen a video of Cheryl being pranked by the pair, but didn’t clock on.

Reflecting on the popular prank, Chris told Express.co.uk: “The one with Cheryl was so funny and they’re all so good about it afterwards.

“The worst thing about that, which no one sees, is you speak to these people afterwards and apologise.

“I’ve never known Cheryl that much and she was so cool about it.

“Rylan was annoyed that he didn’t clock it.”

The game involved two people filling their mouths with water and facing each other to see who could last the longest without someone bursting into laughter.

The radio presenter said most of the celebrities they pranked were fine with it as it’s “a bit of fun”.

But while many loved the game, Chris said Lauren Pope and Jessie J were not fans.

The DJ went on to say the team would have to rethink about how they do ‘Superfan Steve’ due to celebrities now knowing it’s a prank.

“We’ve got to take our time, then go big! Like a Hollywood A-lister,” he added.

Elsewhere, Rylan announced he will be returning to his BBC Radio 2 duties soon after an eight-week absence.

Fans grew concerned about his whereabouts, before he broke his silence and confirmed he had split from husband Dan Neal.

He wrote on Instagram last week: “I just wanted to write a message to thank you all for the love and kindness you have shown us.

“We are currently prioritising our mental health and looking after the ones around us we love most.

“I am working towards getting back to the jobs I love in due course. Thank you for being patient with me.”

Chris is supporting Babybel’s #ForAllFans campaign, to give people the chance to give back to their local grassroots team.

Head over to Babybel.co.uk/forallfans for more information.