Savannah Chrisley is opening up about her battle with endometriosis on the HollywoodLife podcast.

Savannah Chrisley has joined a handful of celebrity women in speaking out about her ongoing battle with endometriosis, a painful disorder in which tissue similar to the tissue that normally lines the inside of your uterus — the endometrium — grows outside your uterus. On the HollywoodLife podcast, Savannah revealed she had been silently and privately struggling with this disease for years, but decided to open up about her most recent surgery in the new season of Chrisley Knows Best, premiering tonight, Nov. 11 on USA. LISTEN TO THE FULL PODCAST INTERVIEW HERE!

“There’s a lot of women who don’t feel comfortable in talking about it and feel ashamed because their bodies just aren’t quite cooperating with them and aren’t working like how we feel they’re supposed to. So for me, talking about it was extremely important because I wanted people to know you’re not alone. This is a real thing,” the 23-year-old explained. She revealed that in season two of the show, she received several hateful comments about weight gain, that was actually a result of her endometriosis medication she began taking at the time. 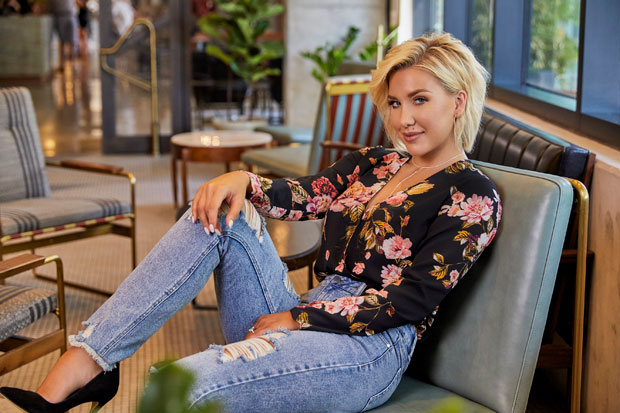 “On my endometriosis vlog that I posted on my Instagram, I highlighted those things — there are screenshots of comments by people and all the hateful things they were saying… I kept it to myself for so long,” Savannah said on the podcast. “I think the whole point in saying that is that you never know what someone’s struggling with, so you need to watch your words. Regardless, why spew hatred towards anyone? But especially like I said, you don’t know what people are dealing with, and some people are just better at hiding it than others.”

This season on Chrisley Knows Best, Savannah’s storyline follows her most recent surgery that happened in the midst of the pandemic. “It was a very scary moment for me because it was in the midst of COVID, and I was originally told I couldn’t have anyone there with me. I’m always used to my mom and being there, if I’m ever doing anything, so I was definitely scared and just kind of felt alone,” she said of her third surgery she’s had for the disorder.

The process has made Savannah consider possibly freezing her eggs. “I’ve said that if I don’t have my first kid by the time I’m 25-27, then I will freeze my eggs because I’ve been blessed to have a job that allows me to have the financial means to do so,” she explained. “I’ve had doctors tell me that it’s a great insurance policy because you just never know. So, that’s that’s definitely the route I think I’m going to go.”

She added that her dad, Todd Chrisley, has been incredibly supportive and concerned throughout her endometriosis journey. “He was so worried when I went to have my surgery…He was reading so much… he was reading off the list of all the bad things that could happen and he was freaking out!” she laughed. “He’s done a lot of research to try and understand how I’m feeling and what I’ve been going through, and it wasn’t until he took the time to do the research that he truly understood.”

Savannah continued, “For me, I definitely appreciated that because a lot of men don’t do that. A lot of men don’t take the time to understand and do their research. Because if you did your research, you would definitely have a little more sympathy and understanding for how we, as women who are dealing with endometriosis, feel.”

Be sure to tune in to Chrisley Knows Best, season 8, on USA Network at 10 PM ET every Thursday!

Ashton Kutcher: All Lives Matter people shouldn’t be cancelled, should be educated