Sports Illustrated Swimsuit’s 2020 rookie Anita Marshall explains why she cried ‘like a big baby’ after seeing her photos. The model discussed what it was like posing for the outlet in the Dominican Republic, wanting to feel represented and how one former SI Swimsuit cover girl inspired the star to pursue her dreams.

Anita Marshall never dreamed she would one day see herself in Sports Illustrated Swimsuit.

The model, now a rookie, is featured in the magazine’s 2020 issue, which is on newsstands now. The issue includes Kate Bock, Jasmine Sanders and Olivia Culpo as this year’s coveted cover girls. For her first spread, Marshall headed to the Dominican Republic, where she proudly flaunted her curves for the magazine.

According to SI, Marshall was discovered by submitting her photos to Dorothy Combs Models, never realizing that there was ever a possibility she could model. Since then, Marshall has gone on to work with Macy’s and Nordstrom, where she represented women like herself who are sizes 14/16.

Marshall spoke to Fox News about why she cried like “a big baby” after seeing her photos for the first time, the one moment that almost made her give up modeling for good, and why a former SI Swimsuit cover girl became an idol of hers.

Fox News: What was it like shooting for SI Swimsuit in the Dominican Republic?
Anita Marshall: There were so much nervousness and excitement. Those were my two emotions. I’ve visited DR multiple times before so I was totally comfortable with the culture, the people, the food – everything. So I was excited to go back and go to a different part of DR that I haven’t been before. But I was nervous — very nervous. I didn’t know what to expect. I mean, this is Sports Illustrated. This is a magazine I’ve seen growing up as a kid… It was definitely humbling.

We also got to visit some high school girls in one of the schools up there. They were amazing — so welcoming and kind. They would try to teach me Spanish. I’ve been trying to learn Spanish since high school. I took it four years ago. They were trying to get my slang down for me.

We cried, we laughed. There were just so many types of emotions. But I have to say it was a special trip. And I didn’t know what to expect out of the trip. And that day was the best, one of the best days I’ve ever had in my life, honestly. I left a little piece of my heart there for sure. The girls did it for me. I still have their WhatsApps and check in on them.

Fox News: What was your initial reaction when you saw your photos for the first time?
Marshall: I started crying. I didn’t think I’d be so emotional, but I honestly just started crying. I think that’s when it became a reality of what was happening. I called my mom the next day and I was like, “Is this happening to me? Is this real?” And she’s like, ‘Yeah girl, you deserve it. You’ve got to claim it.”… But yeah, I cried. I cried like a big baby.

Fox News: What does it mean for you to be in a magazine like SI?
Marshall: It means a lot. Growing up, I didn’t see myself represented as a standard of beauty, whether that be in television, whether it be in a magazine — no matter where it was. I didn’t see me. So being able to see that image that a little girl can see and say, “Oh wow, that girl has braids like me, how cool.” 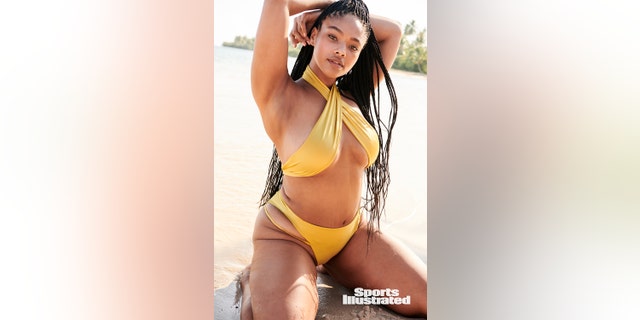 Just being able to be that representation for another girl means the world to me. Another girl doesn’t have to grow up feeling, “Am I beautiful? I don’t know because that’s not what I see when I turn on my TV or when I go to the store and I look at a billboard.”

Fox News: How important is it for a magazine like SI Swimsuit to show that beauty does not come in one size?
Marshall: Extremely important. Every girl looks at that magazine. And when you give your reader representation, it’s life-changing. It’s not just, “Oh here’s a girl in a magazine.” It’s more like, “Wow, look at that girl in the magazine. She looks just like me.” For example, if you grow up and you don’t see a female doctor, you’re going to think it’s not an attainable goal or something you can do. But if you see it, you will feel it’s something you can do, too. So when SI gives girls like me a platform, it’s giving every girl a platform because she’s being seen and heard.

Fox News: Growing up, was there an SI model that spoke to you?
Marshall: Of course, Tyra [Banks]. I mean, that’s the one image I had in my head where it was like, “Oh wow, she kind of looks like me. She’s brown. She has a little bit more curves than the rest of the girls. That’s the one girl I looked at where I was like, I think I see me a little bit.

Fox News: Looking back at your career, was there ever a moment where you wanted to give up?
Marshall: I had a situation where I was invited to a private casting for a huge TV show that we all see. We didn’t have any money. My mom gathered what she could. We finally made it to New York. The next day was my casting. I get into the building.

I come into this huge conference room with maybe a thousand girls. I’m there for six hours. I get called into a smaller room. So you’re all lined up around the perimeter. Once it’s your turn, you go up to the front of the room. You say your name, your age, where you’re from and how much you weigh.

… I told them how much I weigh. One of the ladies looked at the other and said, “She’s too big.” She looked at me and said, “Thank you for your time.” It was like, I wasn’t enough because I was a certain size. And I felt like a failure…. That was the worst feeling I’ve ever had in my life. And so I said, “You know what? Modeling is just not for me. I’m going to be a makeup artist. Everything is not for everyone. I’ll just focus my energy on what I know I’m good at.”

That’s how I dealt with the situation. But… higher powers had different plans for me… [But looking back], I just wasn’t supposed to do it at that time… But you know, [that woman] was just doing a job and I can’t be upset at her. Maybe she should have done it a little differently to protect the skin of a 17-year-old and her dream.

But you know what? Everything happens for a reason. I think that was my first experience to build a tougher skin. It was showing me that you’re going to have no’s. People are going to say no. You’re not going to be everyone’s cup of tea. But you just have to keep doing it because there will be a yes.

Jordyn Woods Is Taking the High Road With Khloe Kardashian — Will It Last?

Bradley Cooper Rocks David Bowie T-Shirt At The Beach 2 Days After Reunion With Jennifer Garner
We and our partners use cookies on this site to improve our service, perform analytics, personalize advertising, measure advertising performance, and remember website preferences.Ok