Home » Celebrities » Sydney Sweeney and I Are Crying Because Zendaya Made Emmys History (Again!)

To quote the great Michelle Obama, “Girl, you have done it again, constantly raising the bar for us all and doing it flawlessly. I’d say I’m surprised but I know who you are. I’ve seen it up close and personal.” Well that, dear reader, is how I and Sydney Sweeney (see pic below for proof 🥺) personally feel about Zendaya’s *massive* Emmys win this evening. 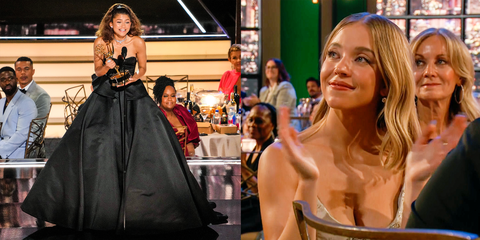 Not only did Zendaya earn the distinct honor of Outstanding Lead Actress in a Drama Series, but she (once again!!) made history at the awards ceremony by becoming the youngest-ever two-time winner of the category. (In 2020, she took home the same distinction—also for her performance in Euphoria—against frontrunners Jennifer Aniston and Laura Linney.) Tonight was especially meaningful, as the win means she’s also the first Black woman to win the Emmy for Lead Actress in a Drama Series twice. 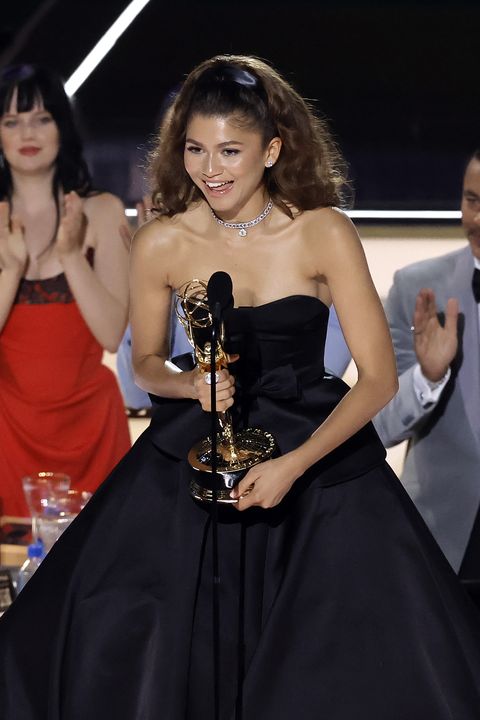 The actor’s speech was as wonderful as the feat itself, and she thanked every single person who helped create a “safe space to make this very difficult show.” She also expressed gratitude to her friends and family and Euphoria creator Sam Levinson for “sharing Rue with [her].” She ended by confessing that, “Anyone who has loved a Rue or feels like they are a Rue, I want you to know that I am so grateful for your stories, and I carry them with me, and I carry them with her.” TL;DR: It was a tear-jerking moment, and if you wanna relive it and cry just a liiiiiittle bit more (hi, me!), watch it again here:

Zendaya’s speech for winning ‘Outstanding Lead Actress in a Drama Series’ at the 2022 Emmy Awards! pic.twitter.com/LWb59LK3fP

In addition to the acting nod, Zendaya was *also* nominated as an executive producer of the groundbreaking series, which was up for a total of 16 nominations tonight including Outstanding Drama Series, two nominations for Outstanding Original Music and Lyrics for Season 2’s “Elliot’s Song” and “I’m Tired,” and Outstanding Casting For A Drama Series. *le sigh* *patience for season 3 lessens considerably*