Don Wales, the nephew of land and water speed record holder Donald Campbell, has discovered hundreds of unseen photographs of his uncle in action aboard his jet-propelled boat Bluebird.

He has been cataloguing and curating the images, taken by a motorsports photographer who became a trusted member of Campbell’s team.

The photographs were shot by the late Manchester-based photographer Geoff Hallawell and feature Campbell testing boats and breaking speed records in the late 1940s and 50s — before he tragically lost his life in Bluebird on Lake Coniston in 1967.

‘It really is a gold mine of treasured moments,’ says Don, a photographer himself based in Weybridge, Surrey. 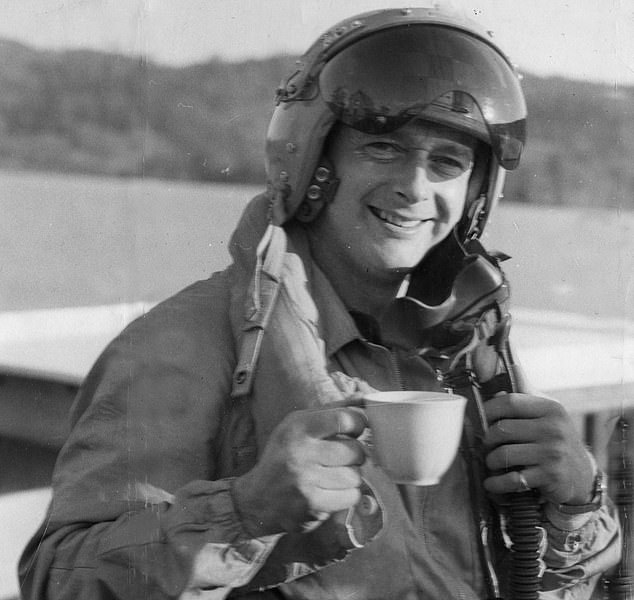 Donald Campbell pictured with a cup of tea. Don Wales, the land and water speed record holder’s nephew, has discovered hundreds of unseen photographs of his uncle 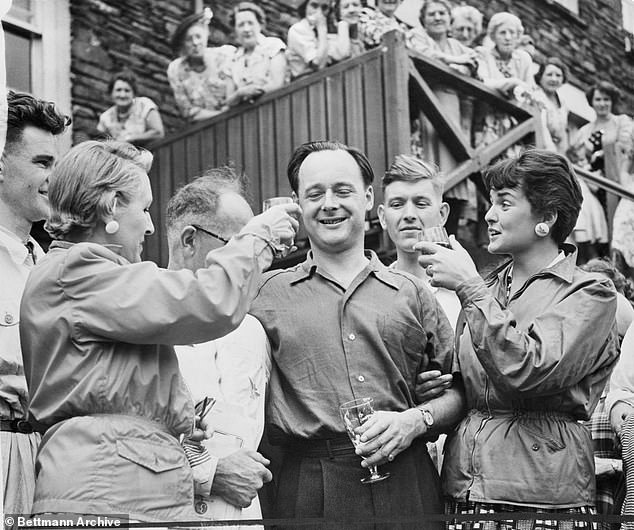 Donald, the son of Sir Malcolm Campbell, is shown with his arm around his mechanic, Leo Villa, as he is toasted by his mother, Lady Campbell (left) and his wife Dorothy after his record-breaking run in his jet speedboat ‘Bluebird’ on Lake Ullswater 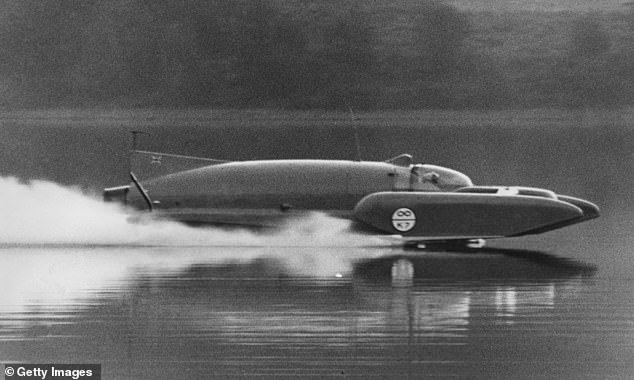 Donald makes an attempt at the world water speed record on Coniston Water, Lancashire, in his ‘Bluebird K7’ circa 1958

He is hoping to complete the task this year, which marks the 100th anniversary of his uncle’s birth, and to prepare prints for sale.

‘I’m sure Donald’s fanbase, which still seems to be growing, will be keen to have a photo of their hero,’ he says. ‘Geoff was a trusted member of Donald’s team.  Whenever he did a test or record attempt, he would invite Geoff to be official photographer.

‘Geoff was pretty brave, too, getting very close to the action on board his own boat.

‘I got to know him towards the end of his life and he trusted me to scan his negatives and catalogue his library. He was a good motor-sport photographer and he has a great archive.

‘The quality of his photographs is superb, considering he was shooting people travelling at great speed.

‘I am in awe of his skill, that back in the Fifties and Sixties he could capture an image of a boat travelling at over 200mph — and in focus.’ 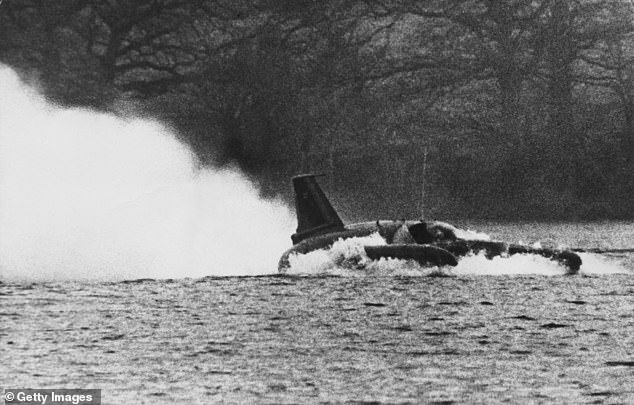 Donald in his ‘Bluebird’ at Coniston Water in Lancashire on November 24, 1966. He was preparing for his attempt to raise the water speed record to 300mph 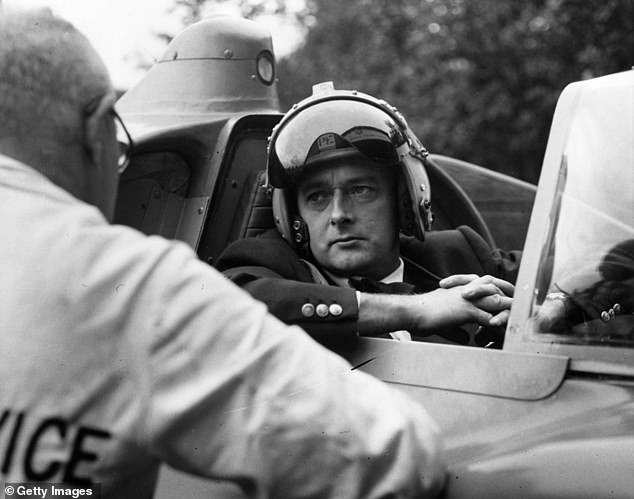 Donald in his jet hydroplane ‘Bluebird’ having a talk with his veteran mechanic Leo Villa on September 24, 1958 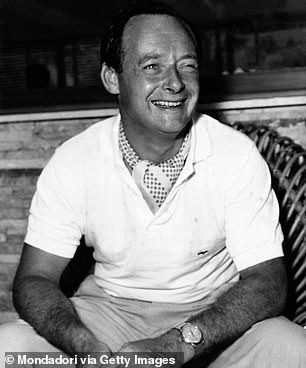 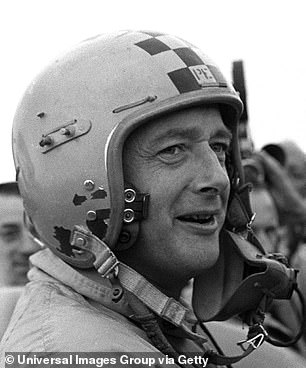 Downton Abbey star Jim Carter reveals that his actress wife Imelda Staunton — who will play the Queen in the next series of The Crown — gives him the silent treatment after performing on stage.

‘Imelda does a lot more theatre than I do. She’s incredibly conscious that people have paid a lot of money for their ticket, the train, the taxi, the dinner and things — it’s an expensive night,’ says Carter, who plays butler Mr Carson in the ITV period drama.

‘They deserve the best version of you. So she won’t drink when she’s doing a show and she won’t talk after a show. She’ll conserve all her energy for 7.30 at night.

‘It’s odd. the day is in a state of stasis, waiting for the evening.’

Lady Mary’s child is born to be Wilde

Will Lady Mary Charteris — once dubbed London’s ‘posh wild child’ — be passing her old love of partying on to the next generation?

For the 34-year-old daughter of the Earl of Wemyss has given birth to her first child, a girl, whom she has aptly named Wilde Jessie Furze.

The model and DJ, who lives in London with her musician husband, Robbie Furze, used to be a regular on the party scene with the likes of Kate Moss and David Beckham, but has since tempered her hedonism and has been sober for three years.

‘Learning to be sober has been a weird journey,’ she says. 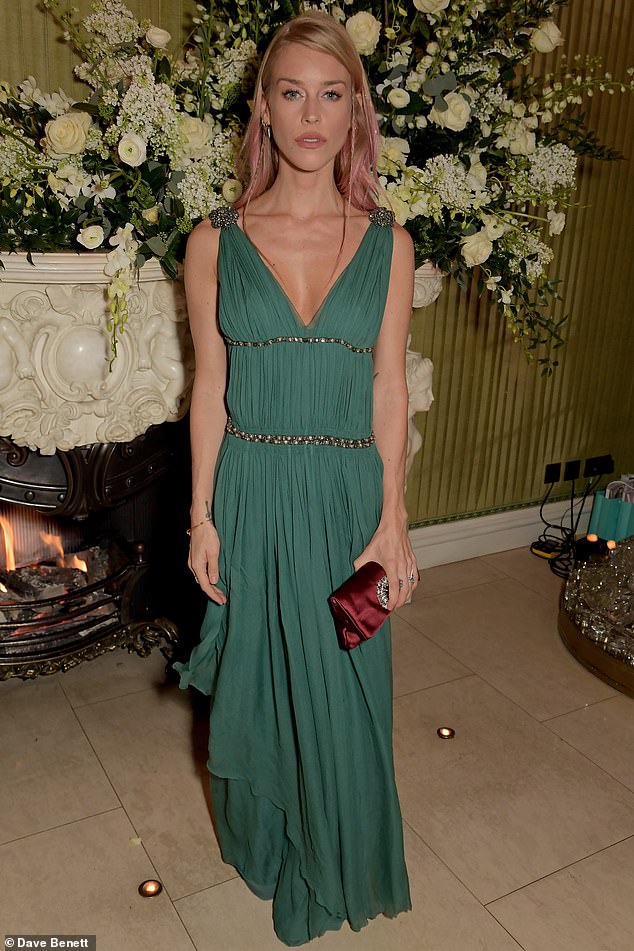 ‘I long to walk down the aisle — the aeroplane aisle. Trips have been limited to flights of fancy, but post-Covid, my motto is “have globe, will trot”. My dream destination is the Galapagos. I mean, how lovely to be in a place where there are creatures even weirder than I am.’

‘I’ve just done two double-patchwork quilts that are double-bed size. I took the trouble not to count the stitches but to work out how many there were — on one of the quilts, it was a quarter of a million stitches!’

Tigerlily purring over her new love

Queen drummer Roger Taylor’s exotically named daughter, Tigerlily, has, in the words of Freddie Mercury, found somebody to love.

The lingerie model, 26, has struck up a romance with skate- boarder and fellow model Darius Trabalza, 27, who has starred in campaigns for Tommy Hilfiger and Pepe Jeans. 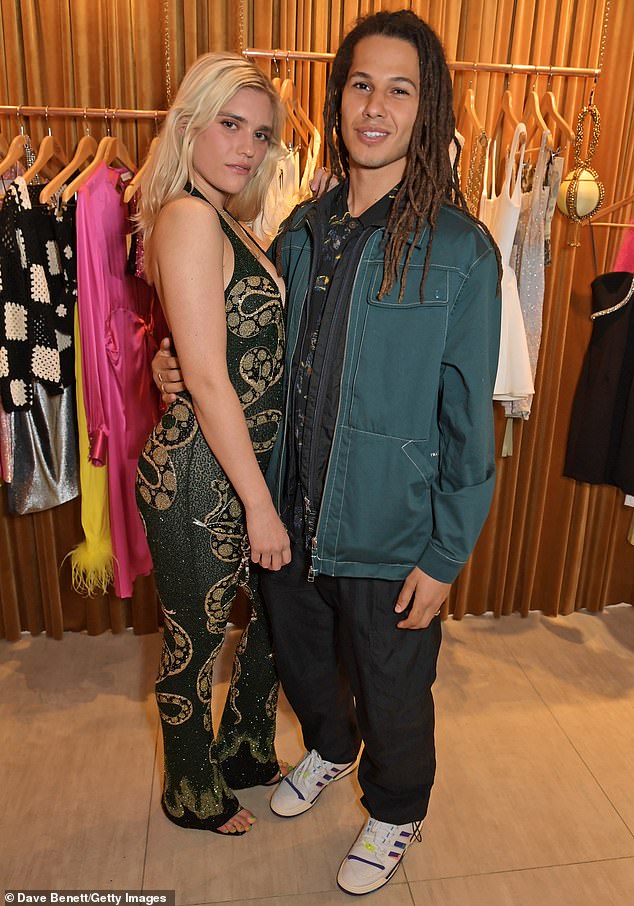 Tigerlily, whose mother is Roger’s ex-partner, Debbie Leng, has been proudly showing him off and took him shopping at Annie’s Ibiza store in Soho, where she tried on a £2,850 sheer snake-print jumpsuit.

He’s already won over her dad as the couple stayed with him at his £5million house in Surrey during lockdown.

‘It felt like a weird retirement commune. We didn’t see anyone and just hung out for two months,’ says Darius.

‘Bad Boy of Ballet’ Sergei Polunin — so called because of his penchant for partying and drug-taking while a Principal of the Royal Ballet — admits he couldn’t bring himself to read Dame Helen Mirren’s foreword in his newly published memoir.

The Oscar-winning actress, who had auditioned for the Royal Ballet School aged 13, praises his ‘high art and extraordinary physicality’ as being ‘infused with something I can only describe as a mad passion, a peeling away of the outer layer of control, politeness and discretion’.

Polunin, however, admits: ‘I actually didn’t read it. I was extremely thankful, but I didn’t want to read something about myself. ‘It’s like when a friend gets you a present and you don’t open it. Because it’s special and you want to keep it that way.’

Party treats and a touch of Zen…

The Queen’s beloved cousin Princess Alexandra threw a sumptuous feast for her granddaughter’s 31st this week. 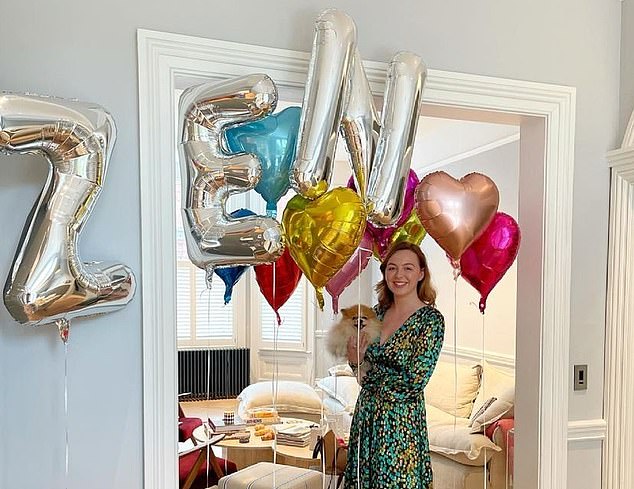 But not before her granny had invited her to the Thatched House Lodge in Richmond Park, where she was treated to sandwiches, scones, choux pastry swans, chocolate cake and champagne.

Zenouska’s mother, Marina, was dubbed the ‘royal rebel’ in 1989 after becoming pregnant outside marriage.

It led to a rift between her and her parents after she publicly accused them of ordering her to marry her boyfriend, photographer Paul Mowatt, or have an abortion.

She walked up the aisle dressed in black and Zenouska was born four months later.

This Is Why Maria Bello Had To Leave NCIS