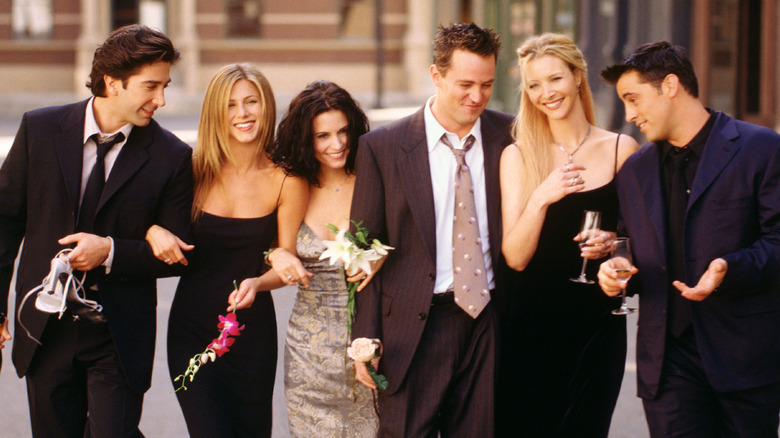 The “Friends” reunion still has fans buzzing due to all of the amazing moments, such as celebrity cameos, emotional memories, and hilarious bloopers (via US Weekly). The original cast — including Jennifer Aniston, Courteney Cox, Lisa Kudrow, Matt LeBlanc, David Schwimmer, and Matthew Perry — also came together to reminisce about their time on the iconic series, as well as the cultural significance of the show. The gang filmed the unscripted television special in multiple ways, including candid conversations between them and a fun-filled trivia game. They also sat down in front of an audience with host James Corden for an interview, where they dished some surprising details, like the fact that Aniston and Schwimmer were crushing on each other hard during the early days of filming the series.

During the interview, the gang revealed where they believe all their characters would be today. Aniston admitted that she thought Ross and Rachel would be married with a few kids and that Ross would continue his career playing “with bones.” Meanwhile, Monica and Chandler would be raising their twins, and Cox says that even though the kids would probably be graduated, she’d still be competing with other moms and running the bake sales. Kudrow claimed that Phoebe and Mike would have kids, who would be a bit different — like her character — and that she would advocate for them. Meanwhile, LeBlanc says Joey would own a sandwich shop. The gang fell back together so effortlessly, even though they were kept apart before filming. 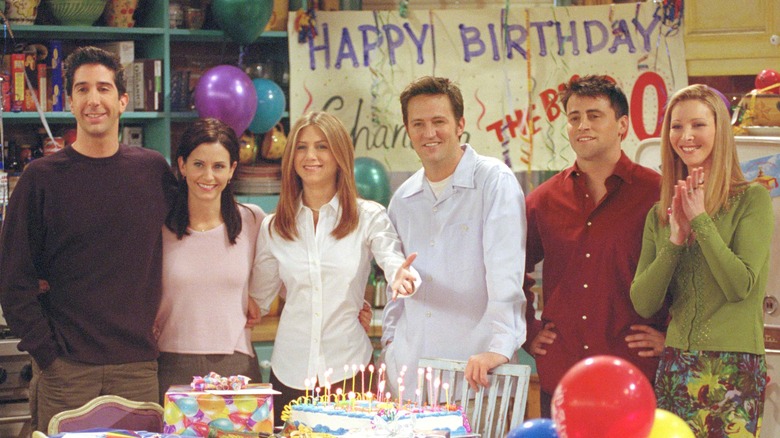 Entertainment Weekly reports that director Ben Winston wanted the “Friends” reunion to be as authentic as possible, capturing the magic of the cast seeing each other — and rebuilt sets from the show — for the first time. So, he asked that they be kept apart before filming. “I always wanted them to be apart that morning,” he said. However, his plan was almost foiled when he found their set trailers lined up right next to each other. “I was so upset. I really wanted that moment to be real. So I immediately got the team and we built tents outside of their doors so that they wouldn’t see each other,” he said. He also texted all the cast members and begged them not to interact until filming started. “Luckily they played along, so that moment when they see each other on set is the first time they’ve all six been together [since the show ended], apart from one dinner at Jen’s house.”

As for the sets, which included Monica and Rachel’s apartment, Joey and Chandler’s apartment, and Central Perk, they were rebuilt using as many of the original items as they could find. Whatever they couldn’t find, they bought online, including a replica of the cookie jar in Monica’s apartment, which Lisa Kudrow took home following the show’s final episode. It seems that all of the hard work paid off. The reunion became an instant hit with fans, who loved taking a stroll down memory lane with their favorite “Friends.”