Leilah Babirye’s sculptural figures and heads succeed where many fail: They build convincingly on universally revered traditions from the past — in this case the sculptural styles of West Africa. Ms. Babirye carves wood, which she then burns and waxes to achieve a luminous matte surface that gentles down her sometimes brusque forms. Or she translates this vocabulary into clay, using celadon green glazes and round Buddha faces reminiscent of Chinese art.

The work in “Kuchu Clans of Buganda,” her second solo show at this gallery is astutely multicultural, deeply felt and even autobiographical. (“Kuchu” is a secret code for “queer” in Ugandan gay and transgender circles; Buganda is a kingdom in Uganda from which her family is descended.) Her New York debut here two years ago was small and a bit tentative, filling one of the gallery’s small office spaces. This one fills all three and seems assured to the point of triumphal, which it has every right to be. 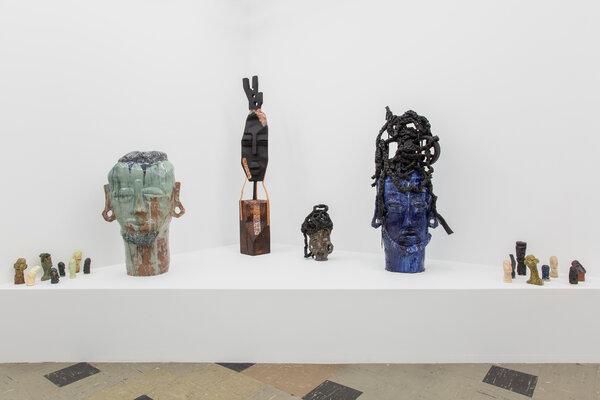 Ms. Babirye has lived her version of the American dream. Born in Kampala, Uganda, in 1985, she sought asylum in the United States in 2015, after realizing that, being queer, her education, livelihood and well-being were threatened by the country’s virulent homophobic laws. In New York, she experienced bouts of homelessness, but kept working — including in a friend’s backyard in Brooklyn — primarily with scavenged materials.

As an artist, she is equally at ease with the monumental and the hand-held, with found and manipulated materials. Ms. Babirye’s wood pieces especially are supplemented with assemblage elements, including scraps of copper and aluminum, nails and steel bands, as well as bicycle chains and padlocks that reflect her early employment here as a bike messenger. So do the braided inner tubes that resemble leather and form headdresses or mock hair. She titles her works using their clan names, which are usually based on those of plants or animals, including lungfish, antelope and mushroom. Time spent in this show is richly rewarded.

For Luigi Ghirri, an Italian photographer of memory and melancholy, a picture wasn’t something you took; it was something you fashioned. His plaintive images of interiors, billboards, blank walls and empty squares imbue everyday sights with a metaphysical charge, and display a modesty that belies their careful construction — tightly cropped, printed at small scale and usually shot with Kodachrome color film, faded and softened like a half-remembered dream. More than two dozen of his photographs, cerebral and bewitching at once, appear in a new show, “The Idea of Building,” at Matthew Marks, curated by the painter Matt Connors and on view both in the gallery and in a robust digital representation.

Ghirri was born in 1943 and died before his 50th birthday; he lived and worked in Emilia-Romagna, in Italy’s prosperous industrial center. There he found a landscape in which a rich Italian history crashed into commercial, personal or just banal modern life. An empty nightclub, a frayed record sleeve, the red hood of a car in the Ferrari factory: These unprepossessing objects and settings become, through Ghirri’s rigorous framing, fragments that seem to hang between reality and artifice. The photographs’ muffled coloring — whites gone sallow, reds and blues tempered, grays turned beige — may seem now a shortcut to nostalgia (especially to a younger generation weaned on Instagram one-touch filters), but the truth is that Ghirri’s art seems wrenched out of time entirely. In one heart-stopping picture, Ghirri places a worn bowler hat atop a scratched, pitted portrait of some forgotten woman of the 19th century; the doffed hat is a compliment to the past, and an act of leave-taking from the present.

During the lockdown, I read a novel by another nostalgist from Emilia-Romagna: “The Garden of the Finzi-Continis,” Giorgio Bassani’s aching reminiscence of the last years of a Jewish family in Ferrara. “Objects also die, my friend,” says Bassani’s young heroine — an embrace of beauty and transience affirmed by every one of Ghirri’s photos. “And if they must also die, then that’s it, better to let them go. It shows far more style, above all.”

After serving in Austria’s army during World War I, the philosopher Ludwig Wittgenstein spent some time as an elementary schoolteacher. Finding no spelling book suitable for his rural Austrian students, he decided to compile one himself. This fall, the artist Paul Chan, whose varied art career has included animation and inflatable tube-man sculptures, published the first-ever English-language edition of what Wittgenstein called the “Dictionary for Elementary Schools” through his own Badlands Unlimited Press.

Mr. Chan illustrated some entries, too — sparingly in the book itself, but extensively around the walls of Greene Naftali Gallery in the exhibition “Drawings for Word Book by Ludwig Wittgenstein.” Working in black ink at a large scale, and with his left hand (he’s a righty), Mr. Chan achieves a thrilling kind of naïveté. The drawings feel at once guileless and fully formed, like thoughts plucked fresh from the artist’s head.

Some of these thoughts depend like jokes — or like words — on a delicate interplay between multiple possible meanings. To illustrate “versäumen (to fail to do something),” Mr. Chan draws a tourist at Auschwitz taking a picture of the death camp’s entrance sign, “Arbeit macht frei,” or “Work sets you free.” The sign certainly failed to deliver. But the Shoah also failed to murder every Jew in Europe, and the tourist must not be getting what she’s looking at, either, if her response is to pull out her smartphone.

Other drawings take in this year of pandemic and protest with a panoramic sweep. Monuments topple, horses cry and, in “Spekulieren (to speculate),” happy ghosts rise from dead bodies to a heaven which, like the future, we can only imagine — but which also exists, in a way, in the drawing right in front of us.

Kylie Jenner And Khloé Kardashian Did 11 Shots, Tried To Do Their Makeup, And The Results Are Wild