Home » Entertainment » 30 Years After the Fall of the Berlin Wall, East German Art Gets Its Due

LEIPZIG, Germany — A young woman and man are submerged in dry, cracked earth. Only their hands and faces are visible; they seem to be trying to pull themselves out.

That 1990 painting by Norbert Wagenbrett, called “Aufbruch” (“Awakening”), is part of a sweeping new exhibition staged for the 30th anniversary of the peaceful uprising that culminated in the fall of the Berlin Wall. The show, running through Nov. 3 at the Museum of Fine Arts in Leipzig, is just a few hundred yards from the church where activists began regularly gathering in 1989 to push for change in the stifling, authoritarian East Germany, officially known as the German Democratic Republic, or G.D.R.

The exhibition, “Point of No Return,” is billed as the biggest so far of East German art, featuring 300 works by more than 100 artists, including dissidents who defied the communist regime and established figures who taught in its institutions. 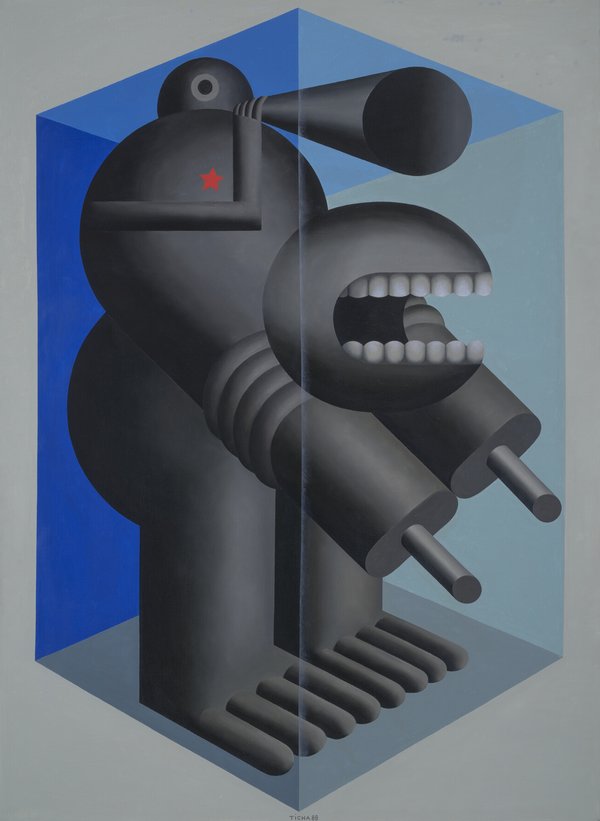 The range of perspectives on the fall of the Berlin Wall is correspondingly diverse. But the mood is almost universally somber — far removed from the fireworks and self-congratulatory speeches that usually accompany official anniversary celebrations.

Works like Mr. Wagenbrett’s “Aufbruch” are a reminder that what was largely perceived as a momentous, euphoric event in the West was, in East Germany, an era of great danger, anxiety and upheaval. The two young people in the earth are not experiencing a glorious rebirth; it is both perilous and painful.

After 1989, many East German state enterprises were sold to Western companies and taken over (or closed down); many museums and arts institutions also got new leaders from the West. A simmering resentment at these perceived indignities persists among older East Germans — a sense that the people of a country that vanished from the map were sidelined in the process of German reunification.

Paul Kaiser, one of the curators of “Point of No Return,” said that “30 years after the fall of the wall, the process of categorizing East German art within the Pan-German context is still conflict-ridden and incomplete.” The exhibition was “a further step in synthesizing the history of East German art into German art history,” he added, and in countering its “politicization and devaluation.”

After 1989, the art of East Germany was often dismissed in the West as the product of a totalitarian regime under which artistic freedom was severely limited. In 1990, in a debate that became known as the “bilderstreit,” or “battle over pictures,” the painter Georg Baselitz said in a magazine interview that there were “no artists in the G.D.R.” Anyone who could paint had left, he said — as both he and Gerhard Richter, now the two top-selling German artists, had done before the Berlin Wall was erected.

Mr. Kaiser prompted a rancorous revival of the debate in 2017, when he wrote a newspaper opinion piece expressing dismay that the main showcase of modern art in Dresden, a city in the former East Germany, had consigned art produced under the dictatorship to the depot. The museum’s director, Hilke Wagner, who refuted Mr. Kaiser’s claim, was inundated with hate mail.

The debate became a proxy battlefield for a host of festering East German grievances. The Dresden museum, the Albertinum, responded by staging a show of East German art in 2018, accompanied by a program of talks and events aimed at bringing the public into the museum for open discussions.

Other institutions in the former East Germany, including the Museum of Fine Arts in Leipzig and the Moritzburg Art Museum in Halle, have picked up the baton, unearthing stores of East German art from their depots and retooling their permanent displays to raise the profile of the works.

But gaps in museum collections remain — particularly in the case of artists who were either dissidents or working under the official radar. More than 70 percent of works on show in “Point of No Return” are loans, many from the artists themselvesThat allows for plenty of discoveries. One room in the show is dominated by a series of melancholy large-format paintings called “Passages” by Doris Ziegler, a Leipzig artist whose work has rarely been exhibited.

“In 1988, we all thought the G.D.R. would stay as it was till we die,” Ms. Ziegler said in a recent interview. “The situation was ridiculous but also threatening. The climate was gray, it was moribund. Best friends and colleagues had left, and I was constantly asking myself whether I should leave, too.”

The “point of no return” referred to in the exhibition’s title is Nov. 9, 1989, the night when crowds of East Germans breached the Berlin Wall. The crowds streaming across the border are captured in a 1989 painting by Trak Wendisch as a river of light against a lugubrious violet and black cityscape.

But the show also examines what Mr. Kaiser called “the cracks in the wall” that began developing in the early 1980s. The East German regime was among the most rigid in the eastern bloc in rejecting the avant-garde in the 1950s and ’60s, dismissing art that was abstract or expressionist as “decadent,” “formalistic,” or “revisionist.” But it began to loosen its grip on creative activity, starting in the 1970s.

“The fall of the Berlin Wall was not an instantaneous change for artists; it was the symbolic culmination of a process,” Mr. Kaiser said in an interview. “There was a momentum toward it, a processing of winning back artistic freedom.”

From the early 1980s, pockets of relatively free artistic expression began to develop in ramshackle apartment blocks in dilapidated districts of big East German cities, he said, including Neustadt in Dresden and Prenzlauer Berg in Berlin.

Many of the artworks of this era address a feeling of entrapment and desperation to escape. A 1984 work by Stefan Plenkers, “Boat Cemetery,” depicts a beach strewn with fragments of boats and the heads of two people with their backs turned to the viewer, as though staring out to sea longingly, but stranded because the vessels are all broken. A 1983 work by Mr. Wendisch, “Man With Suitcase,” shows its subject crossing a demarcation line from East to West Berlin.

Yet freedom, when it came, was not unequivocally welcomed. Perhaps one of the most unnerving works in the show is by Willi Sitte, a committed socialist and the long-serving president of East Germany’s official artists’ association.

For some, he was the epitome of a “state artist,” but in the 1960s, he fought for greater artistic independence and was put under surveillance by the Stasi, East Germany’s secret police. His 1990 work, “Erdgeister” (“Earth Spirits”) shows the artist upside down, his head buried in the mud. All around him are East German workers in the same position. For Mr. Sitte, the world had been turned on its head.

Point of No Return
Through Nov. 3 at the Museum of Fine Arts in Leipzig, Germany; mdbk.de.

KOWGA Partners with UNION For Its First Unisex Collection