Home » Entertainment » 7 Things to Do This Weekend

Our critics and writers have selected noteworthy cultural events to experience virtually or in person in New York City.

A ‘Garden’ of Tarot Delights 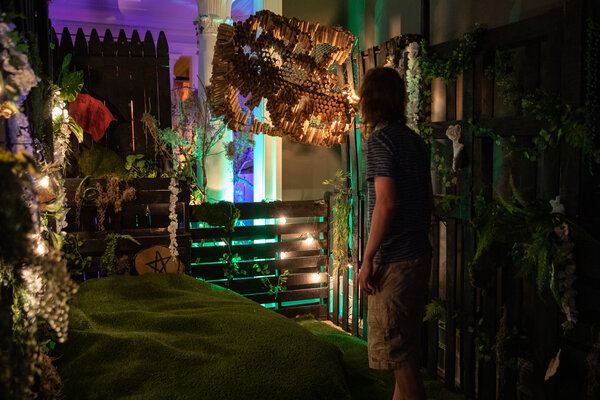 Wandering in a private garden is no longer reserved for literary heroines, supernatural creatures or the obscenely wealthy. At the Cell’s “Garden of Eden” in Manhattan, individual audience members can get lost in a sumptuous labyrinth created by the artists Ereka Duncan and Jaclyn Atkinson.

The duo, who work together as Dark Matter Immersive, were inspired by New Orleans folklore, mysterious backwoods filled with exotic flowers and tarot cards. Surprises await at every turn, as the pieces in the installation invite audience members (masks are mandatory) to immerse themselves in their own heroic journey.

Cups, pentacles, swords and wands, the four suits in a tarot deck, are seen throughout the labyrinth and work as motifs meant to inspire introspection and reflection. The 50 minute session (everything is sanitized before the next wanderers arrive) ends with a virtual tarot reading by Melissa Madara, an herbalist and folk witch.

The “Garden of Eden” is open through Oct. 31, every Thursday to Saturday. Prices start at $40 per person. An upgraded experience (up to $340 for a group of four) includes a tasting menu rooted in the themes of milk and honey or the deep forest (offered only on Saturday nights), wherein nature-based treats prepared by a private chef complete the “Alice in Wonderland”-like adventure.
JOSE SOLÍS

In a year when many artists have been forced to create at home, Fiona Apple inadvertently set a gold standard. The singer-songwriter’s fifth studio album, “Fetch the Bolt Cutters,” came out in April to near-universal acclaim; while recorded well in advance of any lockdown measures, it was created almost entirely at Apple’s house in the Venice Beach neighborhood of Los Angeles. The album’s idiosyncrasies — dogs barking (five canine collaborators are credited), body parts and pieces of furniture retooled as percussion instruments, mistakes caught on tape and left there — gesture to its homespun origins. Such intimate trappings are a natural fit for Apple’s notably personal writing.

As part of this year’s virtual New Yorker Festival, Apple will perform and take part in a conversation with Emily Nussbaum, The New Yorker staffer who wrote a glowing profile of Apple in March, ahead of the album’s release. In a typical year, if this event were taking place in person, it would likely sell out. Though the digital format has its limitations, one silver lining is its potential to reach a much wider audience.

Tickets for the event, which will stream live on Saturday at 8 p.m. Eastern time, are available at festival.newyorker.com for just under $20.
OLIVIA HORN

Art Walks of the Augmented Kind

Artists have had a strong but uneven history of incorporating technology, with digital and new media art coming in and out of favor more than a few times over the past 20 years — much like some of the now-defunct online platforms themselves.

One of the newest additions to the digital art repertoire — augmented reality — is hitting the streets of New York City this month. Organized by the Contemporary and Digital Art Fair, Digital Art Month’s festival, which started last week, will exhibit more than 70 works of augmented-reality and video art in Manhattan neighborhoods such as the Upper East Side, Midtown East, SoHo, and the Flatiron and meatpacking districts, and at Industry City in Brooklyn.

The augmented-reality works will literally appear out of thin air, activated through various social media apps using QR codes located at each site. They include a giant black orb, a symbol of power and spirituality, fashioned by Valéry Grancher, on Grand Street in SoHo; and Erin Ko’s critique of ocean waste — a school of fish circling near the Pierre hotel on Fifth Avenue and at 22nd Street and Broadway.

An event map of the locations is available at Digital Art Month’s website. Select artworks are for sale on the C.A.D.A.F. online platform.
MELISSA SMITH

As a metaphor, “falling in love” is mostly dead. “Falling & Loving,” a theatrical collaboration between the director Anne Bogart and the choreographer Elizabeth Streb, put some juice back into that phrase. Vignettes by the playwright Charles Mee about the danger and mess of love were charged by a physical context: bowling balls swinging on cables and 52 buckets over the stage dropping flour, feathers, confetti and other muck.

The combination of six actorly actors from SITI Company and six daredevil athletes from Streb Extreme Action was an odd coupling, an oil-and-water mix. But the way the performers pushed through the awkwardness, carrying out their lovers’ spats as more stuff descended from the sky and the floor grew slippery and the bowling balls still had to be dodged, became a comic, affecting affirmation of love. You have to be willing to get dirty and fall.

The show debuted in 2019 as part of Peak Performances, a series at Montclair State University in New Jersey that consistently punches above its weight. But on Sunday, a recording will be broadcast on WNET’s All Arts channel (check with your cable provider) at 8 p.m. Eastern time, and will be available for all on the channel’s website afterward. It’s the first selection of PEAK HD, a new digital series of Peak Performances programming recorded by multiple robotic video cameras.
BRIAN SEIBERT

What Speech Can Teach

Representative John Lewis, who died in July, played many roles in advancing the cause of civil rights. One memorable part, however, was unlike the rest.

In 2018, Lewis portrayed himself as a cartoon bear in an episode of the PBS children’s series “Arthur.” An excerpt from that appearance is one of the highlights of “PBS Kids Talk About: Race and Racism,” a new half-hour documentary that premieres on Friday at 7 p.m. Eastern time on the online channel pbskids.org/video/livetv. (The program will also air on PBS stations — check local listings — and stream on the network’s social media platforms.)

Hosted by Amanda Gorman, who in 2017 became the first National Youth Poet Laureate, the documentary features conversations among the members of diverse families with children ages 5 to 9.

In addition to explaining its subject matter in accessible terms, “PBS Kids Talk About” teaches that authority must sometimes be challenged to defeat injustice. Viewers will see Rosa Parks — depicted here as a child — do this in a clip from the PBS animated series “Xavier Riddle and the Secret Museum.” They will also watch Arthur, an amiable aardvark, start a school lunchroom sit-in to demand hired help for Mrs. MacGrady, a beleaguered cafeteria cook.

As Lewis advises him, “There’s nothing more important than following your conscience.”
LAUREL GRAEBER

Composers working with microtonality — or with the pitches found between the notes on traditionally tuned Western instruments — are having a banner year. And that’s particularly been the case when they’re simultaneously embracing pop, rock or jazz flourishes. Microtonal projects led by the pianist Cory Smythe and the guitarist David First have impressed in the past few months. And now drummer Will Mason’s most recent works for his band Happy Place join those experimental-yet-still-catchy ranks.

Collected on an album titled “tendrils,” which is scheduled for release on Friday, Mason’s latest opus builds on his band’s 2016 debut. This time around, in addition to the two-drummer, two-guitar attack — with select strings tuned to microtonal intervals — the bandleader has added a pair of vocalists.

That expanded ensemble sound has only deepened the range of Mason’s writing. On the new album’s opening piece, “illuminations,” the singers at first execute parts that echo the quarter-tone dissonances between the guitars; in the final minutes, some of the more traditionally melodic vocal lines give the track a mournful, indie-rock glamour. And while “tarnish” wouldn’t have been out of place on the roster of K Records in the late 1990s, the two different two-part compositions that close the record firmly establish the album’s bleeding-edge bona fides.
SETH COLTER WALLS

Take a Swig. Drop Some Knowledge.

Comedy Central may have eighty-sixed “Drunk History,” but a live show inspired by that concept continues: “Drunk Black History,” which was started by Brandon Collins and Gordon Baker-Bone at New York clubs in 2019 and has moved to Zoom since the pandemic, serves up alcohol-fueled lessons about influential Black Americans.

“We want to show you guys the unknown heroes who helped pave the way for Black culture,” Baker-Bone explained during the duo’s last show on Juneteenth.

In Collins and Baker-Bone’s first show, the story of Lonnie Johnson, who was in the U.S. Air Force and NASA before inventing the Super Soaker water gun in 1989, was among the highlights. On Juneteenth, drunken comedians recounted the exploits of the singer-songwriters Bobby Womack and Sam Cooke, the journalist Ida B. Wells and the gymnast Dominique Dawes. Who will get a shout-out from Yamaneika Saunders, Vladimir Caamaño, Charles Moore and Melanie Dione when “Drunk Black History” returns on Saturday at 9 p.m. Eastern time? Get your tickets at Eventbrite ($10 in advance, $15 on Saturday) to find out.

As Collins said during the Juneteenth show, “You’re gonna learn a lot about people that are not mainstream Black folk that you don’t hear about on the History Channel or during school.”
SEAN L. McCARTHY

Kendall Jenner’s Sexiest Pics: Is She the Hottest Kar-Jenner of Them All?
We and our partners use cookies on this site to improve our service, perform analytics, personalize advertising, measure advertising performance, and remember website preferences.Ok