The artist Ai Weiwei said that he would ask the Museum of Modern Art to remove his works from its collection if the museum refuses to part ways with its chairman, the investor Leon Black, given recent revelations about the Wall Street executive’s close professional association with the convicted sex offender Jeffrey Epstein.

The photographer Nan Goldin joined more than 150 artists who have also called for Black’s removal from MoMA’s board. And at Black’s alma mater, Dartmouth, there are growing calls for his name to be removed from the college’s visual arts center.

The pressure is building at a time when institutions are being held to account for everything from the diversity of their staffs to the professional ties and actions of their trustees. But it’s also coming at a moment when colleges, museums and nonprofit institutions are starved for revenue and donations because of the economic fallout from the pandemic, leaving many reluctant to distance themselves from loyal and wealthy benefactors.

Black announced last month that he would step down this year as chief executive of Apollo Global Management, the giant private equity firm he co-founded, amid revelations that he had paid $158 million to Epstein following Epstein’s 2008 guilty plea for soliciting prostitution from a teenage girl. But Black will remain Apollo’s chairman.

An outside review for Apollo’s board, conducted by the law firm Dechert, found that Black had paid Epstein, a financier, the $158 million for tax and estate advisory services over a five-year period. Black also lent $30 million to Epstein, only $10 million of which was paid back. But Dechert said it found no wrongdoing on Black’s part.

In all, Black accounted for 85 percent of the fees raked in by Epstein following his 2008 conviction and up until his arrest in July 2019 on federal sex trafficking charges involving other underage girls. Epstein killed himself a month later while in federal custody.

Now Black’s philanthropy is coming under scrutiny, including from major figures in the art world. 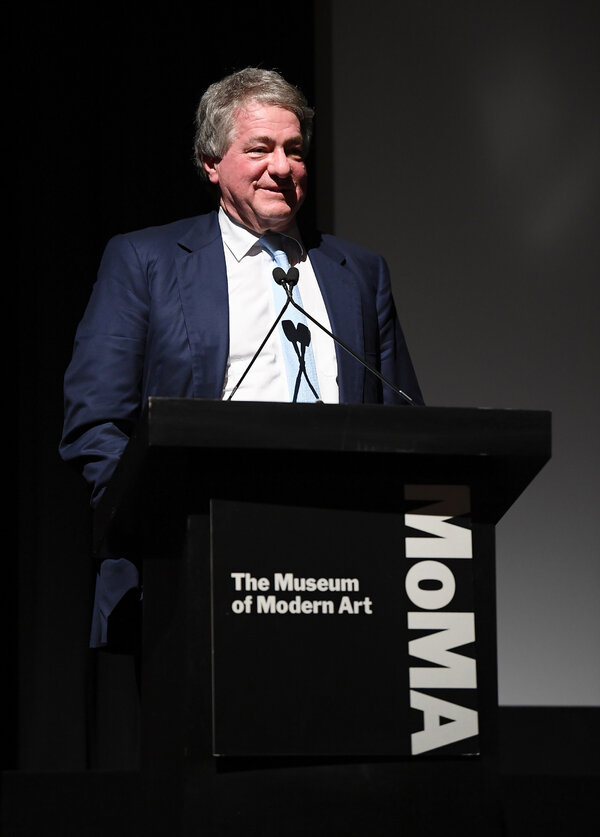 “I would feel ashamed to be associated with the MoMA if it takes a firm position in keeping someone who has been confirmed to have hurt basic values or has worked against truth and fairness,” the Chinese artist and dissident Ai said in an email interview. “If so, I hope they won’t include any of my works in their collection.”

At Dartmouth, where Black served as a trustee for nearly a decade, several students and alumni, in the student newspaper, have called for Black’s name to be removed from the Black Family Visual Arts Center. (The building houses Dartmouth’s departments of studio art, film and media studies and digital humanities.) Black donated $48 million to the center.

“This isn’t a close call,” wrote Michael Harrison, class of 2024, adding that the center “should absolutely be renamed.”

An editorial in the publication, The Dartmouth, urged the college to stop “selling the names of its buildings to the highest bidder.”

“Yes, ending the practice of naming buildings for donors would remove a fund-raising tool,” the editorial said. “But we should hope that donors give to the College for something greater than narcissism.”

Ruth Cserr, a 1988 Dartmouth graduate and a founding member of a college group that has lobbied against gender harassment and sexual violence, is among those who have signed an op-ed and submitted it to the local paper to put pressure on Dartmouth’s administration and trustees.

“In my ideal world, Black comes and says, ‘Let’s take the name down and name it for something better,’” Cserr said in an interview, adding that, to her, keeping his name on the center “does feel offensive.”

Whether such objections to Black will have any effect remains to be seen.

Philanthropy experts said the decision to revoke naming rights or ask big donors to step down from board positions is not an easy one when a situation involves guilt by association with a notorious individual, rather than proven wrongdoing by the donor. Any judgment comes down to whether the association itself is troubling enough to scare off other donors or sully an institution’s reputation, experts said.

“It is sort of a gray area for Black,” said Bill Stanczykiewicz, the assistant dean for external relations and fund-raising at Indiana University’s Lilly Family School of Philanthropy. “When artists start saying, ‘We don’t want to put our work in your museum,’ that does send a signal.”

Glenn D. Lowry, the director of MoMA, which has not indicated that it has any intention of removing Black, declined to comment.

Justin Anderson, a Dartmouth spokesman, said the school had no plans to strip Black’s name from the arts center. Black also endowed a chair for Shakespearean studies there. (Dartmouth does not plan to remove his name from that, either.)

“For his part, Leon Black has stated that he is appalled by Epstein and deeply regrets his involvement with him,” Anderson said. “To date we are aware of no allegations by anyone in law enforcement, the media or in the independent review conducted for Apollo that Leon Black engaged in any of Epstein’s shameful behavior.”

Institutions that have benefited from Black’s largess were clearly looking to Apollo for cues as to how to handle the Epstein fallout, but Apollo’s decision to keep Black on as chairman of the firm sent mixed messages. (At least one co-founder of the firm had wanted Black to step away from Apollo even sooner.)

As a result, institutions like MoMA and Dartmouth have largely remained quiet, even as voices of opposition to Black’s primacy in the nonprofit sphere have been growing louder.

In perhaps the most coordinated effort so far, more than 150 artists — including Nicole Eisenman and Michael Rakowitz — called earlier this month for Black to be removed from the MoMA board.

“Beyond his removal, we must think seriously about a collective exit from art’s imbrication in toxic philanthropy and structures of oppression,” the artists said in their statement to the art publication Hyperallergic, “so that we don’t have to have the same conversations over and over, one board member at a time.”

In a separate statement sent to Hyperallergic, the artist and filmmaker Hito Steyerl took issue with Black’s having used Epstein to help him reduce tax payments on assets, including art, adding that MoMA’s inaction on the matter “risks contaminating not only the work of artists, but the art world as a whole.

“In a time when people worldwide are suffering economically, mentally and physically,” Steyerl added, “pursuits like art assisted tax avoidance start appearing for what they are: excesses of entitlement and privilege.”

Asked for her reaction to Black’s continued service as MoMA’s chairman, the artist Judy Chicago, whose work is in the museum’s collection, said in an interview that Black exemplifies “the tawdry values of the art world.”

“Getting rid of one man may feel like a victory to some,” she added. “For me, it’s the whole system that has to change.”

And Donald Sultan, an artist known for his large flower paintings, said, “As chairman he’s a very poor person to represent the museum at that level and they probably should ask him to step down.”

Black, in the wake of revelations about how much he paid Epstein, has pledged to give more than $200 million in grants to organizations that support women’s rights and oppose human trafficking.

Despite the growing chorus of protest from artists, it may not be easy for MoMA to part ways with Black, given his past generosity to the museum (he donated $40 million in 2018) and the potential of future gifts and loans from his extensive art collection.

Black lent the museum Edvard Munch’s 1895 version of “The Scream” in 2012, for which he’d paid nearly $120 million, the highest price at auction at the time. He also paid $106 million for “Bust of a Woman,” which was featured in the museum’s acclaimed 2016 Picasso sculpture show.

His personal collection is estimated to be valued at $1 billion and much of it is held by two corporate entities: Narrows Holdings and AP Narrows. The National Gallery of Art in Washington listed Narrows Holdings in 2018 as an entity that lent an exhibition to the museum.

The outside report compiled by Dechert for Apollo said that Epstein had worked with Black’s family office on providing advice on art loans and how to handle a dispute between Black and another big collector over the Picasso bust.

The report also said that Epstein was instrumental in “obtaining a potential advisory opinion from the New York State Department of Taxation and Finance regarding a contemplated transaction involving Black’s art.”

Lawyers from Dechert did not provide any details on that advisory opinion but two of Black’s companies are currently involved in a sales-tax dispute with New York tax officials over the sale of two Cézanne watercolor paintings. The dispute with New York also involves a separate sale of a Picasso painting with another wealthy money manager.

Last March, an administrative law judge ordered a hearing on a claim by the New York tax division that the company that was used to buy and sell the three paintings did not collect sufficient New York State sales tax and was short some $3.6 million.

The dispute is still pending.

This Detail in Carrie Underwood’s Selfie Is #ClosetGoals

The Kentucky A.G. Is Not Happy With Megan Thee Stallion’s ‘SNL’ Performance