MUNICH — The most immediately striking aspect of this year’s Theatertreffen, the annual showcase of the best of German-language theater, is the numbers.

To make their selection, the 2020 festival jury watched 285 productions in 60 cities across Germany, Austria and Switzerland. The resulting program, which runs until Monday, is dauntingly full, with 80 hours of streaming events on a digital festival platform.

When the seven jurors announced their selection in February, the festival hoped to hold in-person performances. But a third wave of the coronavirus, which has gripped Germany in recent months, meant that for the second year in a row, Theatertreffen was confined to this online presentation.

Since the start of the pandemic, German playhouses have been uniquely proactive in adapting to social distancing restrictions. Many have devised new theatrical formats, including immersive live productions for solo spectators or digital-only productions that have enlisted social media, video messaging apps, chat rooms and video gaming technology to create art that responds to our circumstances.

Keeping up with this creative proliferation has been occasionally exhausting; more consistently, it has been inspiring to see how theater here — much of which receives robust state funding — has refused to lie down and die. 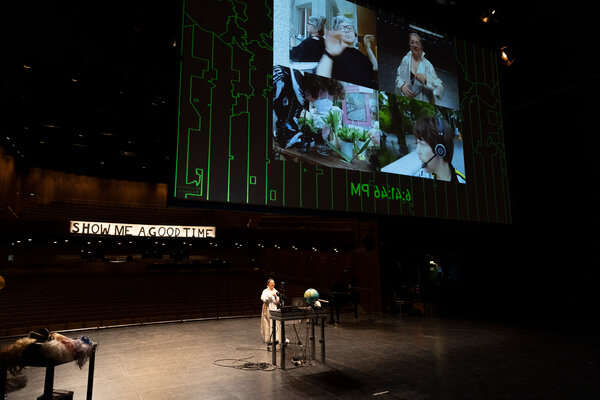 I had hoped that this year’s Theatertreffen would take the full measure of this challenging year, so I was dismayed that the jury chose only one “corona show” among the 10 productions selected for the festival.

But what a production it was!

“Show Me a Good Time” by the German-British theater collective Gob Squad, was a wild noon-to-midnight performance that whizzed between the empty stage of the Berliner Festspiele and various participants in the outside world, discussing life during the pandemic, conducting man-on-the-street interviews about theater and soliciting artistic suggestions from callers. The performers at the theater, driving through Berlin and traipsing around England were connected via headsets and cameras in what often had the aspect of a theatrical telethon.

Yet despite the marathon running time, it was accessible and down to earth. By design, it was a show that one could dip into and out of at will; over the 12 hours, more than 3,000 people popped their virtual heads in.

While meditating on life, theater and the intersection of the two, the performers routinely injected their largely ad-libbed performances (in German and English) with generous doses of humor and silliness. One example: For two minutes each hour, they dropped everything and screeched with laughter.

While none of the other productions provided a similar degree of meaningful reflection on life during Covid-19, the reality of the pandemic clearly influenced the aesthetic choices behind several of the other streamed productions.

Theaters had already reopened, at limited capacity, in Switzerland when a livestream of Schauspielhaus Zurich’s “It’s Only the End of the World” opened Theatertreffen last week. But the director, Christopher Rüping, a regular at the festival who has been a prominent proponent of new digital possibilities for theater during the pandemic, decided to keep the live audience out. Instead of performing for a handful of spectators, the actors addressed cameras. The result, watched online, was a hybrid theatrical experience reminiscent of cinéma vérité.

Roving hand-held cameras captured Jean-Luc Lagarce’s 1990 play about a gay man who returns to his estranged family after a long absence. Most impressive was how effective the livestream’s filming style was at capturing the nuances of the production’s fine actors, including Ulrike Krumbiegel as the nervous, broken matriarch and Wiebke Mollenhauer and Nils Kahnwald as a pair of emotionally scarred siblings.

This was also the second year that Theatertreffen’s jury voted to adopt a quota system to ensure that at least half the productions would be directed by women or majority-female collectives. (A recent study by the European Theater Convention that surveyed 22 countries found that there are six men for every four women working in theater).

Last year’s Theatertreffen program looked quite similar to earlier installments despite the marked increase in female-led productions. This time around, though, an unofficial feminist theme seemed to reflect the festival’s focus on female theatermakers.

By far the most didactic was “NAME HER. In Search of Women+,” a 7½-hour multimedia performance-lecture, directed by Marie Schleef, about overlooked women throughout history. Standing in front of a triptych of large iPhone-like displays of biographical information, charts and videos, the actress Anne Tismer gave an engaging performance that, however heroic, did suffer on video. Watching her rattle off this A to Z of brilliant and unjustly ignored woman, it was hard not to imagine it would have had an entirely different immediacy and energy if experienced live.

One of the most prominent female theatermakers in Germany, and a frequent presence at Theatertreffen, is Karin Beier, who leads the Deutsches Schauspielhaus in Hamburg. This year, her production of Rainald Goetz’s “Empire of Death” served up a savage indictment of America’s post-9/11 military adventures abroad and democratic degeneracy at home, and it was easily the grimmest thing at the festival. I couldn’t wait for the four-hour theatrical scream to end.

After so many lengthy shows, I was also grateful for those that clocked in at little more than an hour. They provided a sense of intimacy that was missing from the more sprawling productions.

One was Leonie Böhm’s internal monologue version of “Medea*,” Schauspielhaus Zurich’s second production at the festival, which worked best as a finely tuned psychological examination of one of world literature’s most famous villainesses. In it, the actress Maja Beckmann’s Medea struggles with how Euripides’ tragedy fates her to be a child murderer, and how history will forever judge her a monster.

Staged in a large white tent, “Medea*” created an atmosphere of privacy that it shared with the festival’s most unusual entry, the fragile dance performance “Scores That Shaped Our Friendship,” a physically tender exploration of the friendship between Lucy Wilke, a performer with spinal muscular atrophy, and Pawel Dudus, a queer Polish artist and dancer.

Despite the quota system, this year’s Theatertreffen featured only one conventional play by a female playwright that was also directed by a woman: Anna Gmeyner’s “Automatenbüfett.”

We have the Burgtheater in Vienna and the director Barbara Frey to thank for the rediscovery of this 1932 play by the Austrian-Jewish Gmeyner. In it, she combines folk realism with symbolic elements for a parable-like tale of the common good undermined by avarice and sexual dependency, set largely in a vending-machine restaurant. The automat dominates the drab set of Frey’s dramatically incisive and impeccably acted production.

It is far and away the most traditional production in this Theatertreffen, as well as one of the best. Starting late this month, it will again be seen onstage in Vienna, where theaters have just reopened after half a year of hibernation.

Maren Morris: I Get ‘Hurt’ When People Claim I'm ‘Not Country’