When the fashion designer Peter Som was growing up in Mill Valley, Calif., his mother insisted that he learn to cook at least one meal before leaving for college. Thus, she taught him and his older sister to make one of her go-to dishes — a pared-down, crisp-skinned roast chicken, smothered in freshly ground Chinese five-spice powder (a blend of star anise, cloves, cinnamon, Sichuan pepper and fennel seeds) and served simply with steamed rice and a side of vegetables. On Sundays, either Som or his older sister would be tasked with preparing dinner — quite often the roast chicken — for the family, an arrangement that gave them an opportunity to hone their skills and gave their mother a night off.

The dish became a nostalgic comfort food for Som not so much during college, but afterward, when he moved to New York. “After four years of dorm and cafeteria fare, it was one of the first things I turned to,” he remembers. Over the years, he riffed on the preparation — adding new aromatics, increasing the quantity of salt (his mom, he says, was a “health nut” who liked to avoid it) and breaking down the chicken differently — and those experiments eventually solidified into his own version of the heirloom recipe.

A while back, he learned a technique from a cooking magazine that calls for cutting the chicken below the breast and splaying the bird in a single flat layer to maximize the amount of skin exposed to hot air, thereby doubling the area that will become crispy. It’s easier than spatchcocking, where you remove the backbone, and makes for a tastier result: Bones, Som reminds us, are one of nature’s best flavoring agents. He also adds a layer of lemon and orange slices below the chicken, and a pour of rice vinegar into the roasting pan, for moisture and some gentle acid.

Som still makes the dish regularly, these days at his West Village apartment in a kitchen that, much like his clothes, balances understated style and practicality. When the designer renovated the space in 2009, he opted for open shelving, cerused oak cabinets and Carrara marble countertops: “I wanted to make sure the island and cupboards felt furniture-like,” he says. Just as important was being able to hide the mess that often accumulates in an open kitchen when cooking for friends. To solve this problem, he took a cue from professional kitchens, where the “pass” — the counter cooks use to hand over finished dishes to servers — is higher than the chefs’ work station. And indeed, in a home, too, this arrangement can conceal small mountains of vegetable scraps and mixing bowls from guests.

Still, for Som, whose repertoire has greatly expanded since his teenage years, and who reads cookbooks in bed — “there’s nothing like falling asleep dreaming about food,” he says — utility is the priority. He has a large collection of wooden cutting boards, from the pig-shaped platters on which he serves cheese courses to heavier-duty pieces he uses for carving meat and poultry. After the chicken comes out of the oven, and before he slices it on one of the two hefty Boos blocks he keeps on either side of his stove, Som lets it sit for 10 minutes or so, to make it as succulent as possible (the slight cooling allows the juices to soak back into the meat). Another important step, he says, is applying the five-spice salt ahead of cooking and letting the bird chill, uncovered, in the refrigerator for at least two hours so that its skin dries out and the salt is absorbed. As a child, he says he tended to be a little less patient: “When the chicken was resting, the skin would be so crispy and beautiful that I would sometimes just peel it off to eat it, and put the bird on the table naked.” 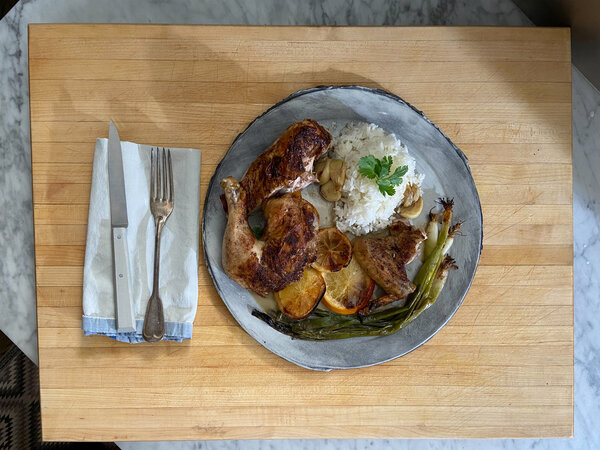 1. Prepare your chicken. Using kitchen shears, cut below the breast (above the legs) on both sides until the breast begins to release from the legs. Unfold the chicken like you’re opening a book, with the skin facing up. Place the palm of your hand on the top of the breast, which will be sticking up, and press firmly until the chicken is mostly flattened.

2. Thinly slice the citrus fruits, and peel and smash each clove of garlic. Toast the five-spice powder and salt in a sauté pan over medium-low heat for a few minutes or until they become fragrant. Transfer to a small bowl and mix with the brown sugar.

3. In a baking dish large enough to fit your chicken, layer the citrus slices and top with the scallions, garlic and cilantro. Drizzle the chicken with the oil on both sides, and coat with the five-spice mixture. Refrigerate for at least two, and up to eight, hours.

4. When you’re ready to cook, preheat the oven to to 425 degrees and pull the chicken out of the fridge. Sprinkle with salt and pepper. Add the rice wine to the pan after 25 minutes and cook for another 20 to 25 minutes, until the chicken is cooked through. Plate the chicken with the citrus, cilantro, scallions, garlic and a pile of jasmine rice.

Scientific Adviser From ‘Contagion’ Says The Movie Was A Warning