Home » Entertainment » A Whimsical Provincetown Home, Where Everything Is a Treasure

John Derian’s second home in Provincetown, Mass. — built for a local sea captain in 1789 and purchased by Derian, the interior designer and home goods retailer, in 2007 — can resemble, at times, a particularly thoughtful cabinet of curiosities. A 19th-century flower drying rack from Denmark now displays Derian’s shirts and jackets; silvery, lightly faded midcentury wallpaper hangs in a sitting room near one of the house’s five working fireplaces, the mantel of which is clustered with shells and rocks collected from the surrounding landscape. Large, oil paintings of a dog and a cat, acquired at a flea market in Paris, add whimsy to the kitchen; a copy of Rembrandt’s portrait of his mother, purchased at a Wellfleet flea market, hangs nearby.

It is, throughout, a home of unexpected contrasts. Derian’s handsome, 18th-century dining table, for example, can be swiftly outfitted for Ping-Pong with the addition of a vintage net. A room featuring a purple paint-splattered “Cape Cod floor” — inspired by a Victorian-era method of creating a textured faux finish — is offset by a low, elegant white sofa, designed by Derian and outfitted with vibrant Jeanette Farrier textiles made from vintage Indian saris.

[Coming soon: the T List newsletter, a weekly roundup of what T Magazine editors are noticing and coveting. Sign up here.] 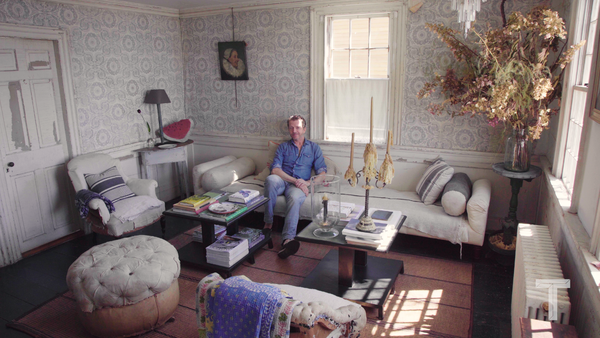 It should come as no surprise that Derian’s house is filled from top to bottom with charming, idiosyncratic details. His famous decoupage creations — on plates, trays, paperweights and much else — have the uncanny ability to evoke a lovingly imagined, somewhat nostalgic version of the past, rich in illustrations of flora and fauna from the 18th and 19th centuries. Originally from Watertown, Mass, the child of a Scottish mother and Armenian father, Derian has been designing and creating much-coveted objects in his New York studio since 1989 (he is drawn to, among many other images, rabbits, insects and human eyes, in particular). Beginning with one store in the East Village, he now has four in downtown Manhattan that sell decoupage, furniture and textiles, as well as original and antique ephemera curated from around the world. A fifth store operates out of the ground floor of his house in Provincetown during the summer season. His 2016 “John Derian Picture Book,” which features reproductions of many of the striking original images he has used in his work over the years, serves as a generous survey of his way of looking at the world.

Moving around the house and its surroundings feels, at times, like being inside those illustrations. A vegetable garden out back, in which Derian grows peas, parsley, tomatoes, cucumbers, kale, garlic and shallots, is surrounded by rows of hornbeams, which serve as a tongue-in-cheek nod to the hedges at Versailles (the house does share a birthday with the French Revolution), in addition to providing a hint of privacy for the centrally located house during the busy summer. The home itself is filled with gifts from friends — including many feline-themed paintings and sculptures, in homage to a now-deceased cat — and five (or thereabouts: “It’s a clown car,” Derian deadpans) guest rooms, allowing for plenty of company. A small studio next to his light-filled bedroom houses further stores of novelties, including a series of unsettling German masks from the 1920s; his bedroom contains a striking pair of 50-pound concrete boots. Everywhere, there are hints of the natural world — a dried hornet’s nest in an upstairs sitting room, a sawfish sword hanging nonchalantly in the bathroom, signaling at his love of the outdoors. It’s a space well-suited, to say the least, for exploration.