Home » Entertainment » Arthur Kopit, Whose ‘Oh Dad’ Shook Up the Theater, Dies at 83

Arthur Kopit, the avant-garde playwright who thrust Off Broadway into a new era with the absurdist satirical farce “Oh Dad, Poor Dad, Mamma’s Hung You in the Closet and I’m Feelin’ So Sad” and earned Tony Award nominations for two wildly different plays, “Indians” and “Wings,” and the musical “Nine,” died on Friday at his home in Manhattan. He was 83.

His death was announced by a spokesman, Rick Miramontez, who did not specify the cause.

In 1962, when “Oh Dad, Poor Dad” opened at the 300-seat Phoenix Theater on East 74th Street, American popular culture was shifting. Julie Andrews was between the idealistic “Camelot” and the wholesome “Mary Poppins”; Lenny Bruce, the hot comic of the moment, was known for what came to be called “sick humor.” Broadway was dominated by “How to Succeed in Business Without Really Trying” and “A Man for All Seasons.”

Along came a 24-year-old playwright with a script about an older woman who liked traveling with her virginal adult son and her husband’s preserved corpse. The New York Times critic, Howard Taubman, had reservations — he called it “funny” and “stageworthy” but “nonsensical” — but it won the Drama Desk Award (then the Vernon Rice Award) and even transferred to Broadway for a few months in 1963.

There was often vehement disagreement about Mr. Kopit’s work. Before “Indians” (1969) — a dreamlike production that positioned Buffalo Bill Cody as the first guilty white American liberal and prominently featured his 19th-century Wild West show — arrived on Broadway, there was a production in London, where critical reaction was decidedly mixed. The script included the rape of one Native American and the casual murder (for sport) of another.

Clive Barnes, writing in The Times, called the Broadway production, starring Stacy Keach, “a gentle triumph” and praised Mr. Kopit for “trying to do something virtually no one has done before: the multilinear epic.” But Walter Kerr, his Times colleague, compared it to “bad burlesque.”

John Lahr, writing in The Village Voice, summarized “Indians” as “never less than scintillating” and called it the “most probing and the most totally theatrical Broadway play of this decade.” “Indians” received three Tony nominations, including for best play.

Mr. Kopit professed a very specific social conscience. “I’m not concerned in the play with the terrible plight of the Indians now — they were finished from the moment the first white man arrived,” he told a London newspaper in 1968. “What I want to show is a series of confrontations between two alien systems.” Many saw parallels to the Vietnam War, then at its peak.

When Mr. Kopit returned to Broadway a decade later, his subject could not have been more different. “Wings,” which opened at the Public Theater in 1978 and moved to Broadway the next year, followed the journey of a 70-year-old woman (played by Constance Cummings) having a stroke and reacting to it with fear, determination and kaleidoscopic verbal confusion. As The Washington Post reported, when the main character is asked to repeat the sentence “We live across the street from the school,” she replies, “Malacats on the forturay are the kesterfacts of the romancers.”

Richard Eder of The Times called “Wings,” which had been inspired by the post-stroke rehabilitation experiences of Mr. Kopit’s stepfather, “a brilliant work” — “complex at first glance,” he wrote, “yet utterly lucid, written with great sensitivity and with the excitement of a voyage of discovery.”

The play was nominated for three Tonys. Ms. Cummings won the Tony and Drama Desk awards for best actress and an Obie for her performance.

Mr. Kopit discovered his gift for writing plays almost by accident. In a 2007 interview with The Harvard Gazette, the official news outlet of his alma mater, he looked back at his initial reaction when he switched from short stories to scripts.

“I was having a lot of trouble with the narrative point of view,” he recalled. “When I wrote a play, I found that I lost myself as Arthur Kopit and I just wrote down what the characters said. I wasn’t anywhere in the play, and I liked that.”

Arthur Lee Koenig was born on May 10, 1937, in Manhattan, the son of Henry Koenig, an advertising salesman, and Maxine (Dubin) Koenig. His parents divorced when he was 2, and his mother’s occupation was listed in the 1940 census as millinery model. He took on his stepfather’s name after his mother married George Kopit, a jewelry sales executive.

Arthur grew up and attended high school in Lawrence, an affluent Long Island community. He was already writing by the time he left Harvard in 1959 with an engineering degree. As he began a graduate fellowship in Europe, he heard about a Harvard playwriting contest. He wrote, entered and won the $250 prize with “Oh Dad,” which he said he never believed had any commercial potential.

Mr. Kopit was at first fond of wordy, rambling titles. “Oh Dad, Poor Dad, Mamma’s Hung You in the Closet and I’m Feelin’ So Sad” even had a subtitle: “A Pseudo-Classical Tragifarce in a Bastard French Tradition.” He followed that success with a collection of one-acts, including “The Day the Whores Came Out to Play Tennis,” set at a suburban country club. “On the Runway of Life, You Never Know What’s Coming Off Next” was another early work.

His last Tony nomination was for the book of the musical “Nine” (1982), based on Federico Fellini’s film “8½.” That same year, he adapted the book of Ibsen’s “Ghosts” for a Broadway revival. 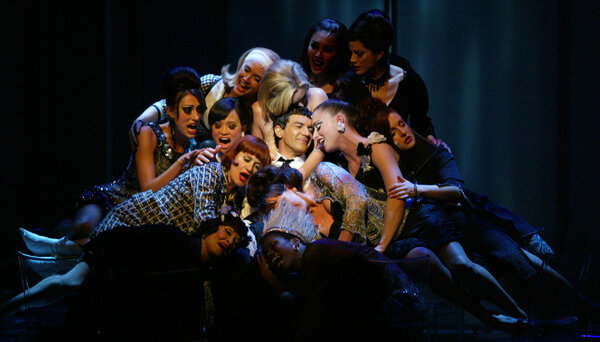 Mr. Kopit was a full-fledged celebrity writer, so his later plays received considerable publicity, but they were not successful. “End of the World,” about a playwright struggling with a script concerning the nuclear arms race, ran for less than a month in 1984, despite a relatively starry cast and Harold Prince’s direction.

Bad timing complicated some later efforts. He and the composer and lyricist Maury Yeston, with whom he had collaborated on “Nine,” began work in 1983 on an operetta-style adaptation of “The Phantom of the Opera.” But before it was finished, Andrew Lloyd Webber’s version was a hit in London and had opened on Broadway at the Majestic Theater — where it celebrated its 32nd anniversary shortly before the pandemic shut Broadway down.

Investors pulled out of “Phantom,” as the Kopit-Yeston version became known, but it was turned into a television mini-series in 1990, had its stage premiere in Houston in 1991 and went on to more than a thousand productions worldwide. Mr. Yeston once called it “the greatest hit never to be produced on Broadway.”

In a statement on Saturday, Mr. Yeston called Mr. Kopit “one of the most uncompromisingly original writers that America ever produced.”

Mr. Kopit’s “Y2K” (1999) was about an affluent New York couple whose identities are stolen by a young hacker. The title, a term used in countless news headlines, referred to the widespread fear that the beginning of the year 2000 would confuse computer calendars to the extent that planes would fall out of the sky. When that didn’t happen, Mr. Kopit renamed the play “Because He Can.” In between, Peter Marks’s Times review pronounced the Off Broadway staging “grim and tedious.”

Over the years, Mr. Kopit taught writing at Yale, Wesleyan and the City College of New York.

His final Broadway credit was the book for a 1998 stage version of the Cole Porter film musical “High Society,” based on “The Philadelphia Story.”

Mr. Kopit married Leslie Garis, a third-generation writer, in 1968. She survives him as do two sons, Alex and Ben; a daughter, Kat Kopit; three grandchildren; and a sister, Susan Mann.

Mr. Kopit seemed to take pride in being abstruse. After presenting a new work at a 1970s playwrights’ conference in Connecticut, he was told some points were confusing. He replied, “If you fully understood it, I would have failed.”

Art Is Everywhere. Just Look to the Streets.