Home » Billie Zangewa Makes Art Where the Light is Best

This article is part of our latest Design special report, which is about expanding the possibilities of your home.

Rootless is how Billie Zangewa recalls much of her childhood, growing up in Malawi, Zimbabwe and Botswana in the 1970s and ’80s. Her father was an engineer who helped build electrical power systems across southern Africa, and her family moved around a lot.

“I went to, like, seven primary schools,” said the artist, now based in South Africa. “And I lived in houses where the personal touch just wasn’t there. Home didn’t really exist for me. It was more like a memory, a fantasy.”

Now, home is at the center of Ms. Zangewa’s art: tapestries of silk fabrics hand-stitched into collages that depict intimate moments from her life as a Black female artist and a single mother, sometimes — not least during Covid lockdowns — juggling the two.

“It’s my everyday experiences, challenges, personal growth, my journey,” she said of her tapestries, which have attracted a growing international following. This fall, she will have her first solo museum exhibition, at the Museum of the African Diaspora in San Francisco, as well as simultaneous shows of new work at the London and Seoul branches of the Lehmann Maupin gallery.

Even before the pandemic, Ms. Zangewa, 48, was making her tapestries at home, in the 1950s colonial house she shares with her 8-year-old son, Mika, in Johannesburg’s Parkhurst suburb. Though it has a contemporary eat-in kitchen that was added later, the residence retains original details like tin ceilings and floors laid with planks of Douglas fir.

“That was mandatory for me,” she said, “because it just brings back really beautiful memories of when I was a little girl in Zomba, where for a couple of years we had this lovely house with wooden floors, pressed ceilings and bay windows.”

Her work space is the seven-foot-long kitchen table, made in India with a reclaimed wood top and vintage turned legs, surrounded by secondhand Xavier Pauchard metal cafe chairs. (“New furniture just doesn’t excite me,” she said.) At times over the past year, when her son’s school shifted to remote classes, the two of them worked at the table side by side. 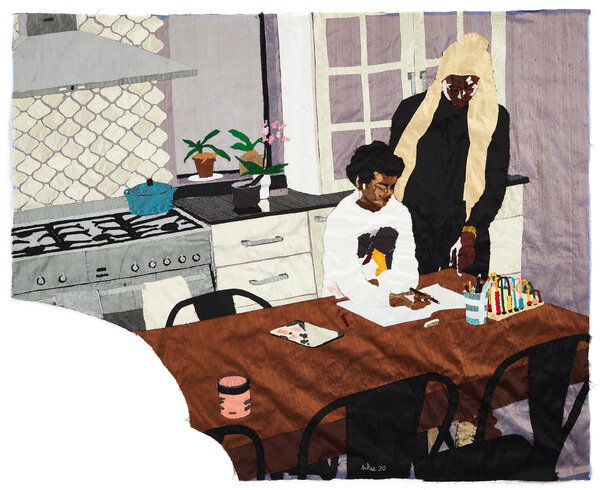 It’s a scene Ms. Zangewa memorably captured in a work titled “Heart of the Home.” Measuring four and a half feet across, it’s fairly typical in size for her tapestries, and it depicts the artist standing behind her son as he writes in a notebook, his abacus, pencils and eraser in front of him, and a tablet computer — that ubiquitous feature of distance learning — close at hand.

She points to something on the page, stepping into the role of teacher. But she is also the mother who has dinner in a pot on the stove and has taken time to brighten the countertop with flowers, while her own work at the other end of the table is left out, seemingly obscured by an irregularly shaped void. A jar of her body butter rests on the table, awaiting precious time for self-care.

“This is very much a post-Covid image of life, where domestic space has taken on so many different functions,” said Ms. Zangewa. “And it was kind of a scary situation, especially for my son, because his familiar learning space was gone. Now, suddenly, there’s Mom being my teacher and then everyone is having all of these thoughts about dying from Covid. Will we ever see people again? So it’s a very emotionally loaded piece.”

Ms. Zangewa acknowledged that the proximity was “absolute hell” at times (as most parents can relate to), with “blowups and tears.” But she loved being able to “take a break and have a quick chess match or go sit on the patio and have a little midday snack together.” The rough patches, she said, were all part of the bonding.

As much as “Heart of the Home” is a personal snapshot of a moment between a mother and son, it is also a scene played out over and over in kitchens across the globe. The very ordinariness and universality of it, meticulously captured in handmade detail, give the work a humanity that defines Ms. Zangewa’s art.

Earlier in her career, she made tapestries with nature scenes or cityscapes and episodes from her life around Johannesburg. It was really after the birth of Mika that her focus increasingly shifted to domestic subjects — not just images of family life but also quiet moments of reflection and solitary pleasures such as reading a book on a sofa, sipping a cup of tea at the end of a long day, or taking a shower to refresh and recenter psychically.

Ms. Zangewa said she likes to think of these seemingly mundane acts — along with so many underappreciated things women do in the home — as a kind of daily feminism practiced, in her case, by a single mother who may present as strong but is also “very delicate and fragile.” Embracing her identity and choices, putting her own vulnerability and pain on display, adds to the poignancy of her domestic scenes.

The tapestry “An Angel at My Bedside” shows the artist asleep, a framed photograph of her son next to her on the night stand. “It was a very, very sad moment,” she said, explaining that a dear friend, Henri Vergon, founder of the Johannesburg gallery Afronova, had recently died and she had been unable to visit him because of Covid.

“Strange things can happen when you’ve just lost somebody,” she said. “You fall asleep and dream about them and they give you a message.”

She has documented lighter moments lately, too, including her son, in his pajamas, curled up on a vividly striped pouf, “just like a little puppy” as she described it, in “Return to Innocence.” Or the artist, wearing a bikini, surrounded by flowers in her sunny garden, “dreaming of being by the sea,” she said, in “A Vivid Imagination.”

While she may be suffering from pandemic-induced wanderlust, Ms. Zangewa said, “There’s no place I’d rather be than at home.” And her hope is for her son to have a more settled childhood than her own.

“I lament the fact that I can’t go back to an old family home,” she said. “My son’s father actually lives in his mother’s house. So on the weekends, my son goes to his grandmother’s house. I want that kind of rooted narrative for my boy.”

As she and Mika have begun to return to more normal routines, Ms. Zangewa has fully reclaimed the kitchen table as her own. There is a space at the back of the house that she had envisioned using as a studio but still hasn’t gotten around to doing the renovations.

“If I’m honest, I think I haven’t dealt with it because I don’t really want to work in there,” she said. “I love my kitchen. Now it’s autumn in South Africa and the light that comes through the windows is just heavenly. I literally feel like I’ve been transported. So unless somebody can bring that to that other work space, I’m not going in there.”