Bowen Yang has made history yet again.

The actor and comedian on Tuesday earned an Emmy Award nomination for Outstanding Supporting Actor in a Comedy Series for his work on “Saturday Night Live.”

In doing so, Yang reportedly becomes the first Chinese American man to be nominated in an acting category. If he wins, he’ll become the third Asian actor to win in an acting category in general, following Riz Ahmed in 2017 for “The Night Of” and Archie Panjabi in 2010 for “The Good Wife.”

Aziz Ansari, who is Indian American, was nominated for Lead Actor in Comedy Series in 2016 and 2017 for “Master of None.” Though he won Emmys in both years for Outstanding Writing, he did not receive awards for acting.

Yang, who also co-hosts the “Las Culturistas” podcast, had a breakout season on “SNL.” In March, he won praise for speaking out against Asian American hate as part of a “Weekend Update” segment. The following month, he went viral for his performance as the iceberg that sank the Titanic. 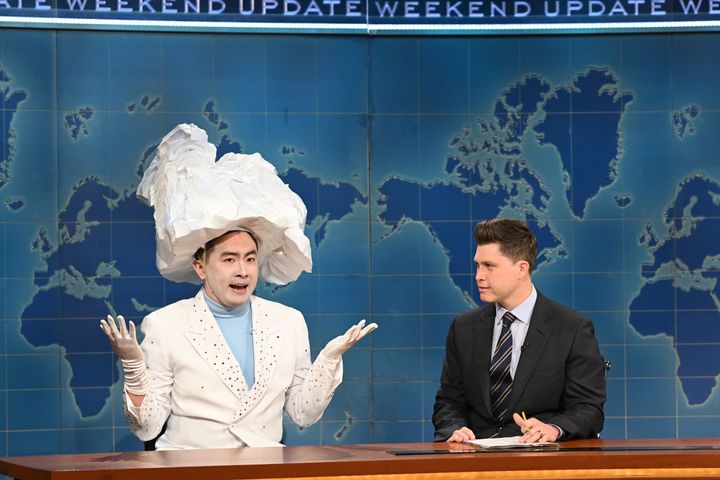 In 2019, Yang was promoted to a full-time “SNL” cast member a year after joining the show’s writing staff. His position made him the show’s first-ever Chinese American cast member, and third Asian cast member after Rob Schneider, who’s of Filipino descent, and Fred Armisen, who is part Korean. Yang also is the third gay male cast member, after Terry Sweeney and John Milhiser.

In a May interview with Joel Kim Booster, Yang spoke at length about how his Asian heritage and gay identity shaped his personal and professional life.

“It might be fair to say that at first consideration, it feels like they’re identities that are somewhat at odds with each other,” he said, according to People. “Holding those two identities of being gay and Asian have, I guess, made my skin a little thicker.”

Last month, it was announced that Yang had signed on to star opposite Booster in “Fire Island,” a queer-inclusive reimagining of Jane Austen’s “Pride and Prejudice.” The movie will be directed by Andrew Ahn and will stream on Hulu, though no release date has been set.