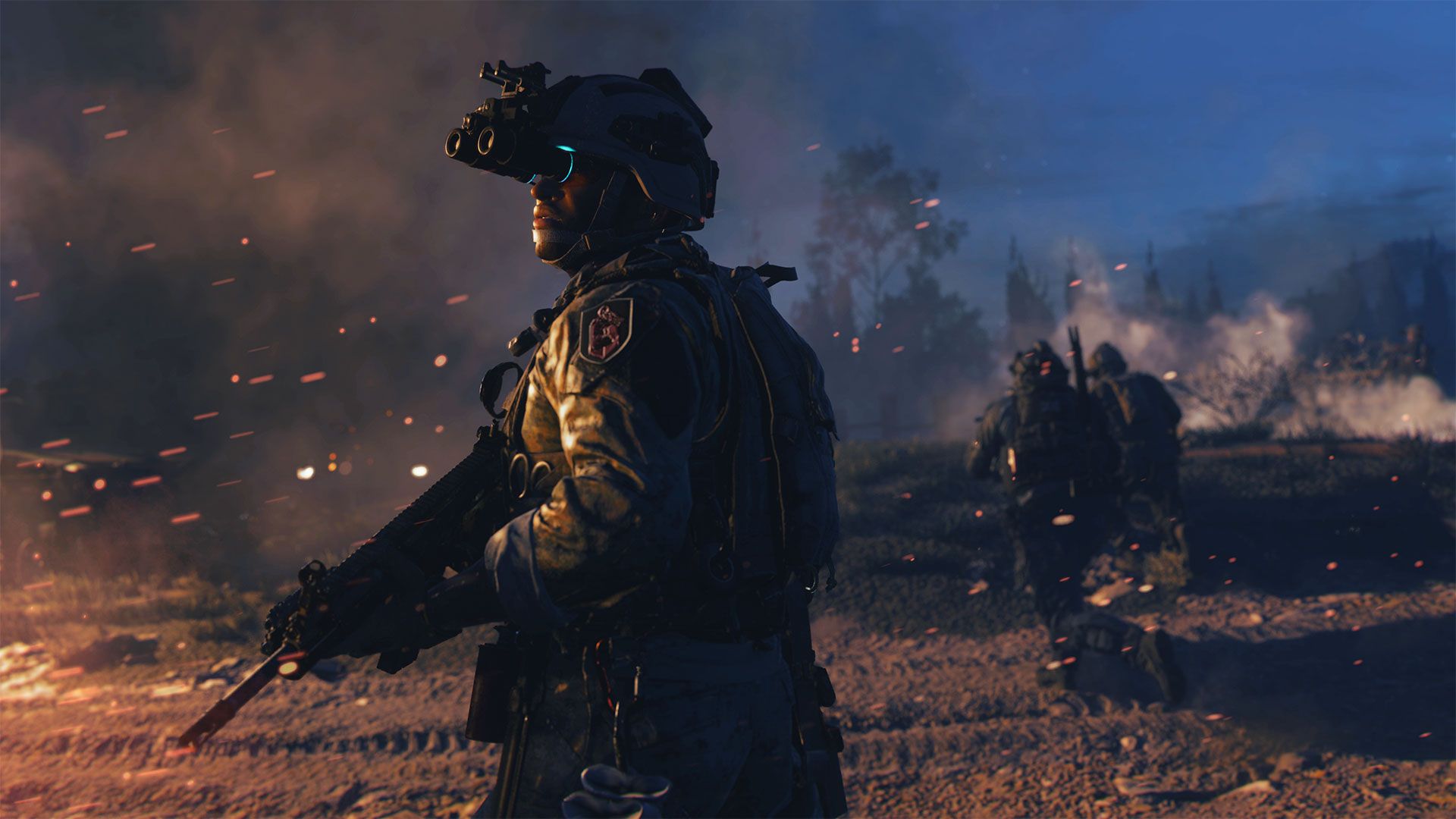 The latest Call Of Duty is both a sequel and a reboot but with no real competition this year is it sitting on its laurels or taking advantage of an open goal?

When a long-running series hits a speed bump, two obvious options present themselves: press forward with a reboot that tries to reinvigorate an ailing franchise, as God Of War and Zelda: Breath Of The Wild did, or retreat backwards to something more tried and tested. The latter is sometimes the best decision, if a series has strayed too far from its roots, but when the original problem is merely overfamiliarity it rarely works out for the best.

As you might imagine, the reason we’re bringing this up is because Modern Warfare 2 has gone for option number two. Last year’s Call Of Duty: Vanguard was one of 2021’s most successful games but it was also a commerical disappointment that promoted a narrative that Call Of Duty as a whole was starting to become old hat. (Its relative failure is the reason Activision Blizzard became cheap enough for Microsoft to try and purchase.)

Viewed on its own merits, Vanguard was not a bad game – no Call Of Duty ever has been – but half the problem was that its Second World War setting just didn’t resonate anymore, especially as Warzone was forced to replicate it. That seemed to make the wait until the next game longer than usual, but here it is: the series’ second Modern Warfare 2 and another Call Of Duty game that is exactly what you expect and not an smidgen more.

This isn’t a final review because the multiplayer servers only switched on the night of the launch and our experience with the PvP mode comes from the beta. Plus, we haven’t played the co-op Special Ops mode at all (there is no Zombies mode), so that will have to wait until later.

If you’re a committed Call Of Duty fan then you’ve probably already played the single-player campaign, since if you pre-ordered the game you were able to access it a week early. That’s not something Activision has done before and it’s not entirely obvious why they did. It does illustrate how good the graphics are – easily the best the series has ever seen – and showcases the new modern armoury, but in terms of storytelling and mission design it’s harder to be impressed.

Technically, this is a sequel to 2019’s reboot of the Modern Warfare series, but while that game was only a very loose interpretation of the 2007 original, for some reason the Modern Warfare 2 reboot is a lot closer to its 2009 inspiration (whose campaign was remastered only a couple of years ago). It’s not exactly the same, as much of the game is set in Mexico, but the broad strokes of the plot, and many of the set pieces, are very familiar.

This is a disappointment on two fronts, not just in the sense of the unoriginality of it all but the fact that the first Modern Warfare reboot had notably more serious storytelling than any of the other games, and actually allowed some nuance in the portrayal of its characters and the amorality of war. However, the new Modern Warfare 2 is straight back to Michael Bay style bombast and nonsense, and we’re not sure why.

Oddly, the new Modern Warfare 2 is also obsessed with reimagining missions from the first Modern Warfare, even though its reboot didn’t go in for that sort of fan service. That means levels inspired by not just Crew Expendable and Clean House but the iconic Death From Above and All Ghilled Up. They still work the same way they did in the naughties, as you control a ‘TV operator’ in an overhead gunship, raining death upon hapless foes below, and then later end up sneaking around in a ghillie suit, as bad guys pass by inches from your position.

In the original game these missions were surprisingly brief and like nothing that had ever been seen at the time. In the new Modern Warfare 2 though, they go on for far too long and, since they occur very early in the campaign, create a sinking feeling that bold new ideas are not on the game’s agenda.

Unfortunately, that impression is entirely correct as while the campaign does highlight new features from the multiplayer, such as swimming underwater, it never manages to find a compelling way to do it. Most of the levels take place in small (much smaller than you first think) open world areas and yet the amount of downtime and poor signposting is shocking. You’ll spend far more time wandering around, not sure what to do or where that last enemy is, than you will shooting anyone, especially in the first half of the campaign.

Some of the sequences do look stunning (the Amsterdam level is amazing) but they’re barely any more than interactive cut scenes and probably would’ve been more entertaining as QTEs. Other missions have good ideas, such as the one where you’re unarmed and trying to sneak out of an occupied town while crafting boobytraps, but even that is spoiled by the fact that you’re injured and move at a snail’s pace.

Other new ideas, like armoured enemies, are presumably realistic and yet feel strangely artificial and overly video game-y, with the little icons indicating whether you’ve pierced someone’s armour. Ultimately, the best new mission is probably the one where you’re trying to bluff your way into a drug lord’s mansion, not least because it’s short enough that it doesn’t overstay its welcome.

At little more than six hours, the campaign isn’t a waste of your time, but it’s too obsessed with recreating the past, while missing much of what made the older games so effective. In the end, we suspect the main reason for releasing it early was that Activision knew most people would get bored and give up within half an hour, never to return, if it had launched at the same time as the multiplayer.

The reason there’s never been a truly bad Call Of Duty game is simple: the series’ gunplay (which has always been 60fps, for those who now suddenly consider that important) has always been excellent. Playing soldiers is a primal, human desire and while some entries have been better than others, running around, pretending to shoot people is always irresistible entertainment. Especially when combined with the action and endless array of modes and options in Call Of Duty.

We’re sure there are some fans planning to lecture others about how much better this is than last year’s Vanguard but the truth is that, apart from the change in setting and weapons, the two work very similarly. Modern Warfare 2 has a slightly faster pace to its combat, and the map design and operators are much better, but there are no big new ideas here and this is most certainly not Call Of Duty’s Breath Of The Wild moment.

The map design may be the best element of the new game, as it’s often very clever about how it manipulates the pacing of a match. Call Of Duty has a reputation for just being a free-for-all but on the best of Modern Warfare 2’s maps running around like a kid with a supersoaker will get you absolutely nowhere. A lack of caution is always fatal, with the best advise being to keep moving and always assume someone can see you, as you’re made to work for your killstreaks.

Farm 18 was one of our favourite maps from the beta, with its maze of buildings, as well as Mercado Las Almas and it’s tempting hub area that it funnels unwary players towards. Good map design can make even familiar modes seem fresh, which is just as well as new additions like Knock Out and Prisoner Rescue are just minor variations of modes you will have experienced a thousand times before. Even the third person moshpit isn’t technically new (Modern Warfare 3 also had a third person mode) and is really only Team Deathmatch with a different camera.

New or old, the standard game modes are exactly that, but the closest Modern Warfare 2 comes to innovation is in its larger maps, which allow for 64 players at a time. This opens up additional modes like Invasion and Ground War, which are the most fun we’ve had with the multiplayer so far. Invasion is brand new and is essentially Team Deathmatch with computer-controlled bots added on top, but it works great with the new and expansive maps.

Ground War has been in Call Of Duty before but it’s never worked quite this well. It’s still an objective based team game but the map design is, again, excellent and the vehicles are the best they’ve ever been in a Call Of Duty game. Considering the mode is essentially identical to Battlefield’s Domination, it’s only going to drive the nails into Battlefield 2042’s coffin even harder.

It really doesn’t matter that the campaign is so mediocre. Most recent ones have been and it’s only the fact that the first Modern Warfare reboot broke the mould that makes this a disappointment. There are improvements, and a few detractions, here but there’re not nearly enough mistakes to ruin the game’s appeal. You know what to expect with Call Of Duty and with Modern Warfare 2 you get exactly that, and no more.

In Short: A mild disappointment compared to the first Modern Warfare reboot, that relies too much on nostalgia and old ideas, but the core action and multiplayer modes are as irresistible as ever.

Pros: Fantastic gunplay and highly impressive graphics. A mountain of modes and options, and the map design and vehicles in multiplayer are top notch. Tons of content, including co-op Special Ops.

Cons: The campaign fumbles its few innovations and doesn’t seem to understand why the originals worked so well. Multiplayer is fundamentally the same as always.