Home » Can’s Live Shows Will Be Heard at Last, Thanks to a Bootlegger in Big Pants

In February 1972, following the surprise success of the single “Spoon,” the experimental rock group Can staged a massive free concert in its Cologne, West Germany, hometown. To better entertain the crowd, it punctuated the music with a slapdash circus, including a juggler, a singing saw player and a team of acrobats.

The band planned to document the event with a live recording, as well as a concert film directed by Peter Przygodda, who became Wim Wenders’s editor. The film footage turned out fine — shot in part by the renowned cinematographer Robby Müller — but there was a glitch with the audio. “Something went wrong and the equipment didn’t record,” Irmin Schmidt, one of the group’s founders, recalled ruefully in a phone interview last month. Schmidt’s keyboards and Michael Karoli’s guitar were inaudible. The film was rescued with overdubs, but the live album was scuttled.

The incident was one of several mishaps that prevented Can from issuing a proper concert album during its 1968 to 1978 existence or since, despite numerous releases on its own Spoon label mining its voluminous archives. (A few odds-and-ends live recordings have arrived over the years.) But later this month, Mute Records will release “Live in Stuttgart 1975,” the first in a series of restored and remastered live albums made possible by Andrew Hall, a British fan who beginning in 1973 followed the group around with a Sony cassette recorder hidden in his pants. 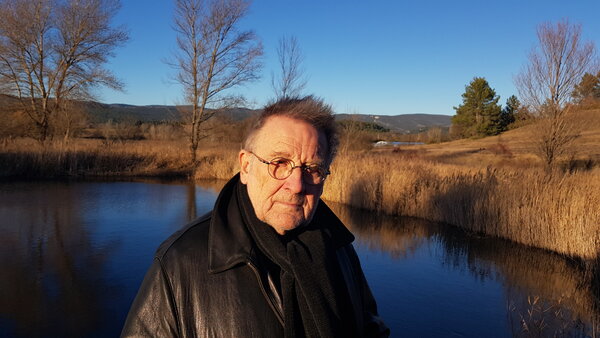 Hall’s job as a developmental chemist allowed him to travel, and he organized his schedule to coincide with Can gigs in the United Kingdom and northern Europe. “I think the number of live shows I attended was 44,” Hall said in an email. “I recorded every one.”

Hall, who had a 28-inch waist size, wore 36-inch trousers to fit the recorder and threaded microphones down each of his sleeves. He donned a heavy overcoat to camouflage the illicit ensemble. “If the temperature was turned up,” he writes in the album’s liner notes, “I just about melted.”

Whenever Hall couldn’t make a gig, he’d ask other fans to send their own cassettes. His bootleg archive ultimately reached several hundred recordings, “most of them in quite a bad technical state,” said Schmidt. “I refused all the time to go through it, but Hildegard is very insistent, and finally she convinced me,” he added, referring to his wife, who has managed the band’s affairs since 1971.

The album is the first recording issued under the Can banner since the deaths of the bassist Holger Czukay and the drummer Jaki Liebezeit in 2017. (Karoli died in 2001; the band’s primary vocalist, Damo Suzuki, whom Czukay and Liebezeit recruited when they heard him busking in Munich, remains a globe-trotting troubadour.) For most of the last 40 years, Schmidt, 83, has lived in the south of France with Hildegard.

Though they recorded their first several albums in a 14th-century castle, Can uniquely anticipated 21st-century music making. Blending the heady experimentation of Schmidt and Czukay, both former students of Karlheinz Stockhausen — including the use of noise, sampling and minimalist repetition — with the body-moving hypnotic groove generated by the jazz-trained Liebezeit’s drums, Can created a free-flowing improvisatory psychedelia that put the “trance” in “transcendent.”

The group inspired multiple generations of post-punk and alternative bands and electronic musicians, and found its way to hip-hop (see Kanye West’s “Drunk and Hot Girls,” among other songs). It also made the opening boast of LCD Soundsystem’s debut single “Losing My Edge,” where James Murphy announced, “I was there in 1968/I was there at the first Can show in Cologne.”

In everything Can, Schmidt said, spontaneity was crucial. “When we went onstage, we didn’t even know beforehand what we would play. We just reacted to the atmosphere, to the acoustics, to the public, to the whole environment spontaneously, and started playing something, which we had never played before,” he said. “We didn’t talk to each other onstage at all. Everything we had to say to each other, we did with our instruments.”

Despite taping its marathon daily studio sessions, the group neglected to make any board recordings from their live concerts. “We should have,” Schmidt lamented, “but we didn’t and that’s a pity.”

The Stuttgart gig derives from a tour around the release of “Landed,” Can’s sixth studio LP and its second without a vocalist, Suzuki having departed in 1973. The four musicians connect in a freewheeling pyroclastic flow not dissimilar from the futuristic fusion of Miles Davis’s electric bands of that period. Karoli’s guitar weaves between inner and outer space until several of the untitled, totally instrumental pieces culminate in freaked-out sonic squalls, outbursts the band called “Godzillas.”

The Mute Records founder Daniel Miller saw the band in London on that same tour. “I just wanted it to go on forever,” he said. “I couldn’t believe how they worked together as a band, how they fed off each other in the improvisational sense. It was beyond anything I’d seen before.”

Schmidt feels that the Stuttgart gig is a good example of Can’s stage interplay. On the second track, Czukay begins the bass line from “Bel Air” but the melody ultimately drifts away when nobody joins in. “If we played something which reminded or was near to a song, somebody just came up with it all of a sudden,” Schmidt said. “It was sometimes sort of like a game. You threw something towards the other, and he picked it up, or he didn’t use it and threw it to somebody else. When it worked it was very beautiful and inspiring, even very amusing, using parts of what you have already done, but giving it a totally new direction.”

The band’s concerts were usually three hours long, comprising two 90-minute sets. For the live series, Schmidt plans to largely avoid single songs from different nights in favor of entire gigs, “which shows how we structured the set, how the flow was going, the feeling of a real concert,” he said.

Can’s improvisatory ethic did not always guarantee consistent results. “You can’t play like this onstage, giving yourself totally up to the atmosphere and to the moment spontaneously, without sometimes risking failure,” Schmidt explained. “There were of course also concerts which were horrible, really bad, because we played without any net.”

But even in the worst-case scenarios, there was still potential for magic. “Quite often, when the first set went terribly, people didn’t leave and the second set became really wonderful,” he said. “So the public sort of took part in our efforts to create. It was really like, if it didn’t work, they suffered like us, with us, and if it worked they enjoyed it like us.”

The next release will be from the Brighton, England, stop on the same 1975 tour, Schmidt said, but he hopes to feature earlier performances, including potentially a recently discovered 1970 German TV performance.

“When I more or less founded this group, I wanted to bring together totally different musical experiences and styles,” Schmidt said. “I wanted musicians who were professionally at home in different contemporary musics like jazz, rock, electronics, and neo-classical music. To bring it together was not easy and created a lot of tension, but that made the music so interesting because when it succeeded, the tension made sense, and created beauty.”