Carrie Underwood became the subject of much ire this week when she liked a video tweeted by conservative commentator Matt Walsh where he characterizes students donning face masks as “wearing muzzles like rabid dogs.”

The country singer appeared to like an Aug. 12 tweet from Walsh, which showed him speaking at a Metro Nashville Board of Education meeting to criticize a mandate requiring students to wear masks in order to slow the spread of COVID-19. In the video, Walsh lambasts the masks as both “child abuse” and “Munchausen by proxy.”

“If you think I’m exaggerating, then how would you respond to a parent who forced his kid to wear a football helmet every day, all day, for fear of falling coconuts and meteors?” Walsh said. “Your kid is almost as likely to die of COVID as he is from a rock from the sky, and yet if you saw that, you would say to that parent that he is abusive, that he is forcing his kid to participate in this utterly insane charade in order to satisfy his delusional psychotic hypochondria.” 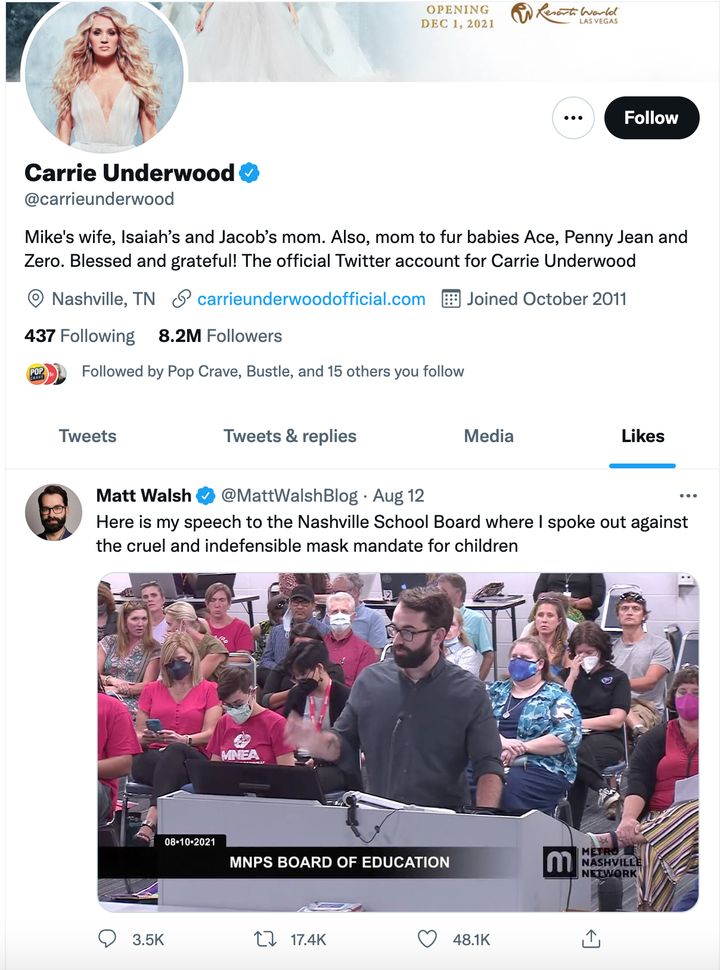 In the United States, cases of COVID-19 among children have steadily increased since the beginning of July, as per a report from the American Academy of Pediatrics, and experts say that “the situation is growing particularly dangerous for children” due to the more transmissible delta variant of the virus.

While cases of COVID-19 have also been steadily rising in Tennessee specifically, where Walsh spoke out against mask mandates, Republican Gov. Bill Lee signed an executive order on Monday allowing parents or guardians to opt children out of school mask mandates.

As of Wednesday morning, the tweet appeared under Underwood’s likes. HuffPost has contacted Underwood for further comment on her stance on masks.

In response to discovering her support on anti-mask efforts, many fans of the artist have shared their thoughts on the matter:

Free Your Mind With Dumbgood's 'The Matrix' Capsule Collection

Local choir a ray of light for singers in dark days