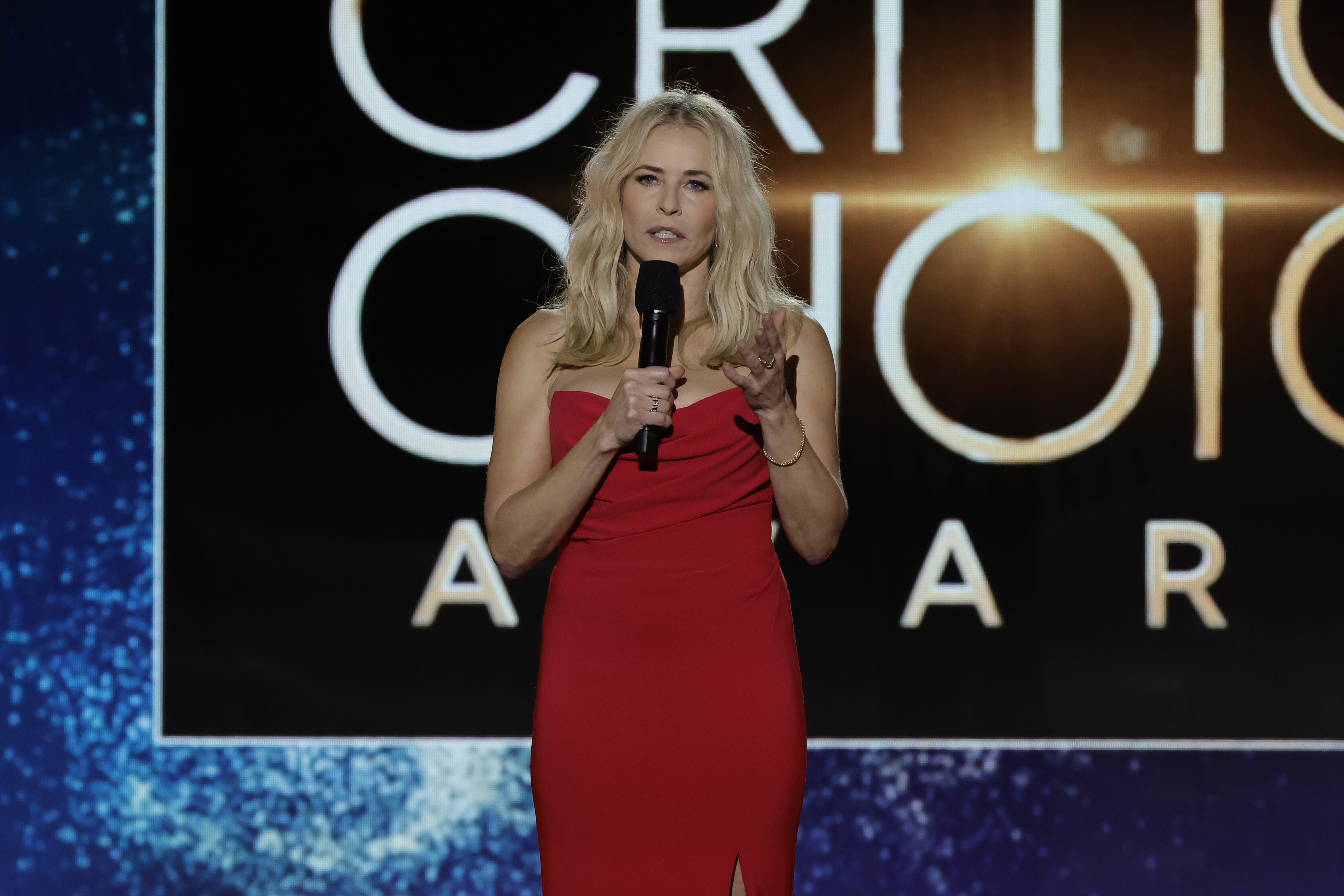 Chelsea Handler didn’t shy away from taking a shot at Prince Harry and James Corden in her blistering opening monologue at the Critics’ Choice Awards on Sunday.

The 47-year-old comedian made a jab at the Duke of Sussex, 38, following the release of his rather controversial memoir Spare, in which he opened up about how a trip to the North Pole led to his penis becoming frostbitten.

Addressing audiences at the ceremony, hosted at the Fairmont Century Plaza in Los Angeles, Handler was clearly sick of hearing about the Prince’s icy shlong.

‘Before we get started, I just want everyone to know that we are here to have fun and keep the vibes high,’ she began.

Then taking aim at the royal, she jibed: ‘Dahmer became the third highest viewed show on Netflix with a combined watch time of one billion hours, which apparently is the same amount of time we’re going to have to listen to Prince Harry talk about his frostbitten penis. It’s enough already.’

But Prince Harry wasn’t the only person in Handler’s firing line as she also took a swipe at Corden, 44.

Of course, Corden was caught up in a restaurant scandal last year when the owner of Balthazar restaurant in New York called him out for alleged bad behaviour.

The actor later addressed the incident during an episode of his talk show The Late Late Show where he said it was ‘never my intention’ to upset staff at the establishment, but acknowledged he had been ‘ungracious’ during the incident.

Referencing the controversy, Handler told the Critics Choice’ Awards crowd: ‘And look, the cast of The Bear is here.

‘Awesome show. They showed us how gruelling and hellish and absolutely miserable working in the restaurant industry can be, and they didn’t even have to wait on James Corden.’

‘Between covid, monkeypox, the Don’t Worry Darling press tour, it’s been a lot. I’m just happy to be here tonight supporting the critics’ right to choose. At least someone still has a choice, unless they’re a female critic, then it depends on what state they live in.’

‘This show is an opportunity for critics to celebrate some of the world’s most talented storytellers and performers. “The Woman King” was a huge hit at the box office. Oh, yeah! Viola, I cannot get enough of you. You were so bada** in this movie after it ended, I wanted you to kick my a**.’

‘As part of Viola’s training for the film, she was given a DNA test to determine the best workout regimen for her genetic make-up, which also revealed that she’s Nick Cannon’s daughter.’

‘Julia Roberts is here tonight! Yeah, she’s nominated for playing Martha Mitchell in “Gaslit.” Yes. We love you, Julia. The word “Gaslighting” was actually Merriam-Webster’s word of the year. And for those of you who don’t know, gaslighting is when someone tries to convince you that your own perceptions of reality are wrong. Like when celebrities say they lost weight by drinking water, but really it’s because everyone’s on Ozempic. Even my housekeeper’s on Ozempic.’

‘Cate Blanchett is here tonight. Cate, as far as I’m concerned, you should win an Oscar every year just for being alive. In Tar, Cate portrayed an “Iconic lesbian” after playing a conductor whose professional career is upended by her toxic behavior. And she didn’t even have to host her own daytime talk show.’

‘It was a breakout year for queer cinema, with movies like “Bros,” “Fire island,” “Top gun: Maverick.” Of course one of the biggest movies this year was “Avatar: The Way of Water.” I don’t want to say that studios treat male and female directors differently, but James Cameron was given a budget of $350 million and Sarah Polley had to film “Women Talking” in a barn. But, I guess it all worked out because they’re both up for best picture. “Women Talking” is a powerful movie, but a warning to men: Women will definitely be talking.’

‘Niecy Nash-Betts is nominated for “Dahmer.” “Dahmer” became the third highest-viewed show on Netflix with a combined watch time of 1 billion hours, which apparently is the same amount of time we’re going to have to listen to prince Harry talk about his frostbitten penis. It’s enough, already.’

‘One of my favorite shows, “Bad sisters,” is nominated. It’s about four sisters plotting to kill their brother-in-law. Which is something I’ve fantasized about doing for years but could never get any of my siblings on board. Shout out to my family. And look, the cast of “The Bear” is here. Awesome show. They showed us how grueling and hellish and absolutely miserable working in the restaurant industry can be, and they didn’t even have to wait on James Corden.’

‘Of course, everybody’s talking about “White Lotus.” Who knew Italian sex workers would have such a big year? Well, I guess all of you did.’

‘Kaley Cuoco is nominated for “The Flight Attendant.” Special shout out to flight attendants everywhere. Because of what they’ve had to put up with for the past three years. Just a bunch of innocent women and gay men who wanted to spend a couple of extra weekends a year in Puerto Vallarta, then had to spend their shifts duct-taping right-wing whack-jobs to their seats.’

‘Michelle Pfeiffer is nominated for “The First Lady,” where she played Betty Ford. She was incredible. She couldn’t be here tonight. So instead, I look forward to playing Betty Ford at the after party.’

‘There’s been some solid Jewish fare for this award season, we had the Fabelmans, and the Fleishmans, and that giant bagel in “Everything everywhere all at once.” We’ve all heard a lot of nonsense recently about Jews running Hollywood. And I would like to say, as a Jewish woman, so what if they do? Who cares? The French run bakeries, Italians run the mafia, and Swedish people run IKEA. Okay? Stay in your lane.’

‘Anyhoo, it’s an honor to be here tonight to help all of you celebrate the brilliant results of your hard work, your talent, and your dedication. This past year, you’ve entertained us, you’ve moved us, enlightened us, and for the first time, congress is more dysfunctional than Hollywood.’

‘It even has more sex offenders. So we’ve already won! Let’s get this show started.’