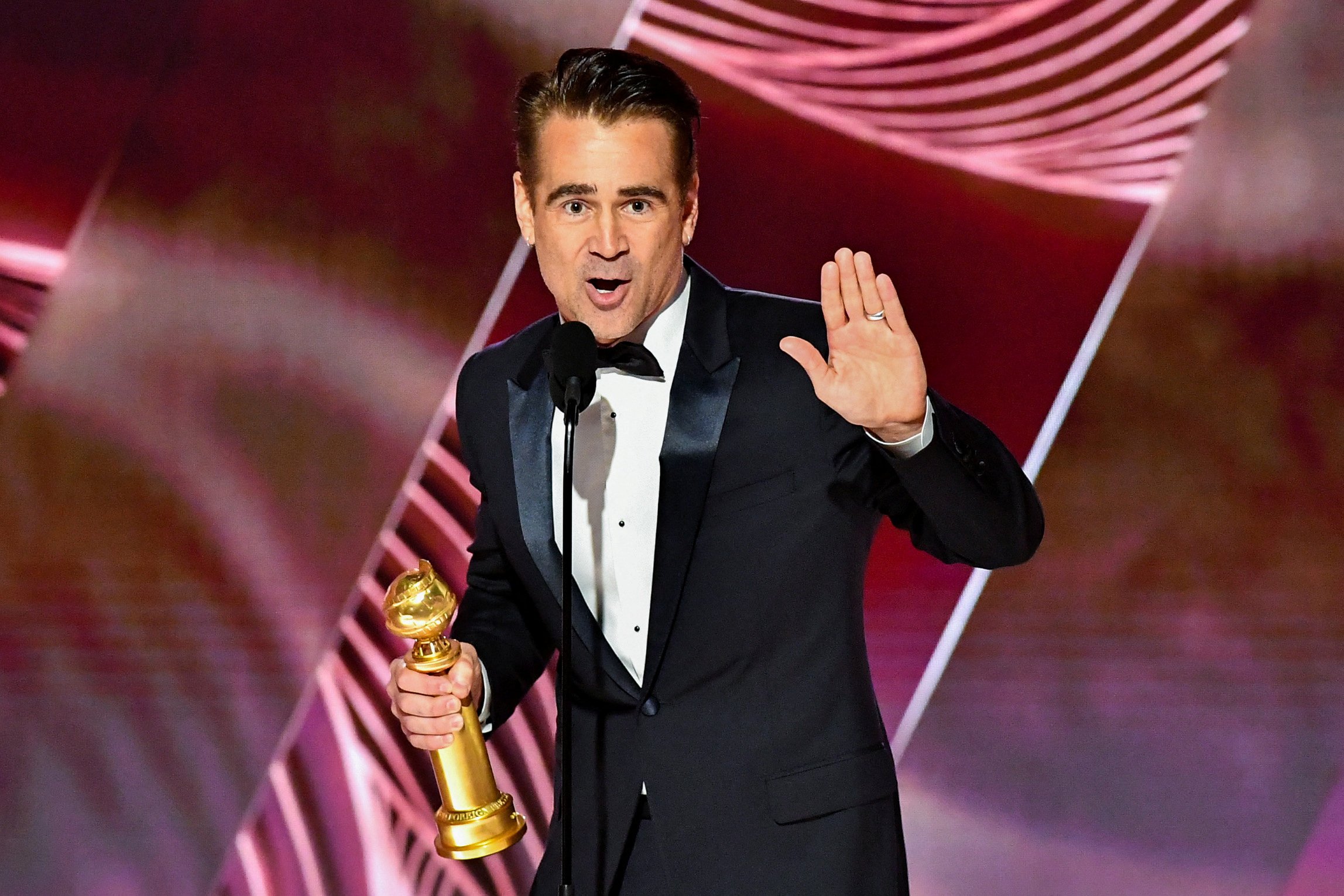 Colin Farrell is ‘beyond honored’ after landing his first ever Oscar nomination, thanks to his incredible stint in Banshees of Inisherin.

The 46-year-old stars as Pádraic Súilleabháin in the critically acclaimed flick, beside Brendan Gleeson, Barry Keoghan and Kerry Condon – who have also earned nods for their roles.

Celebrating his nomination, he told PA in a statement: ‘[I’m] just so grateful to the Academy for all the love it’s shared with the Banshees’ cast and crew.

‘Also, beyond honored to be lumped together with my fellow nominees. A heartfelt congratulations to all the lads.’

‘What an amazing wake-up call,’ Brendan, his close friend and co-star, agreed.

‘I’m so proud and grateful to be part of The Banshees Of Inisherin on a personal and professional level. I’m absolutely thrilled for the whole brilliant cast and everyone at home.

‘What a day for the Irish film industry on a world stage. Feels like a huge family outing on the cards.

The Banshees of Inisherin is helmed by Martin McDonagh and follows the story of Pádraic Súilleabháin (Colin), who struggles to come to terms with the fact his best friend Colm Doherty (Brendan) no longer wants to be associated with him.

Here are the nominations for the 95th Oscar Awards:

Best motion picture of the year

All Quiet on the Western Front
Avatar: The Way of Water
The Banshees of Inisherin
Elvis
Everything Everywhere All at Once
The Fabelmans
Tár
Top Gun: Maverick
Triangle of Sadness
Women Talking

Performance by an actor in a leading role

Performance by an actor in a supporting role

Performance by an actress in a leading role

Performance by an actress in a supporting role

Applause from Tell It like a Woman, Music and Lyric by Diane Warren
Hold My Hand from “Top Gun: Maverick, Music and Lyric by Lady Gaga and BloodPop
Lift Me Up” from Black Panther: Wakanda Forever, Music by Tems, Rihanna, Ryan Coogler and Ludwig Goransson; Lyric by Tems and Ryan Coogler
Naatu Naatu from RRR, Music by M.M. Keeravaani; Lyric by Chandrabose
This Is A Life from Everything Everywhere All at Once, Music by Ryan Lott, David Byrne and Mitski; Lyric by Ryan Lott and David Byrne

All Quiet on the Western Front
Bardo, False Chronicle of a Handful of Truths
Elvis
Empire of Light
Tár

Babylon
Black Panther: Wakanda Forever
Elvis
Everything Everywhere All at Once
Mrs. Harris Goes to Paris

The Elephant Whisperers
Haulout
How Do You Measure a Year?
The Martha Mitchell Effect
Stranger at the Gate

The Banshees of Inisherin
Elvis
Everything Everywhere All at Once
Tár
Top Gun: Maverick

Achievement in makeup and hairstyling

All Quiet on the Western Front
The Batman
Black Panther: Wakanda Forever”Elvis
The Whale

All Quiet on the Western Front
Avatar: The Way of Water
Babylon
Elvis
The Fabelmans

The Boy, the Mole, the Fox and the Horse
The Flying Sailor
Ice Merchants
My Year of Dicks
An Ostrich Told Me the World Is Fake and I Think I Believe It

All Quiet on the Western Front
Avatar: The Way of Water
The Batman
Elvis
Top Gun: Maverick

All Quiet on the Western Front
Avatar: The Way of Water
The Batman
Black Panther: Wakanda Forever
Top Gun: Maverick

It has been wildly popular with critics, and nabbed a whopping nine nominations – tied with Netflix’s All Quiet On The Western Front.

Only Everything Everywhere All At Once has racked up more nods, with 11 mentions.

Colin has already enjoyed a successful awards season, as he was recently named best actor in a musical or comedy at this month’s Golden Globes.

‘To work on this film, I never expect films to work or to find an audience and when they do, it’s shocking to me,’ he told the crowd.

‘I’m horrified by what’s happened around Banshees over the last couple of months, in a thrilling kind of way.’

The Oscars are due to take place in Los Angeles on March 12.

Colton Underwood Weighs in on Clare's 'Bachelorette' Exit: 'Good for Her!'