Home » Entertainment » Diego Cortez, a Scene Shaper in Art and Music, Dies at 74

Diego Cortez, an influential figure in New York City’s Downtown art and music scenes who in 1981 curated a massive exhibition featuring dozens of artists that brought the 20-year-old Jean-Michel Basquiat to public renown, died on Monday in Burlington, N.C. He was 74.

The cause was kidney failure, his sister, Kathy Hudson, said. He died in hospice care at her house but had been living nearby in Saxapahaw.

Mr. Cortez seemed to be everywhere in SoHo, Tribeca and beyond in the late 1970s and early ’80s. He was a founder of the Mudd Club, a gritty, boundary-pushing nightclub that opened in 1978. He performed with Laurie Anderson and Kathy Acker; directed music videos for Blondie and the Talking Heads; mounted shows of drawings and photographs by the rock singer-songwriter Patti Smith; and wrote “Private Elvis,” a book with photographs of Presley’s time in the Army that Mr. Cortez found in West Germany.

Then came the “New York/New Wave” show in 1981. Held at the cutting-edge P.S. 1 Contemporary Art Center (now MoMA PS 1) in Long Island City, Queens, the exhibition demonstrated Mr. Cortez’s eclectic knowledge of the visual and musical worlds that he’d been immersed in since he moved to New York City.

He recruited more than 100 artists for the show, among them Ms. Acker, Robert Mapplethorpe, Nan Goldin, Keith Haring, Andy Warhol, David Byrne, William Burroughs, Futura 2000, Ann Magnuson, Fab 5 Freddy and Basquiat, whom he had met on the dance floor of the Mudd Club.

“It was huge — literally 600 to 700 works of art that took three weeks to install, using two installation crews,” Alana Heiss, the founder of P.S. 1, said by phone. “He was very persuasive: we started with one group of galleries on the first floor and ended up on two floors.”

“Diego was full of unquenchable passion,” she said.

Curt Hoppe, a photorealist painter whose work was in the exhibition, recalled: “He brought uptown and downtown together, graffiti and downtown artists, and he hung it in an unusual way, splattering everything on the walls. It was a riveting show.”

He added, “Diego was the epitome of cool.” 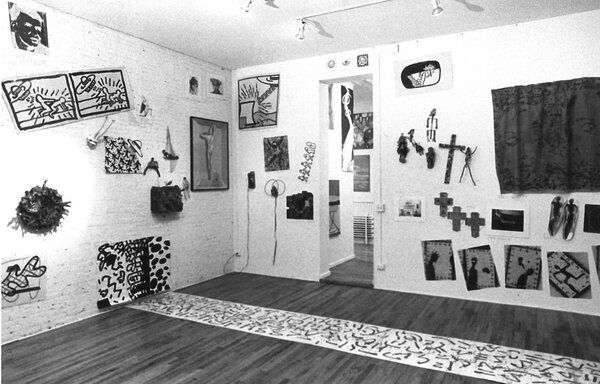 In a maximalist show that Mr. Cortez packed with existing and future stars, Basquiat was introduced to a wider world. Known first for his graffiti art, he had morphed into a painter who incorporated images of angular people and symbols with words and phrases. The show, for which Basquiat created about 20 new works, brought him to the attention of dealers. By the time he died in 1988 at 27, he was a superstar.

“What makes this work is the intensity of the line,” Mr. Cortez said in 2017 when the Basquiat portion of “New York/New Wave” was partly restaged at the Barbican Art Gallery in London. “Jean-Michel was really more of a drawer. It keeps that innocent aspect, that childish aspect that’s important, because it’s slightly not adult.”

Mr. Cortez remained linked to Basquiat long after the P.S. 1 exhibition. He curated a few more shows of his work; advised his estate and served on its authentication committee; acted as a consultant to Julian Schnabel when Mr. Schnabel made the film “Basquiat” (1996); and played a bit part as what the credits called a “fist-fighter at the Mudd Club” in “Downtown 81,” another film about Basquiat, from 2001.

James Allan Curtis was born on Sept. 30, 1946 in Geneva, Ill., and grew up nearby in Wheaton. His father, Allan, was a warehouse manager for a steel company, and his mother, Jean (Ham) Curtis, was a manicurist.

After graduating from Illinois State University with a bachelor’s degree, he earned a master’s degree in 1973 at the School of the Art Institute of Chicago, where he studied film, video and performance art. His teachers included the avant-garde filmmaker Stan Brakhage and the video artist Nam June Paik.

He changed his name to Diego Cortez before moving to New York City in 1973, adopting it as an artistic pseudonym and as a reflection of the Hispanic neighborhood in Chicago where he had lived.

Once in New York, he worked as a studio assistant to the conceptual artist Dennis Oppenheim and then to the video and performance artist Vito Acconci. Over the next few years, as he became further enmeshed in the Downtown music and art worlds, he held a variety of jobs, including one as a security guard at the Museum of Modern Art. The job inspired Ms. Anderson in 1977 to release “Time to Go (For Diego),” a song that tells how Mr. Cortez, working the late shift, would tell people when it was time to leave:

Or, as he put it, snap them out of their … art trances.

People who had been standing in front of one thing for hours.

He would jump in front of them and snap his fingers.

Mr. Cortez’s career after “New York/New Wave” was multifaceted, but he never organized another enormous exhibition like that one. He was an occasional agent and curator; collaborated on projects with his friend Brian Eno, the innovative musician and producer; and served as an art adviser to the Luciano Benetton and Frederik Roos collections. He composed an album, “Traumdetung” (2014), a mix of music and his snoring. And at one point he tried, unsuccessfully, to start a museum in Puerto Rico.

“His main goal was to to support artists by having collectors buy their work or to get their work into museums,” said his sister Ms. Hudson, who organized exhibitions with her brother at the John Hope Franklin Center at Duke University, where she worked.

In addition to her, Mr. Cortez is survived by another sister, Carol Baum, and a brother, Daniel Curtis.

Patti Smith, in a phone interview, said she first got to know Mr. Cortez in the 1970s. He later urged her to resume working on her visual art, which she had largely stopped pursuing during a long hiatus from public life. “He was a bridge to helping me get my feet back on the ground,” she said.

He helped curate a show of her drawings and photos at the Andy Warhol Museum in Pittsburgh in 2002 and an exhibition of her photos in 2010 at the New Orleans Museum of Art, where he was the curator of photography at the time.

“He didn’t like to stand in other people’s light,” Ms. Smith said. “He wanted Basquiat to stand on his own. He wanted me to stand on my own at my exhibition in New Orleans. He was really interested in seeing people he thought had promise flower.”

‘One Day at a Time’ saved: Cancelled Netflix show revived by Pop TV