It seems that Emilia Clarke’s professional life mirrored that of her iconic “Game of Thrones” character, Daenerys Targaryen.

In the most recent episode of Dax Shephard’s podcast “Armchair Expert,” the 32-year-old actor admitted that when she was plucked from obscurity to play a pivotal role on the HBO smash hit at the age of 23, she couldn’t believe it and accepted the job before reading the script for the pilot. Once she got the script and realized how many nude and sex scenes she’d be shooting, she thought, “Oh, there’s the catch.”

Although Clarke said she mentally prepared herself for shooting these types of scenes, once she was naked on set, she felt extremely uncomfortable. But because she was so green in the industry at the time, she felt she was “not worthy of requiring anything.”

“I’m not worthy of needing anything at all … whatever I’m feeling is wrong,” Clarke recalled thinking during her early days on set. “I’m going to go cry in the bathroom, and then I’m going to come back and do the scene and it will be completely fine.”

The actor said that today, she is “a lot more savvy with what I’m comfortable with, and what I am OK with doing,” but it took her a while to get to that point. And it required the strength to stick up for herself.

“I’ve had fights on set before where I’m like, ‘No, the sheet stays up’, and they’re like, ‘You don’t wanna disappoint your ‘Game of Thrones’ fans’. And I’m like, ‘Fuck you,’” she said.

Clarke credited her former co-star Jason Momoa, who played her husband Khal Drogo in the show, for teaching her what is acceptable and unacceptable on a set while shooting nude scenes. She noted that she’d often hear Momoa yelling, “Could we get her a fucking robe? Could we get her a goddamn robe? She’s shivering!” to the crew after they’d wrap a more risqué scene. 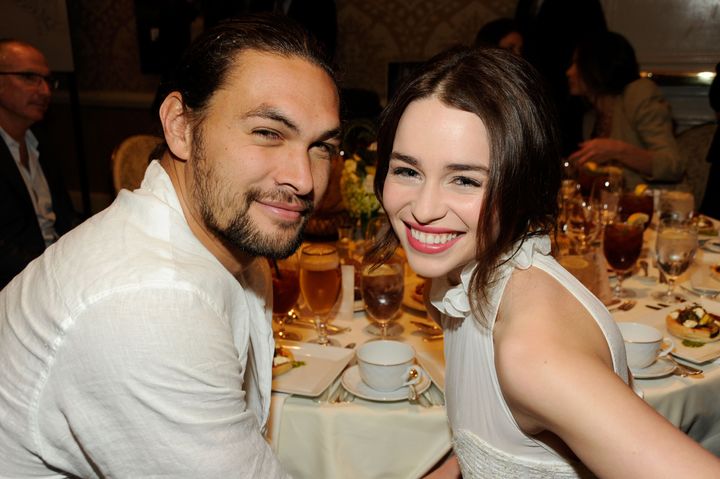 “It was definitely hard,” Clarke said of her time on set during the first season. “Which is why the scenes, when I got to do them with Jason, were wonderful, because he was like, ‘No, sweetie, this isn’t OK.’ And I was like, ‘Ohhhh.’”

She noted how “fortunate” she felt to have Momoa — who had more film experience than she did at the time — take her under his wing.

“He was so kind and considerate, like cared about me as a human being,” she said.

Thanks to Momoa’s guidance, Clarke learned how to set boundaries. So when it came time for her to shoot her final nude scene on the show, Clarke said that she actually felt empowered.

How Old Is the Cast of Riverdale in Real Life? Let's Break It Down