If you cast your mind back to 2010, you might remember the pretty shocking moment that a then 23-year-old Heidi Montag revealed the results of the ten cosmetic procedures she’d had carried out in one day. 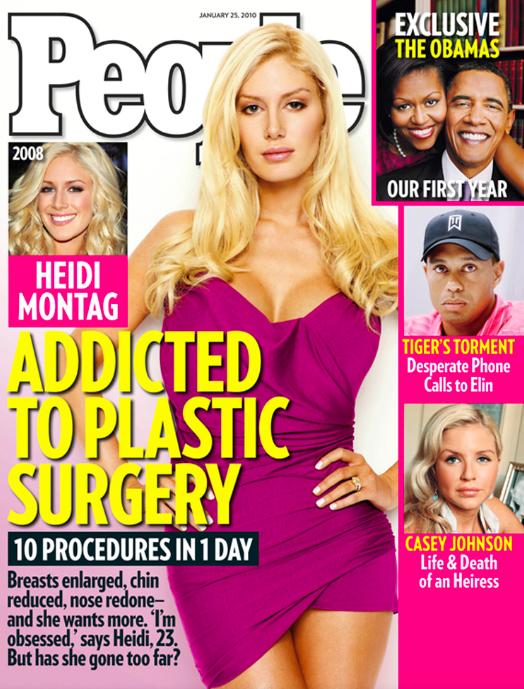 The aftermath of Heidi’s surgery was shown in the sixth season of The Hills, with her mother’s heartbreaking reaction the reason for their two-year-estrangement. 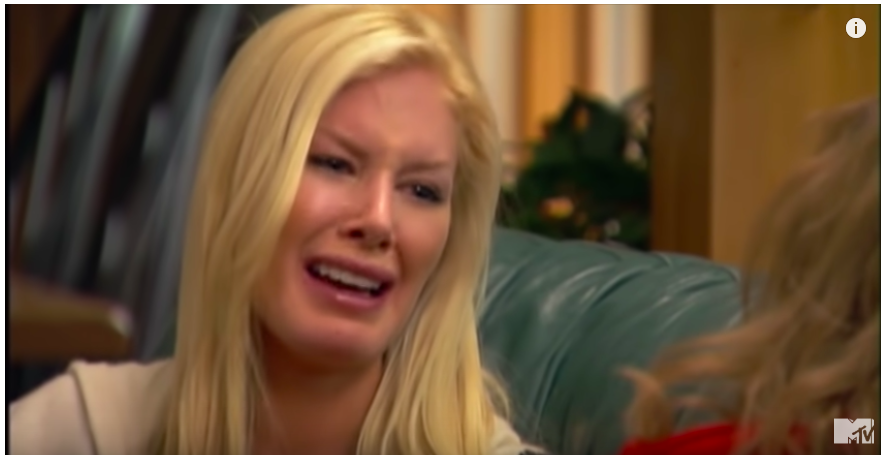 Then, last year, Heidi revealed that while her surgery was treated as something of a joke by the tabloid media, it was actually incredibly serious. In fact, her heart briefly stopped during her recovery.

Speaking to Paper, Heidi explained: “Spencer thought he lost me. I died for a minute. With that much surgery, I had to have 24-hour nurse care. I was at a recovery centre and had Demerol — a highly addictive narcotic drug — to deal with the pain because it was so extreme. My security guards called Spencer and told him, ‘Heidi’s heart stopped. She’s not going to make it.’ And I easily could’ve. Cutting yourself up isn’t something I’d recommend, and Demerol isn’t anything to play around with. That’s how Michael Jackson died.”

Well, now that The Hills is back on our screens, of course the subject of Heidi’s surgery has come up again. And, in a brand new interview, Speidi have addressed the reasons for her electing to have so many procedures, and the effect it’s had on her since.

Speaking to Cosmopolitan, husband Spencer Pratt revealed that Heidi decided to have surgery because of trolls and tabloid comments about her appearance — and even brought the surgeon print outs of the comments as a point of reference.

Missing carrying around my little baby… I LOVE having a toddler, it’s all just flying by! So thankful for my family! #blessed

Spencer said: “Heidi thought people would stop criticising her if she got surgery. Everything she did came from people criticising her in the comments on Us Weekly and People magazine. She brought print outs of what the trolls and haters said to the doctor and said, ‘Can we do something about this?'”

“Everyone’s insecure,” he continued, “But it’s different when you’re young and on TV and everyone’s talking about you. And it’s upsetting that you can go to a doctor and say, ‘Here’s what I hate about myself,’ and he’ll say, ‘I can fix that. For free.'”

I’ve been reflecting on life and I am going to try not to make the same mistake this time. I’m only human and doing my best. Praying for God’s grace and favor P.S. love my @prattdaddy crystals 🦸🏼‍♀️

And Spencer added that while he and Heidi regret the “negativity” the surgery has brought to their lives, he feels frustrated that other people in the public eye aren’t as truthful about surgery as Heidi was.

He said: “People always ask if Heidi regrets it, and I think at this point it’s like, it is what it is. I’m sure many times over the past 12 years there’s been regret over how much negativity it brought. There’s people all over television — maybe even MTV — with new faces and nobody attacks them because they never come forth and are honest with their journey. Everyone else is all, “Oh, it’s just my lip kit. It’s squats.” The whole game is everyone’s getting surgery and lying about it.”

Heidi went on to say that being on TV “amplified” all of her “perceived flaws,” but that she believes she was too young to have made such a life-altering decision about her body.

What a magical night @prattdaddy Crystal kickback! Been such a blessing watching @spencerpratt vision and love of crystals take off! #crystals #party #hollywood #thehills #prattdaddycrystals

“I was way too young,” she said, “And was under so much pressure because it was the beginning of comment sections and negativity and hate on the internet. I was just really self-involved at the time, but I was also on TV where every perceived flaw is amplified. I think I looked in the mirror a little too much. I wish I had waited and not made a decision so young because I have long-term health complications.”

And she also said that people should be taught to look beyond before-and-after photos of surgery since they “glorify” the process.

She said: “Obviously, it’s your body and I’m not against plastic surgery, but everyone always shows you the before and after pics. They don’t show you how devastating the recovery is. I don’t regret a lot of my enhancement, but plastic surgery isn’t something that should be glorified. Take it seriously.”

You can read the full interview with Heidi Montag and Spencer Pratt here.

Ellie Woodward is acting celebrity editor for BuzzFeed and is based in London.

Got a confidential tip? Submit it here.