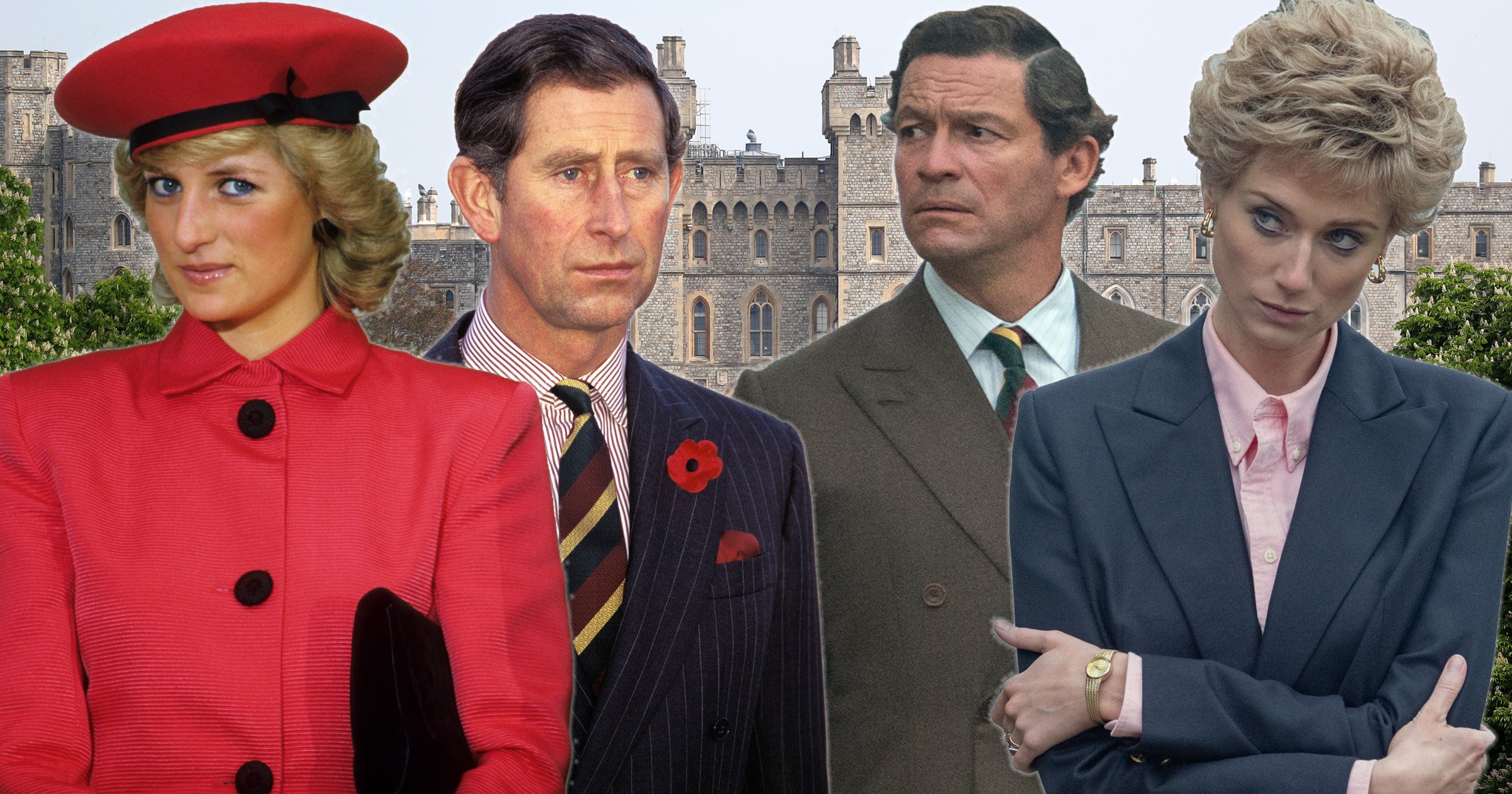 As she stands amongst the rubble of her once grand castle, Imelda Staunton’s Queen Elizabeth II looks particularly small.

She surveys the damage in her large duffle coat, her face etched with sadness. She is alone, vulnerable, in the ruins of her home.

It’s a powerful image to tease the fifth season of prestige Netflix drama, The Crown; the charred ruins of Windsor Castle, symbolic of a crumbling monarchy facing crisis.

The latest series of the hit show will document the late Queen’s infamous ‘annus horribilis’ of 1992, as well as other events of the nineties that shaped the future of the royals – most notably, the break-up of Prince Charles and Princess Diana, and the subsequent media fall out.

The timing of this new series is particularly uncomfortable for royal commentators and royalists alike. Hitting audiences globally just nine weeks after Queen Elizabeth II passed away, season five is expected to dive head-first into one of the royal family’s most scandalous periods. Dramatisations of events such as ‘tampongate’ are likely to be highly embarrassing to a newly ascended monarch, yet to formally establish himself, to be reminded of a past that hasn’t always portrayed him in the best (or most likeable) light.

‘King Charles and the Queen consort will be very concerned about what The Crown shows,’ royal commentator Richard Fitzwilliams tells Metro.co.uk. ‘At the moment, they’re riding on the crest of a certain amount of popularity for obvious reasons.

‘With the Queen no longer with us, Charles has made a strong start – he’s shown his amazing physicality going to various parts of the kingdom after her death. But now, reminding everyone what happened in the 1990s, obviously this is the last thing that the royal family want.’

Despite Queen Elizabeth II’s ongoing health problems, The Crown has never shied away from more uncomfortable plotlines for the royals – nor have they denied embellishing some of the more contentious stories.

History seemingly provides writer Peter Morgan with the stabilisers, before he chooses to apply sprinklings of dramatic licence to make for more tantalising television.

Previous seasons of the show have played fast and loose with chronology of certain events; Princess Anne’s fling with Andrew Parker Bowles in the series appears to have overlapped with Prince Charles’s relationship with Camilla – in reality, it’s thought both courtships happened with a few years distance of one another. Other relationships have also been exaggerated for dramatic effect – in season two the storyline tiptoed around whether the Duke of Edinburgh was unfaithful to the Queen with ballerina Galina Ulanova. Meanwhile, this new series speculates whether Prince Philip was ever more than just friends with Penny Knatchbull, Countess Mountbatten of Burma.

Unsurprisingly, these sorts of innuendos have left royalists unimpressed. Dickie Arbiter, who previously served as a press secretary to Queen Elizabeth II, describes such deviations from recorded history as ‘tacky’.

‘It’s dramatic licence gone berserk,’ he tells Metro.co.uk. ‘It’s particularly unfair as many of the royal family who are depicted in The Crown have passed and so can’t counter untruths. It’s fake history on real characters.’

Speculating upon relationships and fudging dates for on-screen entertainment is one matter, but some have taken umbrage with The Crown’s exploration of politics during this time.

Former Prime Minister, Sir John Major, blasted the series as ‘a barrel-load of malicious nonsense’ after it transpired the new series will include scenes seeing Prince Charles asking Major to encourage his mother to abdicate.

Major’s criticism came at the same time as esteemed actor, Judi Dench, called for a disclaimer to be added to The Crown, citing the recent death of the Queen as a key reason for doing so.

‘The closer the drama comes to our present times, the more freely it seems willing to blur the lines between historical accuracy and crude sensationalism,’ she wrote in an open letter to Netflix. ‘No-one is a greater believer in artistic freedom than I, but this cannot go unchallenged.’

While the streaming platform initially responded by stating it has always ‘been presented as a drama based on historical events’, Netflix eventually relented, and has now added a short note to the trailer for season five.

‘Inspired by real events, this fictional dramatisation tells the story of Queen Elizabeth II and the political and personal events that shaped her reign,’ it reads.

However, those who work on The Crown have always robustly defended its right to embellish the truth.

‘Peter is very, very insistent, and so am I, that this is not a history documentary,’ Robert Lacey, the show’s historical consultant, has said in a previous interview. ‘We’re not pretending this is a chronological record of those years. There are lots of documentaries that do that sort of thing. This is a drama which picks out particular objects.’

But royal experts have argued the choice of subjects that are observed in The Crown may point towards an agenda.

Having largely overlooked quite serious events such as Prince Anne’s kidnap attempt in the 1970s, and assassination attempts against Queen Elizabeth II, but suggesting the Queen had to fake sympathy with families of victims of the Aberfan disaster in 1966, Richard Fitzwilliams argues Peter Morgan’s plotlines ‘are designed to embarrass.’

‘There are tremendous sensitivities involved here,’ he explains. ‘The Crown really twists things to get audiences.

‘And the fact it has an A-List cast and stellar production values gives it an element of prestige and believability, even when the scene has been exaggerated.’

Elsewhere, Dickie Arbiter argues Netflix’s wide international audience may take parts of The Crown as gospel that British viewers, who are more attuned to recent history, are willing to take with healthy pinch of salt.

The latest series re-enacts Princess Diana’s now infamous 1995 Panorama interview, which has gone viral on Twitter with a a side-by-side comparison of the the actual interview. in the run-up to The Crown’s season five launch.

However, by being so faithful to the source material of a widely watched interview, fictional events are given verisimilitude that a more naïve viewer may swallow without question – for example, the trailer for The Crown sees Elizabeth Debicki tell Prasanna Puwanarajah’s Martin Bashir: ‘I won’t go quietly, I’ll battle until the end.’ In reality, there is no record of Diana having ever said that.

‘Brits are fairly sensible,’ Arbiter explains. ‘They know what goes on. They make up their own mind. But there’s a bigger audience outside the UK, and some countries will believe every word of it – particularly those in the United States.

‘But it’s fake history, and it’s misleading to not differentiate between the truth and fiction. It’s exploitative and it’s muddying people’s reputations.’

It’s of little surprise that The Crown, whether you’re a staunch royalist or ardent republican, continues to appeal to large swathes of people across the globe, and whether Peter Morgan intended it to or not, it is seen as an authority on modern royal history.

When Queen Elizabeth II died in September, the series rocketed towards the top of the Netflix charts – logging 17.6 million hours viewed in the week after she passed: an increase of 800%. Since it started in 2016, it is thought that 76 million households have tuned into The Crown.

The popularity of the series may have initially stemmed from the ultimate unknowability of Queen Elizabeth II, who embodied the royal mantra of ‘never complain, never explain’ – especially during its earlier seasons, with Claire Foy’s depiction of a young Elizabeth a novelty for people who only ever knew the Queen as an older monarch.

However, the later series of The Crown are expected to appeal for the opposite reason: seeing the scandal that has hounded Prince Charles even until the present day played out on screen.

‘There is an interest in the royal family as they are so close but so far away from us,’ pop culture expert Nick Ede explains. ‘Viewers of The Crown have lived with the Royal Family all their lives, and we are fascinated by the ins and outs, the scandals and the stories that have us hooked. We only need to look at musicals such as Six, which tells the story of Henry VIII’s wives, to look at the enduring popularity of royals.

‘They are intrinsic in our society and make up the fabric of who we are today.

‘In previous series, the producers have had no issues with fictionalising situations as the stories are firmly set in the past. The problem with the new series is that they are focusing on the current monarch, his ex-wife and his current wife, and this is where fact and fiction blur.’

Ede continues: ‘The current appeal of the royal family is sky high and they are enjoying a lot of good will but with the shadow of a fictionalised account of true people’s lives, there will be many blurred lines. A lot of people will take what they see as real life – we know there are many Diana fanatics who still believe in conspiracy theories!

‘Now the royals are having to live through it again and new people will have their own opinions – it will be a difficult time for the royal family to have this dredged up again.’

However, the death of the Queen has shown for many people that there is still a sense of pride and respect for royalty. A YouGov poll found 63% of people believed Charles will make a good King, and the miles of queues to see the Queen lying in state, or to catch just a glimpse of the new King himself,  shows it will take far more than a Netflix drama – even one as widely watched as The Crown – to really put a dent in their overall popularity.

‘This series won’t heed the destruction of the royal family – if you go back in history, they have lived through plenty of tumultuous times,’ Arbiter says. ‘There’s just an innate fascination of monarchy.  ‘Through it all, Brits are proud that we have a royal family that is still functioning today and it’s still recognised for who they are, what they are, and what they do.’

The Crown is available to view on Netflix.