We’re seeing a new trend on Hollywood red carpets — celebs are starting to bring their kids as their respective dates for major industry events. The latest star to turn a movie premiere into a family affair is Jennifer Connelly. The actress graced the red carpet of the Top Gun: Maverick premiere in San Diego yesterday not only with her husband of nearly 20 years, fellow actor Paul Bettany, but also Connelly’s eldest son, 24-year-old Kai Dugan.

We couldn’t get over how good this trio looked on the red carpet. First of all, the location was totally ideal for the long-awaited sequel to the beloved 1986 film starring Tom Cruise (who was also in attendance, of course). The stars posed for photos and entertained a few interviews on the USS Midway in San Diego. There, Connelly, Bettany, and Kai posed for a series of photos — and looked so sleek and sophisticated in their premiere duds. 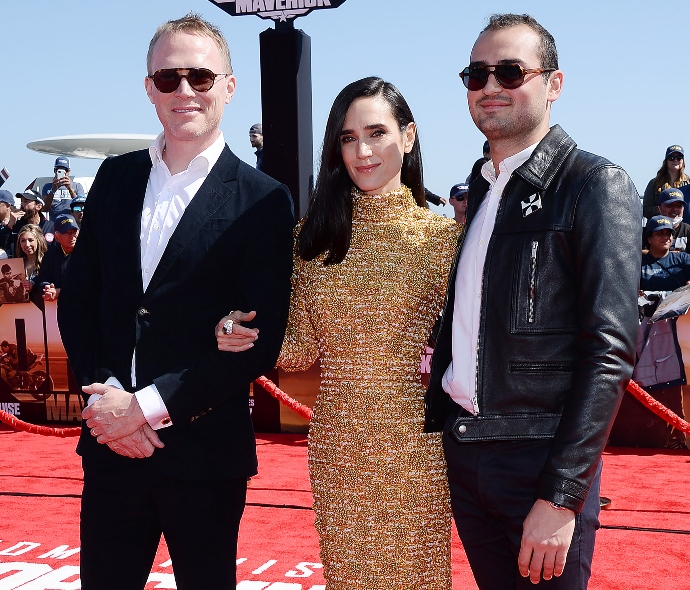 Connelly wore a stunning Louis Vuitton gown and posed arm-in-arm with her husband and eldest son. Both Bettany and Kai sported snazzy (almost matching) shades. It’s not very often that Bettany and Connelly’s kids make appearances on the red carpet. In fact, it’s very rare fans have caught a glimpse of them — save for what Bettany will post on social media from time to time. Nearly a year ago, Bettany and Connelly’s son Stellan celebrated his high school graduation, and Bettany took to social media to commemorate the occasion.

The actor shared some photos prior to the ceremony (which included Kai) and a selfie with Stellan after the milestone moment. Connelly shares Kai with former partner David Dugan. Shortly after her relationship with Dugan ended, the actress met Bettany while filming the 2001 film A Beautiful Mind, for which Connelly won the Oscar for Best Performance by an Actress in a Supporting Role. The two married in 2003, welcoming son Stellan the same year and daughter Agnes in 2011. Since their marriage, Bettany has almost always referred to Kai as his son, which is very touching. Now that Kai has hit the red carpet, perhaps we’ll see more of Stellan and Agnes as they get older, too. But until then, we love that Connelly turned this occasion into a real family affair — let’s hope it’s the first of many!

Before you go, click here to see celebrity kids who are all grown up.