Megan Fox is trying to set the record straight about whether she left her 15-year relationship with Brian Austin Green for Machine Gun Kelly. Unfortunately, she’s only making things more confusing. 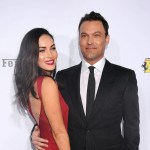 In a new interview with InStyle, Fox talks extensively about Colson Baker, the real name of the musician with whom she is deeply in love. As she has previously said of meeting Baker on the set of Midnight in Switchgrass, the connection was instant.

“I looked into his eyes [and] I felt the most pristine, most gentle, most pure spirit,” Fox told Nylon. “My heart shattered immediately and I just knew that I was f**ked.”

This movie set meeting would have been in early 2020 as the first rumors of COVID-19 were making their way through the U.S., soon to shut down filming.

In Fox’s new InStyle interview, however, the reporter writes that while Fox and Baker did meet this way and instantly hit it off, “Fox clarified that she hadn’t met him before she filed for divorce from Green and made sure to note that [Baker] had ‘nothing to do with it.’” But according to E! News, Fox filed for divorce in November 2020 — well after she’d first met Baker on set.

Hmmm. This relationship timeline just doesn’t quite work out if she and Baker met and her “heart shattered immediately” in early 2020, and especially with her appearing in Machine Gun Kelly’s music video in May 2020. What?!

Fox’s statements may be a bit of rewriting her own memory — whether consciously or unconsciously — to tell the story she believes, or it may simply be that we the public don’t get the exact info. It’s believed that Fox and Green separated in late 2019, so in Fox’s mind she was single and ready to mingle when she met Baker, even if she hadn’t quite filed the divorce papers yet.

And really, it’s none of our business. What matters is that the people involved know the truth and are moving forward with their lives.

Before you go, click here to see all the celebrity couples who met on set.