It was love at first sight for Miles Teller when he looked into Prince William‘s ocean blue eyes, and like most who experience the feeling, Teller was a bit disarmed during his first meeting with the Prince of Wales and his wife, Kate Middleton — which caused him to make a royal whoopsie.

In his recent appearance on The Tonight Show Starring Jimmy Fallon, Teller relayed his experience meeting the royal couple at the London premiere of Top Gun: Maverick, and it was nothing short of hilarious.

Teller explained, “They give you, like, a kind of rules, like dos and don’ts. And there’s, you know, a lot of etiquette, which deservingly so. I kind of had a sheet to prep to make sure I didn’t mess it up.”

Fallon held up a photo of the occasion, in which Teller is shaking hands with a surprised-looking Prince William while Kate is laughing and Jennifer Connelley is looking mildly concerned. Fallon says, “Can you tell us the story of what’s going on with this?”

“I think right off the bat I messed up,” Teller admitted. “You’re not supposed to extend your hand right off the bat unless they do, but… I felt the vibe, so I was like, ‘I’m going in, I’m going in,’” Teller explained while Fallon cracked up behind his desk. He continued, “And to their credit, they were very disarming.”

“I think right there, I’m honestly lost in Prince William’s, in his eyes,” Teller joked. “I mean, blue as the bluest ocean, Jimmy, what do you want? Bora Bora.” 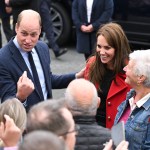 
Prince William Wants Some Credit for Being an Involved Dad

While he was complimentary of Kate as well, saying, “She’s beautiful and very, you know, cordial and holds herself so well, yeah, regal,” Prince William was the one for Teller. “With William, I don’t know. I just, I blacked out,” he gushed, adding, “But I think he’s a lifelong fan now.” Fallon playfully responded, “Now he has to be, yeah. He felt the vibe was the best.”

Before you go, click here to see more photos of Prince William & Kate Middleton through the years.