Home » Entertainment » Muslims are *still* misrepresented in film and TV, so how do we change the script?

Two years ago, one of the most brutal terrorist attacks happened in New Zealand. Attacks such as this happen regularly outside of the west but this felt significant to those of us living within it, as the attacker targeted a mosque filled with worshippers. 51 people were killed, with dozens more injured, and families and the wider community left traumatised.

Prime minister Jacinda Ardern reacted swiftly, she showed compassion – for which she was praised – and gun laws were changed in the country too.

Fast forward to now, when our wounds are still very raw and our trauma barely processed, and a film titled They Are Us, based on the events of the Christchurch attack, has been announced. Described as an “inspirational story about the young leader’s [Ardern’s] response to the tragic events,” prompting Ardern to note that “there are plenty of stories from 15 March that could be told, but I don’t consider mine to be one of them.”

The Muslim community of New Zealand has labelled the premise and perspective of the film “exploitative” and “insensitive” and a petition has been signed by almost 75,000 people. The petitioners write: “We, the undersigned, call for the following actions to ensure the film They Are Us does not go ahead, as it sidelines the victims and survivors and instead centres the response of a white woman.”

Responding to the backlash, Dr HA Hellyer, a fellow at the University of Cambridge, tells me: “If we compare how Muslims are portrayed in English-language entertainment media – British, American, Australian and New Zealand television – the situation has certainly improved over the past decade.

“That is not necessarily as positive as one might assume, however, because we would have been starting from a pretty low bar. The impact of the internet and social media over the past decade has meant that media companies and news outlets come under a lot more pressure from the public to address issues in different ways. I’m not saying things have become perfect – they haven’t. But there’s definitely been progress.” 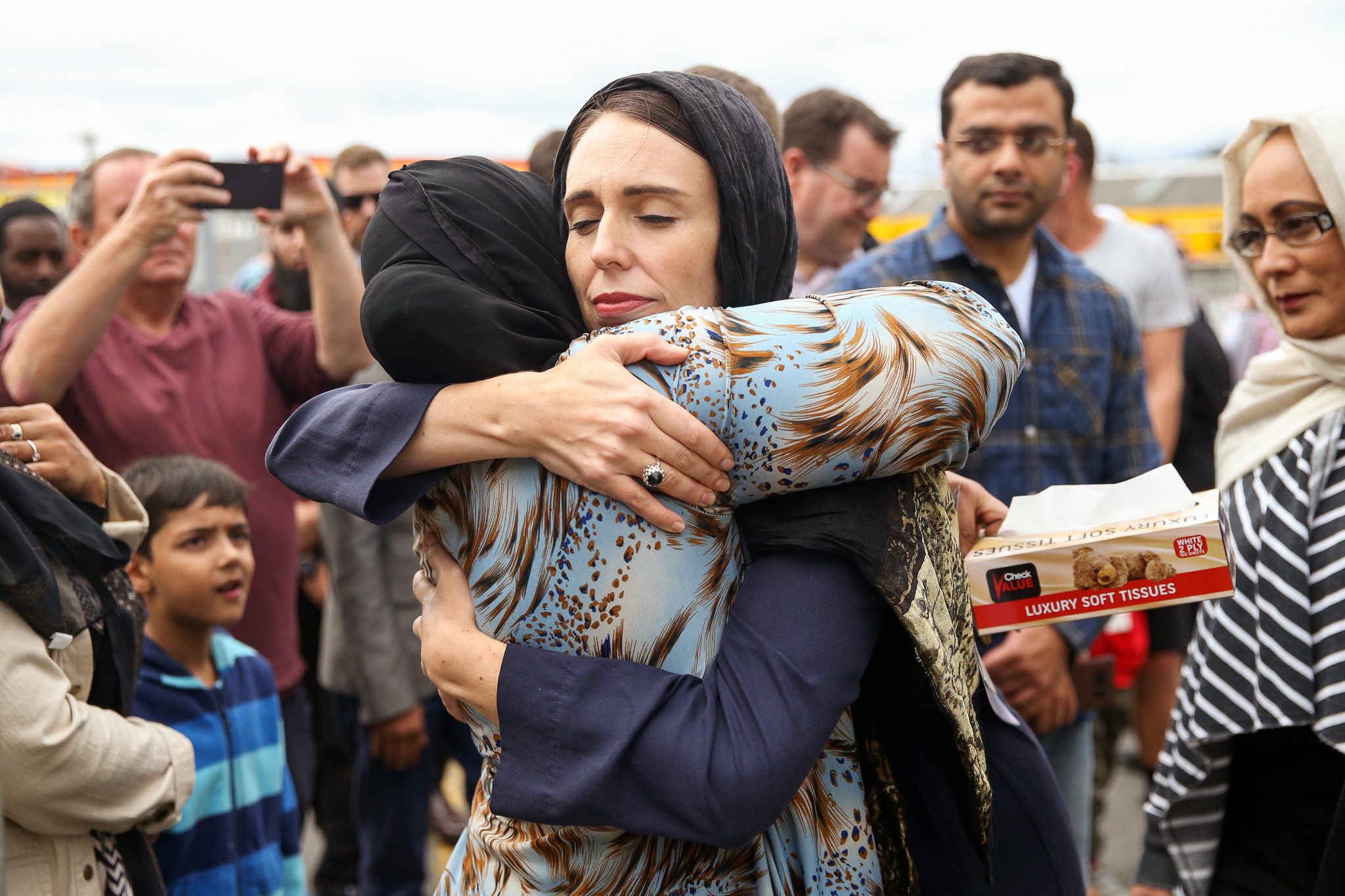 In the grand scheme of things, representation of Muslims in film and TV is minimal at best, with much of it flitting between white saviourism, terrorism or or oppression narratives, whether it’s a Muslim woman whipping off her hijab in Netflix’s Elite or the plot twist of the BBC’s Bodyguard where the terrorist turns out to be an unsuspecting Muslim woman.

They Are Us, from the little we do know about it, fits into the former category. Because, while the victims of the attack were Muslims, they have become a backdrop to the response of a white woman who simply did her job as an elected leader and showed compassion when dealing with the terror attack.

And, whether you believe the story of Christchurch should be brought to cinemas or not, one thing we should all be able to agree on is this; the story of the community directly affected by the attack is one of utmost importance. It absolutely shouldn’t be sidelined.

For the longest time, representation has simply meant sticking a Muslim anywhere in the storyline

The emphasis upon Ardern’s story shows that Muslim narratives aren’t deemed worthy on their own without a white champion. It also tells those within the community that their narratives and lived experience and identity aren’t valuable.

Sajid Varda, founder of UK Muslim Film and co chair at BFI Screen Advisory Group, tells me: “It would be a huge disservice to those who were murdered and to their families that still mourn them. Perhaps the story needs to be how the negative portrayals of Muslims and Islam in the media breeds extremism which led to the massacre in Christchurch.”

We Are Lady Parts, on Channel 4, is incredible.

Perhaps, then, the intention behind this film was good, but the execution certainly hasn’t been. And, while all stories about Muslims don’t necessarily need to be told only by Muslims, they do need to be well researched and they need to be inclusive of the community they will have an impact on.

Media consultant Aaqil Ahmed, who has worked with the BBC and Channel 4 behind the scenes on producing TV and radio, explains: “This isn’t just a Muslim story, as it is about how a New Zealander responded, so to present this film from a singular perspective is questionable.”

Emphasising that his opinion is informed by the little information available about the film, Ahmed adds: “Would making this a niche Muslim project have real world impact? Sometimes if you are trying to reach a wider audience you may need to look at things less directly. In reality, Jacinda Ardern is the person that will drive people to the cinemas.

“If handled correctly – by which I mean considering tone, premise and delivery, not to mention setting out to portray a wider point of view or multiple views – this project could work. But you need to consult the right people and the community.”

Echoing Ahmed’s sentiments, Saima Mir, a journalist, author and co-chair of the BFI’s Muslim Advisory Group, says: “Change must come at all levels within filmmaking and TV; that’s in front of the camera, and behind the scenes. For this change to be long lasting, we need allyship, and we need for decision makers to recognise their responsibility and to take the necessary steps to bring equity to this industry.”

In the days since the film was first announced, producer Philippa Campbell has resigned, explaining that she had done so after listening to concerns raised by the community.

The representation of Muslims is stuck in the rock and hard place of Muslims wanting to be represented on screen outside of stereotypes but also (and fairly so) being unwilling to engage or invest within the industry for longer than a moment of controversy because they don’t believe things will improve. Change is being made by those behind the scenes and even those in front of the camera; just look at Riz Ahmed, who recently launched a initiative for Muslim inclusion in media.

However, unless you are looking at the industry as a whole, you won’t see this progress. Because, for the longest time, representation has simply meant sticking a Muslim anywhere in the storyline; ticking a box, as it were.

Now, what we want from representation in the media as a community has changed. We have become more aware and confident in demanding we are seen as whole people, with lives beyond the dangerous clichés and stereotypes. For us, this is the next big challenge.

As a Muslim creative community, we have to be more staunch in our stance against stories that perpetuate negative tropes about Muslims and Islam

Of course, there has been some positive change; Channels 4’s We Are Lady Parts, directed and written by Nida Manzoor is a perfect example of what good representation can look like. The story, told through the lives of five Muslim women in a punk-rock band – all of whom practise their faith very differently from one another – celebrates the women without presumption. And, unlike many other TV and film projects, it doesn’t sideline their faith, nor does it portray the women as being shackled by it.

I’m also holding out hope for Marvel’s Ms. Marvel TV show, written by Bisha K. Ali, which is due to air later this year. Seeing a Muslim superhero on screen, not to mention one written by a woman of colour is long overdue, and it has the potential to lead up into a new era of what representation beyond that of sticking a Muslim in a storyline to tick a box.

“What I want people to know about being a Muslim woman”

“As a Muslim creative community, we have to be more staunch in our stance against stories that perpetuate negative tropes about Muslims and Islam,” notes Varda.

“If we distance ourselves from these projects then this will send a clear message to the industry that perhaps they need to be focusing their attention on telling more authentic and nuanced stories that unite rather than divide, that show Muslims as valued members of society and not caricatures that breed hate.It really is time to change the script.”

It’s clear that just “representation” isn’t enough anymore; the Muslim community deserves and demands more. We can only hope that filmmakers will listen.

Suddenly the Man Couldn’t See. Was His Chest Pain Connected?