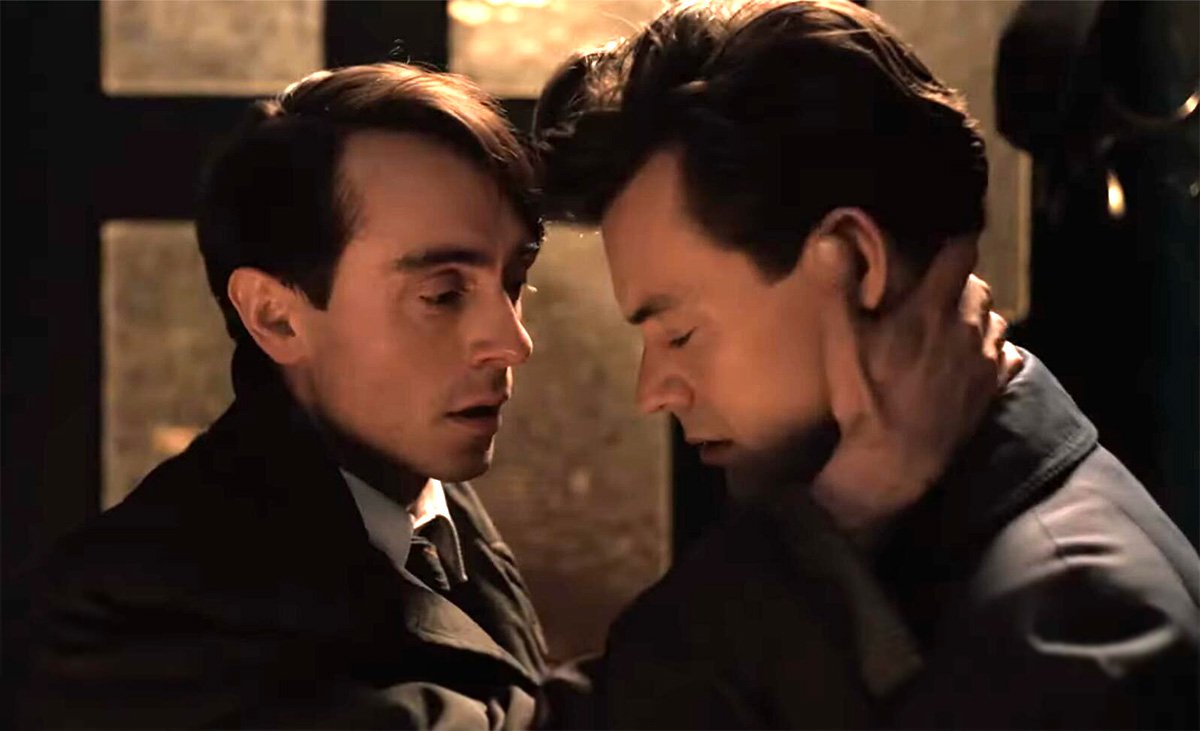 My Policeman has been described by its own cast as a movie about ‘wasted time’.

It tells the story of a policeman who pursues a romance with a museum curator at a time when homosexuality was illegal. Diary entries discovered 40 years later reflect on their secret relationship after policeman Tom Burgess spent four decades married to Marion Taylor, unable to stay with his true love, Patrick Hazlewood, due to the law.

He ‘wasted’ such a large portion of his life after settling to protect his safety, despite knowing he would always be unfulfilled.

And while the story is handled with real care and compassion, I can’t help but ask: is it one we really need to be telling?

Starring Harry Styles as Tom, the flick has, naturally, received a great deal of press. Styles stars opposite David Dawson as Patrick, and The Crown’s Emma Corrin as on-screen wife Marion.

Directed by Michael Grandage and based on the book by Bethan Roberts, the film really tugs at the heartstrings. It switches back and forth between the 1950s and the 1990s, when an older Patrick goes to stay with still-married Tom and Marion after a stroke – reminiscing over what could have been.

But despite powerful performances, from Dawson in particular, it left a sinking feeling in my stomach as I pondered the question: how many more queer movies about ‘wasted time’ do we need?

My Policeman is far from the first historical LGBTQ+ project with an emotional forbidden romance trope, and I doubt it’ll be the last. Each instance only leaves me feeling deflated at how so much of queer media centres around misery and suffering, rather than joy and celebration.

Brokeback Mountain, Maurice, Carol, Disobedience, Call Me by Your Name, Vita and Virginia, Summerland, Portrait of a Lady on Fire, Holding the Man, Ammonite, Firebird… Bored yet? Well, that’s how it feels to turn on an LGBTQ+ film only for it to focus on pain, lost time, tortured secret keeping and repressed clandestine romances.

There’s no denying that My Policeman is tender – it’s loving, and it’s warm, but it’s equally as devastating. It’s fair to say that creators handled the very real story of countless queer people with sensitivity and kindness.

Yet, as Patrick himself calls them, it dwells on such ‘wretched times.’

Kissing down dark alleyways, lying to neighbours about the truth of visitors, fearing holding hands in public, booking secret getaways just to catch a moment alone… We witness it all in My Policeman, as well as some incredibly brutal, triggering scenes of hate crimes.

From one of Patrick’s hook-ups being kicked and spat at on a cold street, to the museum curator’s beating following his arrest, My Policeman gives me something I could see any day simply by turning on the news.

Homophobic hate crimes are on the rise at a record rate, and I don’t need a movie to remind me of how awful it can be to be a victim of one. I already live with that dread each time I walk out the door as myself.

We have seen these violent scenes countless times on the silver screen, do we really need to be reminded of it with another expensive, feature-length film?

No, enough is enough. I don’t want any more films about how awful it was to be queer.

I don’t want another film to remind me that, at any moment, with a signature on a piece of paper, our rights could be placed under threat.

I want queer joy. I want escapism. Straight people get to have that in bucket loads when they go to the cinema – why can’t we? Why must we be needlessly traumatised and constantly reminded that we weren’t born with the protection to be who we are?

One moment in My Policeman really stuck with me, though. It’s miniscule but, if you notice it, it’s so poignant. An older version of Tom (played by Linus Roache) goes to the shops with older Marion (Gina McKee). There, he sees a young gay couple, out in the open, laughing, being themselves – without fear.

Tom becomes visibly upset, and has to return to the car alone to let it all out. He’s thinking about what he could’ve had, had only society allowed him the chance to be with the man he truly loved.

It’s a soul shattering moment, as you realise just how much time Tom and Patrick have lost. But, that young queer couple in the background? I want their story.

I want young LGBTQ+ or questioning people to watch themselves in a film and not walk away feeling riddled with terror and sadness. I want filmmakers to finally portray the pride of being openly queer, and the normal, domesticated things queer couples do in everyday life – like laugh at each other’s jokes on the way to the shops.

It’s getting better, there’s no doubt about it. With recent films like Bros and TV shows like Heartstopper. Even It’s a Sin which, despite its heartbreaking portrayal of the AIDS crisis, was able to also capture the magic of the queer community and how we can still fiercely live life to the full. But progress is slow.

Now, I know what you’re thinking. This is our history. LGBTQ+ people of the past suffered so we could have the freedoms we have today, and we must never forget that. And I agree wholeheartedly.

While it’s so important to acknowledge where we’ve come from and remember the battles fought by our predecessors so we could be loud and proud in 2022, all I’m asking is that we start looking to the future. That we continue to provide queer youth with optimism that their lives can be filled with romance and joy, just as they deserve.

Perhaps there’s a way of striking that perfect balance between paying tribute to the past, while also celebrating the future. But I’m yet to see it.

Perhaps that even begs the question, if filmmakers are unable to master it, and only leave queer people feeling emotionally distraught after watching their movies, are those films actually any good? I don’t believe queer representation should ever come at the harm of queer people themselves.

Instead of dwelling on what might have been, why don’t we start celebrating the time we have right now, and all the things queer people can look forward to?

24 Products That You'll Just Wanna Take Another Look At