“Hindsight is my gift,” Hannah Gadsby announces halfway through “Douglas,” her startling new stand-up show and unlikely follow-up to the groundbreaking “Nanette.”

In context, the claim is a nugget of self-deprecation; she has been talking about her autism, which often leaves her feeling confused in present-tense social situations, like the “only sober person in a room full of drunks.”

But it’s also a boast, a motto, a banner: She has spectacular rearview vision.

There’s a lot for her to look back on in “Douglas,” which opened on Thursday at the Daryl Roth Theater. Though Ms. Gadsby became famous in the United States only last year, when “Nanette” was picked up by Netflix, she lived on earth for several decades before that, mostly in Australia, without our consent or acknowledgment.

“That’s a thing you don’t know,” she says of Americans. “Other cultures reference themselves without consulting you first.”

Who makes the rules and defines the categories in which others must struggle for love and dignity is the overarching theme of “Douglas” — even though, in a typical red herring, it is named for one of her dogs. “Nanette” was likewise named for a character who had little to do with the story.

Like the earlier piece, too, “Douglas” is angry — even furious — and draws its comic energy from the effort to master and direct that anger into sharp insight and its byproduct, laughter.

Revenge would not be too strong a word for the show’s huge scope and dark aims. If it has a fault, the scale would be it: There are so many enemies to be shot down and re-educated that they eventually threaten to blur into one undifferentiated mass of awfulness. But perhaps that’s actually Ms. Gadsby’s point.

Most of them, in any case, are men. There’s the doctor who tried to put her on the Pill because he didn’t appreciate her emotions; there’s another doctor, a few centuries earlier, who “discovered” an obscure part of women’s reproductive anatomy and put his name (also “Douglas”) on it. “It’s amazing how little men have to do to be remembered,” she says.

More recently there are the men — and yes, she says, they are always men — who feel the need, after “Nanette,” to troll and disparage her. Sometimes they offer inanely paradoxical insults like “I’ve never heard of you” and sometimes they pile on to that show’s story of the violent hate crime Ms. Gadsby suffered with verbal violence of their own.

Even among non-troglodytes, “Nanette” was polarizing. A kind of self-canceling stand-up, it questioned the capacity of comedy to encompass traumas like the very one it was built on. Some critics thus doubted it was comedy at all, calling it theater or monologue or lecture, none of those words meant as praise.

In “Douglas,” Ms. Gadsby says she doesn’t care what terminology you use; that fight is a waste of time, giving too much power to those who make the categories and not enough to those who make the art. Nor will she let others define her as a failure because she’s a woman, a lesbian, “heavy of the hoof” or a person with autism.

The unusual brilliance of “Douglas” is in its long-game strategy to prove this. Making expectations both her subject and method, Ms. Gadsby begins by telling us everything she will be doing in the 95-minute set and exactly what effects she intends to achieve.

When she later collects double on the gambit — scoring for both her laughs and her prediction of them — you are struck by the daring that went into setting such a high bar. And you believe, as she suggests, that her ability to think through and execute such a plan is proof of a mind that is beautiful, not defective.

The specific content is largely successful too. Some of it, as she has promised, is relatively ordinary (though still funny) comic material built on easy targets (golfers, anti-vaxxers) and formulaic punch lines and puns. “The word ‘arugula’ sounds like a clown-car horn.” “Waldo should have to find himself like the rest of us do.”

But those are palate cleansers, lowering the audience’s defenses before the main course arrives. Acknowledging that the success of “Nanette” is “why everyone’s here — including myself,” she at first insists she’s “fresh out” of trauma to turn into material. “Had I known, I might have budgeted mine better, gotten at least a trilogy out of it.” Even so, it wouldn’t be for us: “My grief is not your train. Get off.”

Meanwhile she has carefully been stoking another train, one whose freight is the much larger trauma we all share, thanks to centuries of misogyny. Surely it’s no accident that Ms. Gadsby brings to this material the full range of comic invention she has previously been parceling out so carefully. As she approaches the show’s climax we feel the temperature change, much in the way we do when fireworks or symphonies ramp up toward their final cadences. The big guns come out.

So in answer to those men who derided “Nanette” as a mere monologue she offers another, unanswerable one. And to those who called it a lecture, not comedy, she responds with one of the funniest lectures ever, on the High Renaissance, complete with slides. (Her bachelor’s degree is in art history and curatorship.) In it, she locates the supposedly universal ideals of female beauty in the merely pervy obsessions of privileged male painters. And she convincingly explains why Titian isn’t a Teenage Mutant Ninja Turtle but ought to be.

If the mixture of ingredients does not seem as if it should cohere, the result absolutely does. American self-regard conspires with male privilege (and, in one devastating story, a form of female collaboration) to make such an overwhelming antagonist that all of Ms. Gadsby’s modes of attack wind up aimed in the same direction. Everyone is implicated, from Leonardo to Louis C.K. Since only animals (though not turtles) are unsullied, perhaps the title is not so random.

And as for whether Ms. Gadsby’s art is theater or stand-up or lecture or monologue, who cares? There’s enough trauma to go around. 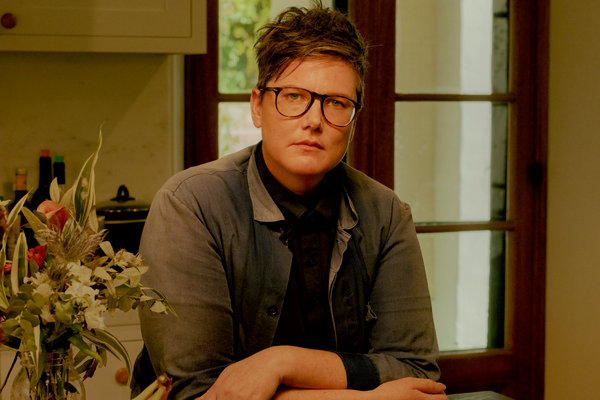 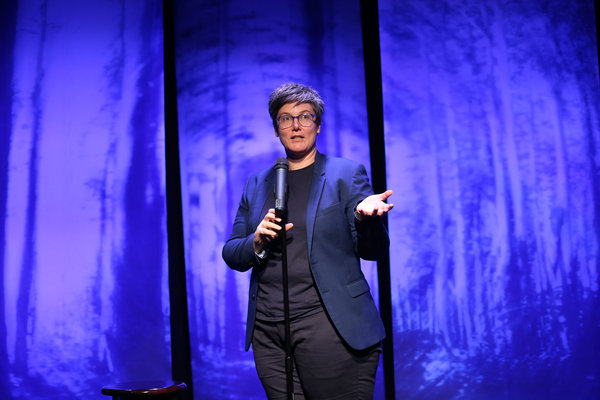 When you purchase a ticket for an independently reviewed play or musical through our site, we earn an affiliate commission.

Jesse Green is the co-chief theater critic. Before joining The Times in 2017, he was the theater critic for New York magazine and a contributing editor. He is the author of a novel, “O Beautiful,” and a memoir, “The Velveteen Father.” @JesseKGreen • Facebook