Home » Entertainment » Review: ‘The Boys’ Deconstructs the Superhero, With a Light Touch

The team of Evan Goldberg and Seth Rogen (producers) and Garth Ennis (comics writer) has given us AMC’s “Preacher,” the most inventive, audacious and purely entertaining comics-based series of the past few years. With “Preacher” on the way out — its final season begins Aug. 4 — the three are getting right back in the game, with a new show based on an Ennis comic, “The Boys,” coming to Amazon Prime Video on Friday.

“The Boys” is not pitched at the feverish level of “Preacher,” in terms of either mayhem or dark comic style — its showrunner, Eric Kripke, is the maker of network series like “Supernatural” and “Timeless,” and the eight-episode “Boys” is like a high-end, more thoughtfully assembled, slightly bloodier and sexier version of one of those conventional shows. (“Preacher” is overseen by Sam Catlin, whose previous writing and producing experience includes “Breaking Bad.”)

“The Boys” is also a little more of a known quantity because it’s a superhero show. That it’s an anti-superhero show — in which the costumed crime fighters are the bad guys, arrogant and corporatized and heedless of collateral damage to innocent humans, and the Boys of the title are a motley, disreputable bunch who take them on — doesn’t change the basic equation. The visual takeaway is still people in tights who can fly and shoot lasers out of their eyes, the wrinkle being that we’re rooting for the guy fighting back with his wits and a crowbar.

All of that said, the series is quite enjoyable, particularly in a fast and clever first episode (written by Kripke and directed by Dan Trachtenberg) that introduces us to the show’s world — marginally exaggerated from our own — and gives the show’s real hero, the distinctly non-superpowered electronics salesman Hughie (Jack Quaid), a reason to hate the supes. In a judiciously horrifying scene, we witness the accidental obliteration of Hughie’s fiancée by an out-of-control Flash-like character, A-Train (Jessie T. Usher), who’s a member of the Seven, America’s premiere superhero team.

Branded and managed by Vought, an evil corporation occupying a futuristic tower not far from the Empire State Building, the Seven are led by a patriotic blond Übermensch, Homelander (played with a potently quiet creepiness by Antony Starr of “Banshee”). He is Superman gone sour, and the show merrily frames the Seven as exemplars of American privilege, patriarchy and fraudulent celebrity culture. Homelander’s wholesome facade hides a serial liar and stalker, while the aquatic hero the Deep (Chace Crawford) is a walking #MeToo nightmare. Vought covers up their excesses while selling their services to crime-ridden cities and lobbying to have them made responsible for national defense. 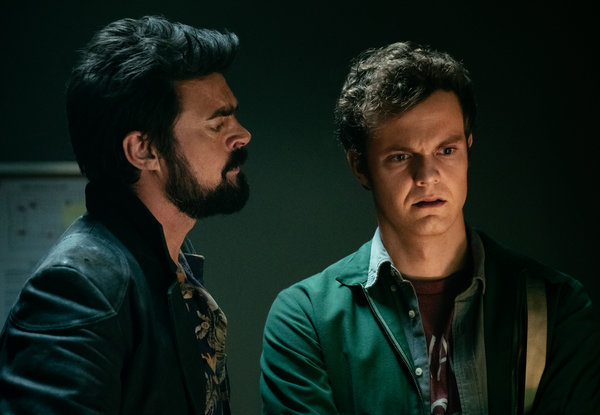 Hughie, a former fan boy now enraged and suffering from post-superhero stress, is recruited in a clandestine attempt to bring down the Seven by a bruiser named Billy Butcher (an amusing Karl Urban), who has his own reasons to want them stopped, or dead. More allies gradually join their vendetta, and the show loses some of its spark over subsequent episodes in part because of the unwieldy cast that needs to be introduced and kept busy — the Seven (including Erin Moriarty as the new member, an innocent from Des Moines), plus five Boys, plus Elisabeth Shue as a Vought executive, Simon Pegg as Hughie’s dad and Jennifer Esposito as a C.I.A. agent who has a past with Butcher. It’s a lot of bodies to pack into eight episodes.

Quaid, who took an arrow as Marvel in “The Hunger Games” (and is the son of Meg Ryan and Dennis Quaid), gives a charming, sympathetic performance as the overwhelmed but resilient Hughie, and you’re glad when he’s onscreen. And overall, the architecture of Ennis’s story — a lighter, less apocalyptic take on the kind of superhero deconstruction Alan Moore did in “Miracleman” and “Watchmen” — is interesting enough, and executed with enough panache, to pull you along. Putting the onus on Hughie to choose a true, human-scaled heroism isn’t a new idea, but it still has an emotional tug.

And the notion that the world needs to be saved from its superheros has another sneaky resonance: Vought, with its stable of 200 costumed heroes, its theme parks and film franchises (and a management Butcher calls “empty suits with Cornell degrees”), resembles nothing so much as the comics leviathans Marvel and DC. (The “Boys” comic book was first published, and then dropped, by a DC imprint.) When Hughie learns the truth about the Seven, he’s outgrowing the comic books of his youth — the kind of heroes DC and Marvel sell. “The Boys,” meanwhile, is offering the kind of smart, easygoing pleasure that most of the Marvel Netflix shows, its closest analogues, didn’t quite reach.

Mike Hale is a television critic. He also writes about online video, film and media. He came to The Times in 1995 and worked as an editor in Sports, Arts & Leisure and Weekend Arts before becoming a critic in 2009. @mikehalenyt • Facebook