Home » Entertainment » Rezo Gabriadze, Who Created Magic Out of Puppetry, Dies at 84

Rezo Gabriadze, a playwright, screenwriter and director whose fanciful avant-garde stage works, many using puppets, were presented at the Lincoln Center Festival in New York and numerous other outlets as well as at the theater named for him in his home country, Georgia, died on Sunday in its capital, Tbilisi. He was 84.

The Rezo Gabriadze Theater in Tbilisi confirmed his death. The cause was not given.

Mr. Gabriadze was known for unconventional works that challenged the audience’s imagination. In his play “Forbidden Christmas, or the Doctor and the Patient,” for instance, which was staged at Lincoln Center in 2004 and toured the United States, Mikhail Baryshnikov, branching out into acting, portrayed a man who thought he was a car.

More often, though, Mr. Gabriadze’s stage works were populated not by human performers but by puppets. Perhaps his best-known creation was “The Battle of Stalingrad,” a puppet play first staged in Dijon, France, in 1996. It examined that pivotal World War II battle, but obliquely, through individual stories. Some involved human characters, but there was also a love story between two horses, as well as an ant with a dying daughter.

“Writ terribly small, with the delicacy of lacework,” Bruce Weber wrote in The New York Times, reviewing a production at the Kennedy Center in Washington in 2000, “‘The Battle of Stalingrad’ compels the audience to unusual concentration, lest the artistry be disturbed. And artistry it is, beautiful, poignant and lingering.”

“The Autumn of My Springtime,” first seen in Lausanne, Switzerland, in 2002, was a story about a bird that drew heavily on Mr. Gabriadze’s memories of his childhood. “Ramona,” seen at the Lincoln Center Festival in 2015, was a love story between two trains.

These and other works were full of striking stage pictures and cleverly made, adroitly maneuvered puppets designed by Mr. Gabriadze and his expert team.

“As characters either powerful or weak,” Mr. Weber wrote, “his puppets, long faced, with a clattery-boned droopiness, seemingly constructed from bird legs and seashell fragments held together with string, share a frailty that feels, well, human.”

Mr. Gabriadze, who early in his career was a sculptor and then a screenwriter and film director, was most at home among his puppets.

“The puppet theater is the ideal place for me because you can draw, sculpt and truly create your characters,” he told The Post & Courier of Charleston, S.C., in 2017, when he brought his two-trains-in-love story to the Spoleto Festival USA in that city. “This is the maximum of freedom you can achieve in art. I make and do everything in my theater myself. I write the plays, choose the music — I am completely free in my decision-making.”

Revaz Gabriadze was born on June 29, 1936, in Kutaisi, in what was then Soviet Georgia. In a 2002 interview with The Times, he recalled having his imagination opened up after World War II when American movies began making their way to Georgia.

“Our generation was ‘Tarzan-ized,’” he said. “Tarzan, feminine women, men in tuxedos; this was the first time we saw these things, and it was one part of our spiritual nourishment.”

He was artistically inclined.

“In my father’s family, the men worked stone,” he told Le Monde in 2003. “They built churches or bridges. There are many delicate and ancient bridges in Georgia. Maybe that’s where my first vocation came from, sculpture.”

Those skills would prove useful when he began carving and constructing puppets. But other careers came first.

After working for a time as a journalist, he gravitated to filmmaking, writing dozens of screenplays and directing a few movies. “I was making tragicomic films,” he said. “I was always watched by the authorities, and I lacked diplomacy.”

Georgia was still under Soviet control, and it was the era of Socialist Realism in film and other genres. Realism, Mr. Gabriadze said, just wasn’t his thing.

“I can understand the human urge to put things in order,” he told The Times. “But you can’t divide life between fiction and fact. ‘Tom Sawyer’ may be a novel, but it is also an encyclopedia of childhood.” 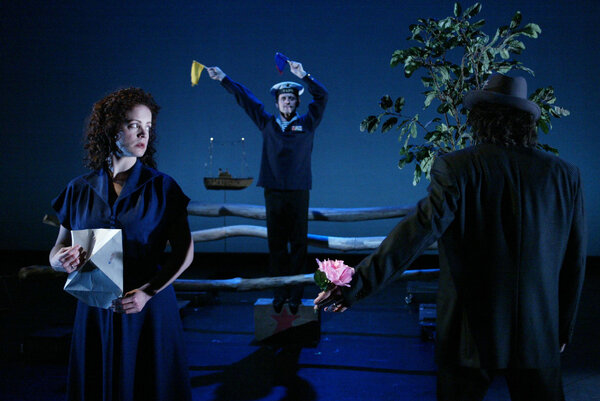 He opened his puppet theater in 1981. (In 2010 it unveiled a newly renovated space designed by Mr. Gabriadze and featuring a deliberately crooked clock tower.)

In the early 1990s, with Georgia embroiled in civil war, Mr. Gabriadze relocated to Moscow for several years, working at the Obraztsov State Puppet Theater, where he began to create “The Battle of Stalingrad.” The piece, he said, was in part a response to the civil war. But, like many of his works, it also drew on memories from his childhood.

“I was 6 years old during the Battle of Stalingrad,” he said. “I remember the word echoing through childhood.”

While taking his puppet productions all over the world, Mr. Gabriadze continued to pursue his love of art. In 2012 the Pushkin Museum of Fine Arts in Moscow mounted an exhibition devoted to his paintings, graphic works and sculpture.

Full information on his survivors was not available. A son, Levan, produced some of his shows and, in 2018, made a film about his father’s life called simply, “Rezo.”

In an interview with the travel blog Intrepid Feet First, Levan talked about his father and his work.

“The thing about Rezo is that he lives in his own bubble,” he said. “We all do. But Rezo brings you into his.”