A Colorado Rockies fan accused of yelling a racial slur at a player has been cleared of wrongdoing after an investigation found he was actually trying to get the attention of the Rockies mascot, a purple dinosaur named Dinger.

The man, seated behind home plate, sparked outrage Sunday as video appeared to show him loudly direct a racial epithet at Marlins outfielder Lewis Brinson, who was at bat in the top of the ninth inning.

The man shouted loud enough that his words were picked up on the live broadcast of the game, prompting quick condemnation.

“I’m absolutely disgusted at the language that was picked up by the mics late in the game today,” tweeted Marlins sportscaster Paul Severino. “The level of hate that was displayed has no place in this world. Unfortunately it’s still far too prevalent. We need to be better. And soon. Awful.”

The man, who wants to remain anonymous, told 9News reporter Steve Staeger he was at the game with his wife and grandkids, and was hoping to get a picture of all of them together with Dinger.

The purple triceratops was one section over, hence the yelling.

Marlins spokesperson Jason Latimer deferred to the Rockies in a message to The Associated Press, adding that Lewis didn’t hear what was yelled.

“Neither Lewis, nor any other Marlins on the field or in the dugout, heard what was shouted,” Latimer said. “We brought the matter to the attention of the Rockies. How the matter is being handled, I would have to defer to them.”

The Rockies pledged to investigate and ban the fan from Coors Field. After speaking to the man and reviewing video, however, the team concluded he was only trying to summon the Rockies’ mascot.

“The Rockies have zero tolerance for any form of racism or discrimination, and any fan using derogatory language of any kind will be ejected and banned from Coors Field,” the team said. 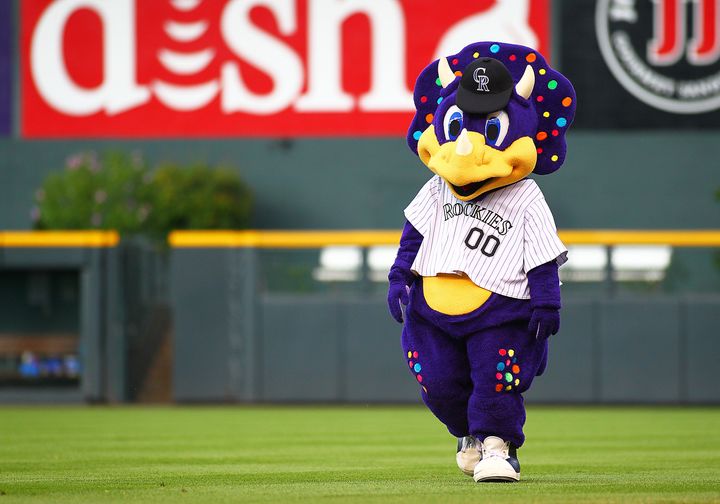 The Rockies introduced Dinger as the team mascot back in April 1994. The character is an homage to a dinosaur fossil found near home plate during the excavation of the stadium.