Home » Entertainment » Salehe Bembury Is Going With the Flow

A second project presents an entirely different set of challenges than the first. Look at Illmatic, Nas’ debut album from 1994, widely heralded as one of the greatest hip-hop albums of all time. Though its follow-up, 1996’s It Was Written, has received plenty of accolades of its own, it’s endlessly and hopelessly compared to its legendary predecessor. The weight of expectations is always much heavier on the follow-up than it is on the debut.

But if Salehe Bembury’s first New Balance 2002R collaboration, dubbed “Peace Be the Journey,” was his knockout introduction to the collaborative sphere (after years crafting shoes for everyone from Cole Haan to YEEZY and Versace), his next project — the New Balance 2002R “Water Be the Guide” — is a triumphant victory lap. 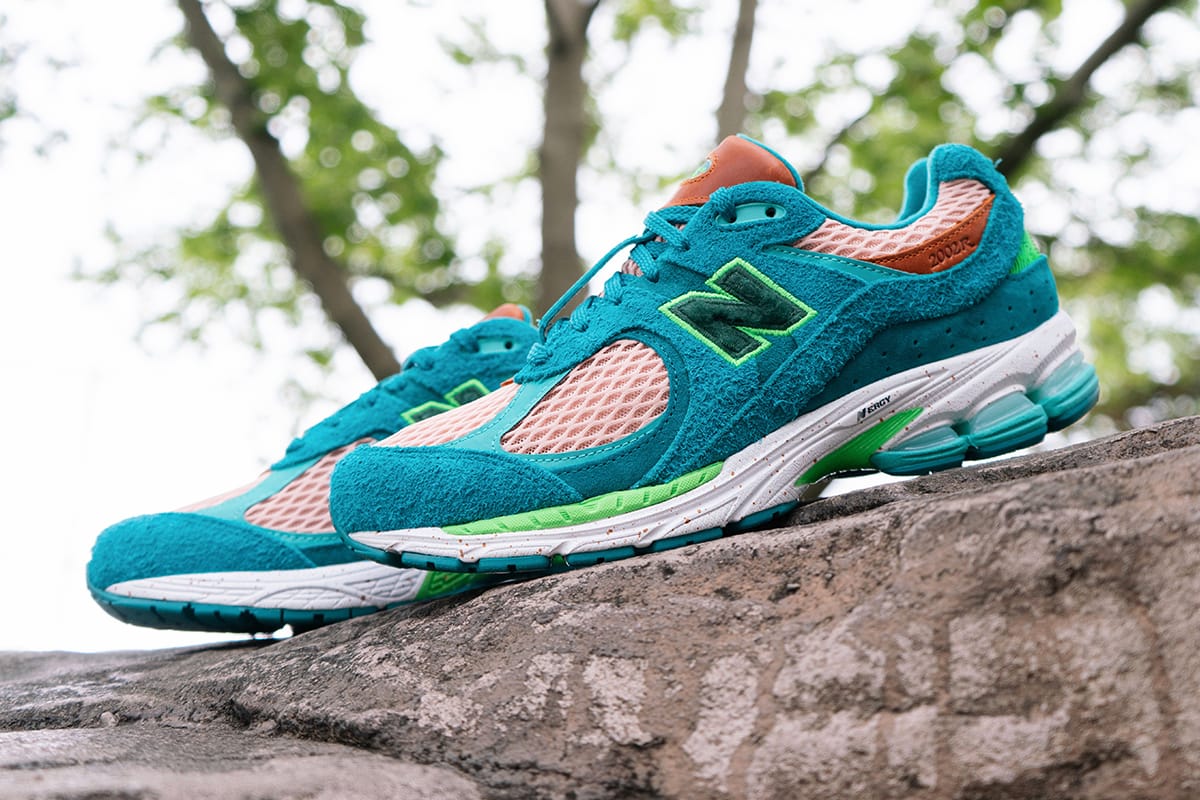 It’s got a wilder color scheme, a greater production run and all the cultural cachet that comes with having its predecessor be widely lauded as one of 2020’s best releases. Since it dropped, Bembury was named 2020’s Footwear Designer of the Year, and Donatella Versace even called him the “greatest living footwear designer.” In short, a lot has changed for Bembury since the “Peace Be the Journey” hit retailers eight months ago.

Put simply, Bembury has an innate talent for making cool sh*t. His collaborators agree: “he’s a true creative, rather than just a shoe designer,” says Joe Grondin, Senior Manager of Global Collaborations and Energy at New Balance. Grondin has had a hand in all of the brand’s biggest partnerships of late, and is effusive in his praise for Bembury.“Once we saw the reaction to Salehe’s first 2002R collaboration, I asked him if he wanted to run it back — and here we are,” he says.

“The ‘Water Be the Guide’ collaboration exists during a time where I’m handling the most responsibility, momentum and projects of my life,” Bembury tells HYPEBEAST. This isn’t an overstatement: apart from his 2002R, Bembury is working on a yet-to-be-revealed collaboration with Crocs, a fingerprint-coated Vans Authentic and, since leaving Versace in December 2020, has been funneling his energy into his new Spunge initiative — an outlet for personal creative products and e-retail venture that he says enables him to “create whatever I want, with no restrictions.” 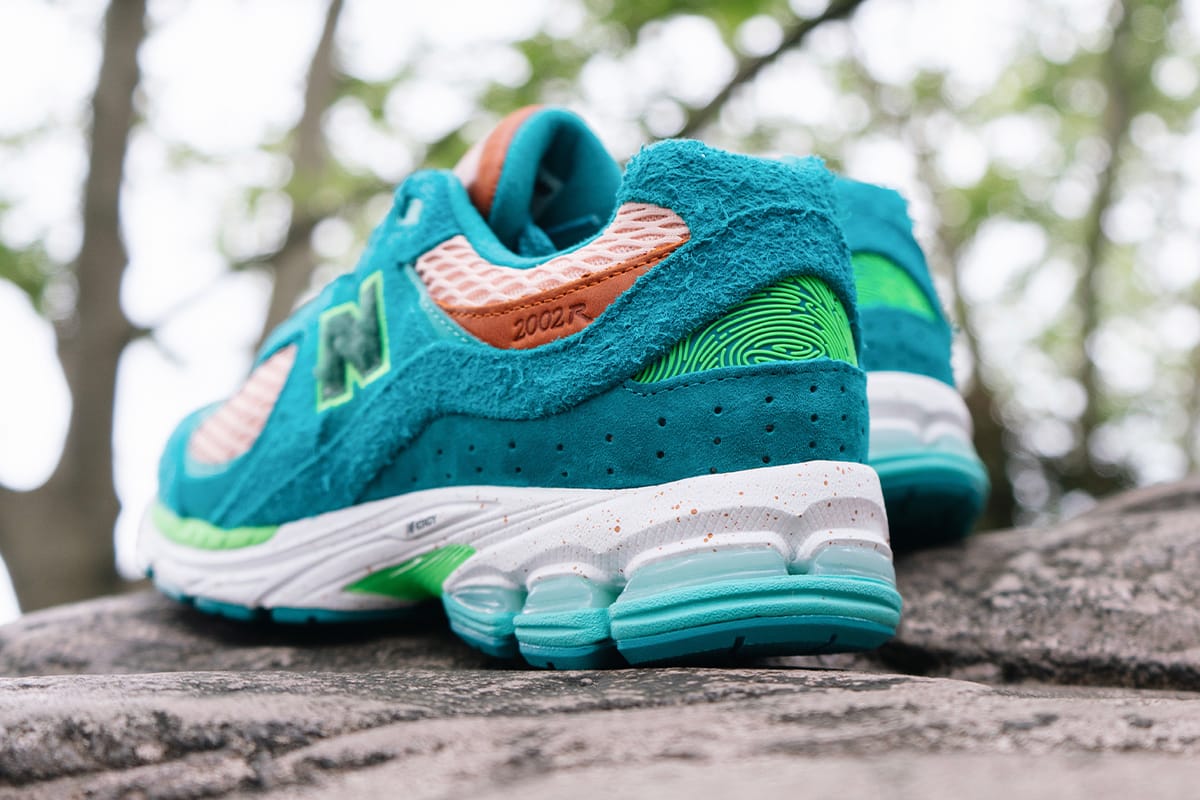 “With my enhanced workload comes an increase in resources and knowledge,” he continues. “The first 2002R was a very D.I.Y. initiative, with plenty of elbow grease, and it was a fantastic learning experience that let me recalibrate for this new chapter.” And with that new chapter kicking off as the Salehe Bembury x New Balance 2002R “Water Be the Guide” releases via Spunge and New Balance, the in-demand designer has a lot on his mind, and plenty to discuss.

Thankfully, due to his years of experience in the footwear industry, Bembury isn’t concerned by his second New Balance retail release’s burden of proof — in fact, he revealed that he was more worried about the introduction than he is the follow-up.

“I feel less pressure now than I did on the first 2002R release. After you ride a bike without training wheels for the first time and don’t fall, you feel a lot more comfortable on the second attempt.”

“I feel less pressure now than I did on the first 2002R release” he says with a smile. “After you ride a bike without training wheels for the first time and don’t fall, you feel a lot more comfortable on the second attempt.” He’s also frank about the stress he felt during the first collaboration, noting “I experienced a lot of personal insecurity and uncertainty with the first [2002R] collaboration, which was my first as an independent designer. Despite the extreme reinforcement of my peers, I had no idea how my audience would respond … or if I even had an audience.”

Of course, that question was answered with a resounding “yes” by the sneaker community: the shoe sold out in seconds, New Balance’s site crashed on release day, and the shoe’s DIY social media campaign netted over a billion impressions. “That enhanced visibility has definitely had a trickle-down effect,” says Grondin. “New Balance’s in-line business is better than it’s ever been, and projects like Salehe’s 2002Rs are putting the brand in front of a newer, younger audience.” 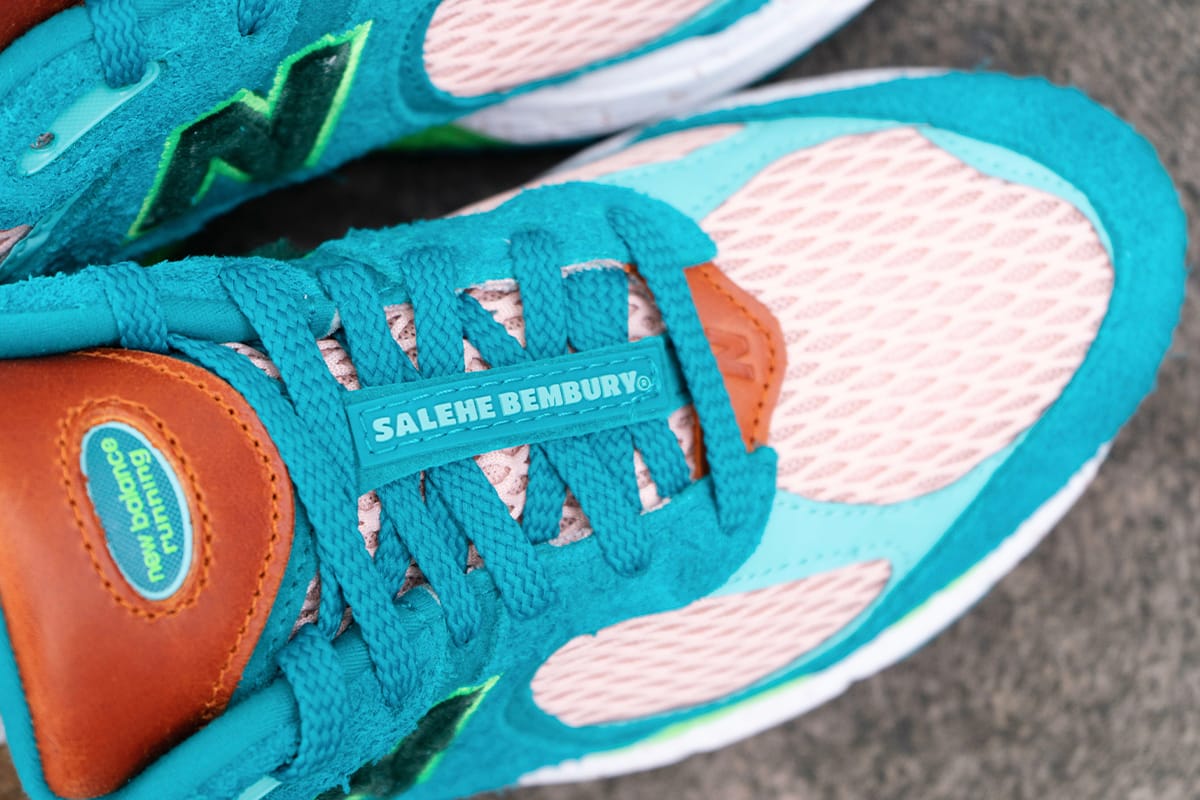 Bembury and New Balance are clearly aware of one another’s impact and strength, but one of the points that they seem to be the most keenly aligned on is the importance of winning through storytelling and clever marketing. The lore around a sneaker is arguably just as important — if not more so — than the sneaker itself, so Bembury made sure that his personal story (and personal style) were front and center on the “Water Be the Guide.”

As anyone who’s followed Bembury’s collaborative journey — or watched his Instagram stories — knows, time in nature is a huge part of his daily life: a way for him to center himself, clear his mind and find inspiration. The “Water Be the Guide” adds further to this ethosby pulling directly from a recent trip he took to Arizona’s Havasu Falls.

“Most of my recent time in nature has been spent in dry weather climates, which spawn a particular color palette that I’m very attracted to,” Bembury says. “However, the moment I witnessed Havasu Falls, there was a shift in the energy and aesthetic I was used to: the color palette immediately shifted, the stillness I was used to in nature became injected with movement and sounds began to present themselves.”

“I wanted to experiment with the drastic juxtaposition of cold and warm colors in the same environment. While some of my previous 2002R was inspired by the stillness of the desert, this second pair draws from movement.”

This joyfully jarring experience can be seen directly on the mix of aquatic and sandy shades that coat the “Water Be the Guide.” “I wanted to experiment with the drastic juxtaposition of cold and warm colors in the same environment,” Bembury notes with excitement. “While some of my previous 2002R was inspired by the stillness of the desert, this second pair draws from movement: the pale mesh is inspired by the sands that meet the saturated waters of Havasu, and the hairy, deep teal suede represents the dramatic energy and movement of the falls.”

Apart from its details, story and personal history, Bembury’s favorite thing about his second 2002R is how different it is from anything on the market. “I believe I’ve successfully executed a new color story,” he says. “Brands usually introduce derivatives of colorways we’ve already seen, and too often things seem a bit ‘safe’. I can confidently say that the “Water Be the Guide” colorway is entirely new, and that’s my favorite part of it. It’s also great to see my brand identity gain more consistency — one of the most significant things a brand can establish is an identity, and it’s been poetic to witness.”1 of 2 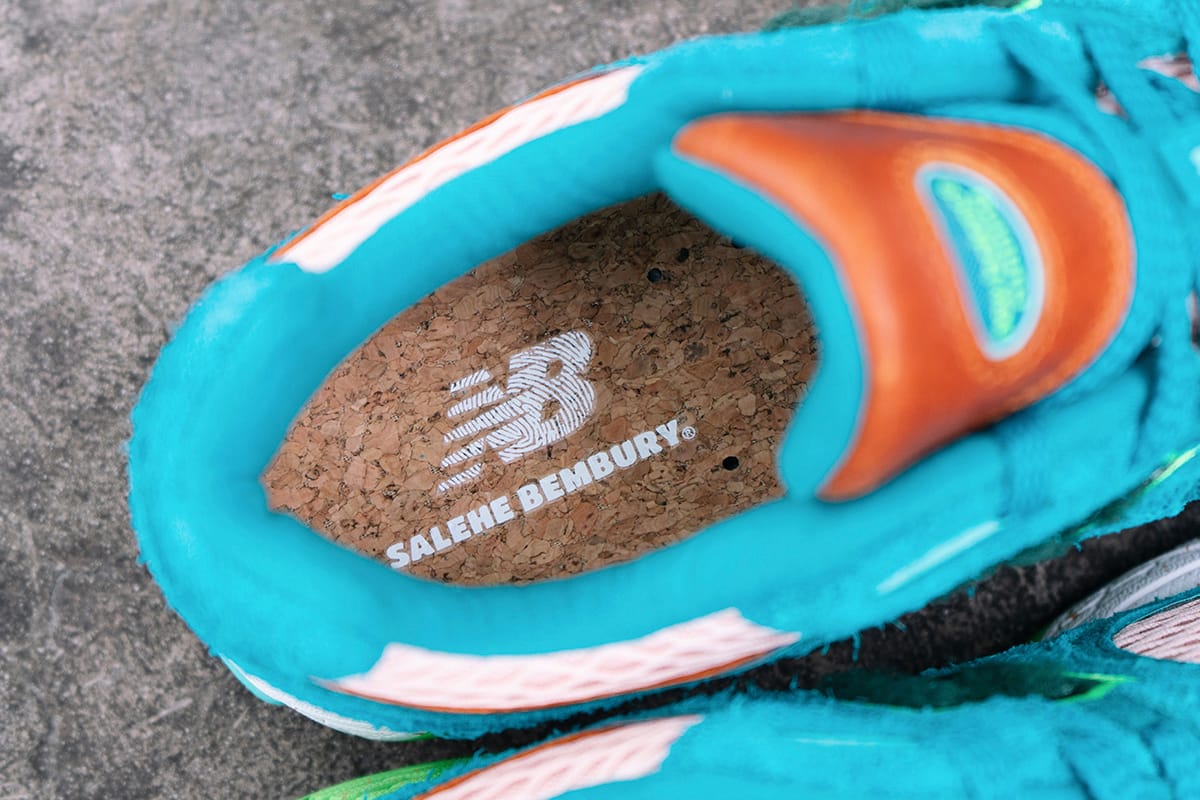 “I’m always fascinated by the perspective of the consumer,” he continues. “If anything, this time around, I have a better idea of what the consumer response will be to my shoes. It’s still rather surreal to see how people react to my designs, and I’m becoming less and less trigger-shy with every successful collaboration I execute.”

Two collaborations in, the partners’ visual identity has been fully solidified — and thanks to Bembury and New Balance alike, the 2002R is widely viewed as the “Salehe shoe.” Yet Grondin stresses his belief inallowing a designer to establish a strong visual identity with a single shoe, instead of ping-ponging them between whatever the “hot” models are.

“Over the past couple of years, [New Balance] has had success building equity by letting specific partners work on the same model — similar to sequels or trilogies within the film industry,” he says. “When the first release is a hit, there’s often more to explore in the same theme.”

“Bodega’s three 997S collaborations [“No Days Off,” “No Bad Days” and “Better Days”] are a good example: all three releases used the same material palette but each built off the previous drop from a story perspective. Aimé Leon Dore’s ‘International Friendship Through Basketball’ story had two parts because we thought it was important to reiterate the aesthetic established for the 550. Salehe’s first execution of the 2002R was so strong and the pairs were so limited that we knew there was more juice we could squeeze out of the concept.”

There was plenty of juice left over for the shoe’s campaign too: a playful video that starred Bembury’s friends Jesse Williams of General Hospital fame and singer/songwriter Austin Mahone. Unlike most modern-day sneaker marketing — which is often inherently serious and demanding, insisting that the viewer respect historical context, design chops or cultural cachet — Bembury’s whimsical mix of percussion, beatboxing and famous friends put fun first and foremost. “Though my primary intent isn’t always to infuse fun, it tends to happen organically given the involved parties,” he mentions. “I aim to make something memorable and humor is a great vehicle to do just that.”

“Water Be the Guide” is the idea that everyone needs inspiration to find their path. I’m trying to give my audience something bigger than sneakers or consumerism that they can hold on to for the foreseeable future.”

While cementing his collaborative ethos through design and marketing, Bembury was keen to impart a message upon his consumers. “Water Be the Guide” is the idea that everyone needs inspiration to find their path,” he says. “I’m trying to give my audience something bigger than sneakers or consumerism that they can hold on to for the foreseeable future. All of the successful sneaker campaigns I remember when I was growing up were ones that I ‘felt’, and the products that simply communicated ‘cool’ or ‘sexy’ didn’t interest me at all. I gravitated towards the ones with a real story”

DMX Reportedly Finished His New Album Before His Death