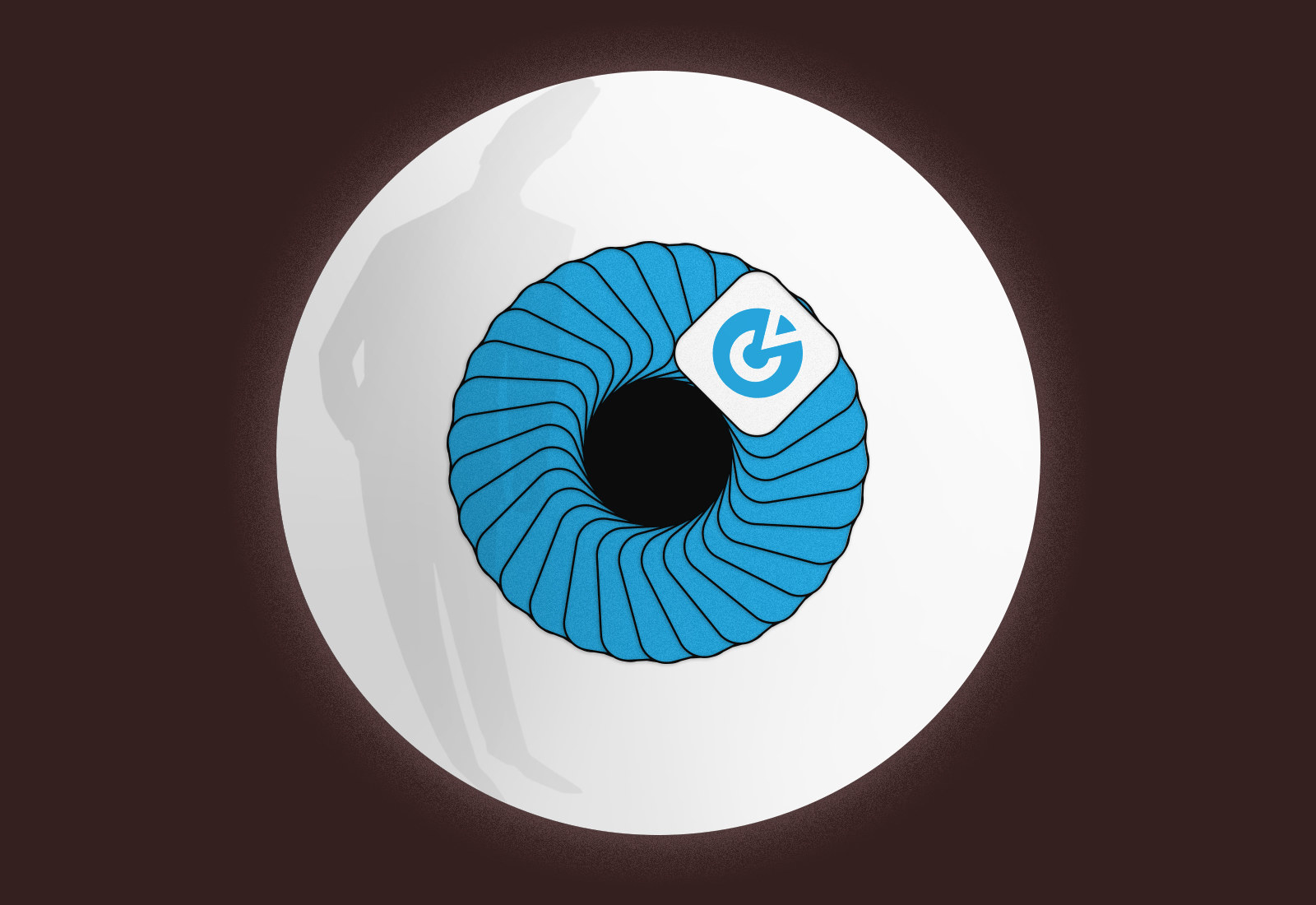 On a flight to Boston in January, James, a young academic, caught the attention of an aisle mate. “Do you go to school in the area?” the red-bearded man asked James, whose name has been changed to shield his identity, amid other small talk about technology and science.

Later, as the plane taxied to its gate at Boston Logan International Airport, the man suggested the two connect on social media. But before James could agree or even give his full name, his fellow passenger pulled out his phone and asked to show him something. He opened an app, snapped a photo of James, and then showed him the phone. The app, which flashed a banner reminding its users not to talk to journalists, populated with a handful of pictures from James’ brother’s Instagram account. And James’ face was in every single one.

James was dumbfounded to see himself in so many photos on a stranger’s phone. Some of his social media accounts had been set to private, and he had been careful not to post too many photos of himself to the web. But the mysterious app had found him on his brother’s Instagram account within seconds.

Later that evening, James received a friend request. It was from the bearded man on the plane — Charles C. Johnson, a controversial right-wing activist and accused Holocaust denier with ties to the Trump administration. Johnson did not respond to multiple requests for comment. 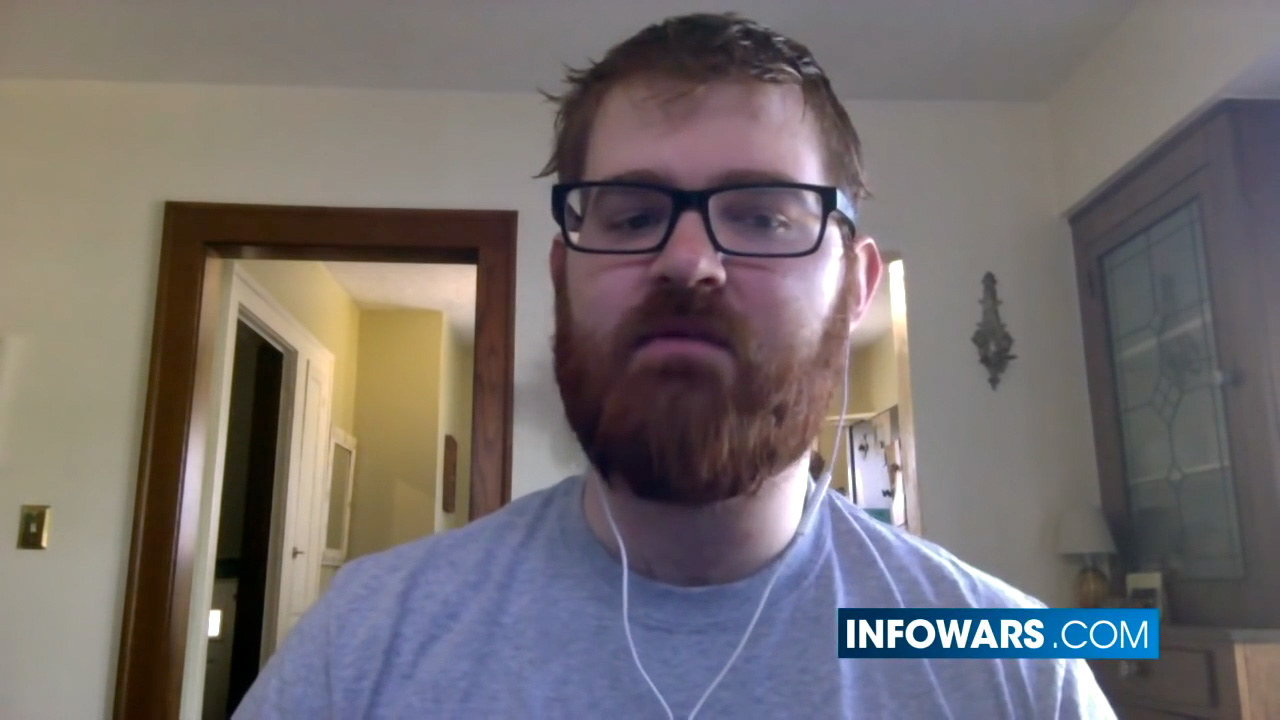 After reading coverage about a new facial recognition tool, James deduced that Johnson had identified him using Clearview AI, a secretive company that’s claimed to have scraped more than 3 billion photos from social media and the web. Last month, a BuzzFeed News investigation found that people at more than 2,200 organizations have tried Clearview’s facial recognition technology, including federal entities such as Immigration and Customs Enforcement, the FBI, and private companies like Macy’s, the NBA, and Bank of America.

Prior to BuzzFeed News’ report, Clearview insisted its tool was strictly for law enforcement. “Clearview AI’s search engine is available only for law enforcement agencies and select security professionals to use as an investigative tool, and its results contain only public information,” the company wrote in a Jan. 27 blog post. “Accordingly, the Clearview app has built-in safeguards to ensure these trained professionals only use it for its intended purpose: to help identify the perpetrators and victims of crimes.”

Clearview, however, has shared its technology with organizations it designated as friends, conservative think tanks, Republican lawmakers, and more than 20 potential investors around the world, according to company documents seen by BuzzFeed News. A handful of those people have connections to the far right and the Trump administration, including CEO Hoan Ton-That, a MAGA-supporting mobile app developer, and cofounder Richard Schwartz, who was once an adviser to former New York City mayor Rudy Giuliani.

Ton-That declined to answer a series of detailed questions, saying: “Once again, BuzzFeed’s information is flawed, some of it provided via illegal means. Therefore, we cannot comment.”

The widespread, unregulated use of Clearview’s technology has concerned both Democratic and Republican lawmakers. Last week, the House Committee on Science, Space, and Technology sent a letter signed by each party’s ranking members to Ton-That asking how his company determined who gets access to its products. That was followed by a separate note to Clearview from Sen. Ed Markey of Massachusetts, who sought to understand why the startup had provided its software to organizations outside of law enforcement and entities in countries with histories of human rights violations, including Saudi Arabia and the United Arab Emirates.

Clearview — which is facing multiple lawsuits from concerned citizens and potential legal action from tech giants including Facebook and Google for scraping their images — has maintained in media interviews that “it’s strictly for law enforcement.” But company data viewed by BuzzFeed News appeared to contradict that statement.

A BuzzFeed News review of the publicly available code for Clearview’s web app found that the company had created a list of “company type” designations — including “Government,” “Bank,” and “Investor” — for entities that had access to its tool. Among those 12 labels was one for “Friend.” A security researcher on Twitter also discovered the same label in an independent review of the code.

On a list of more than 2,200 entities seen by BuzzFeed News, Clearview apparently designated the “company type” of a handful of organizations as “Friend.” Among them was SHW Partners LLC, a company founded by Jason Miller, a former Trump campaign senior communications official and one-time nominee for White House communications director. 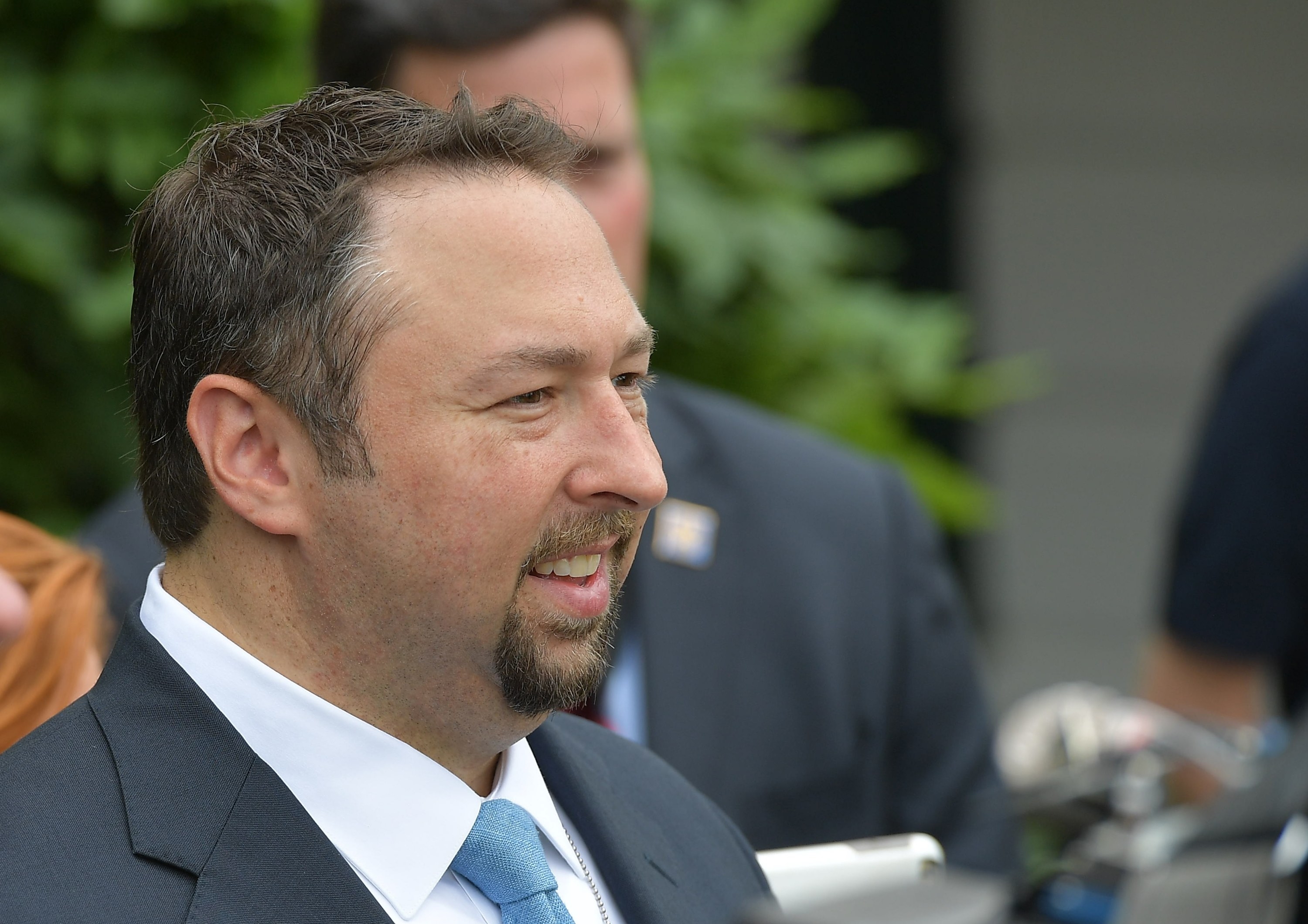 Miller, who cohosts a podcast with Trump’s former chief strategist Steve Bannon, declined to comment on Clearview or why his firm was listed as having access to the company’s facial recognition software. Clearview’s records show that an account tied to SHW had run nearly 20 searches, some as recently as October.

BuzzFeed News previously revealed that Clearview’s data listed the offices of four Republican members of Congress — including Rep. John Ratcliffe, a current nominee for the director of national intelligence — as having been given accounts, along with someone associated with the “White House Tech Office.” That White House–affiliated account was credentialed in September 2019 and performed six searches.

“If a current or former staff member attempted to access more information about this product, it was not an official inquiry and was not sanctioned by the White House,” a senior White House official told BuzzFeed News last month.

Beyond SHW, other entities on Clearview’s list with the “Friend” designation included the Samarian Group, a New York–based private equity firm; Droese Raney, a Dallas commercial architecture company; and Tor Ekeland, Clearview’s external law firm, whose name was misspelled “Tor Ecklund” on the list. All three organizations did not respond to requests for comment.

The Manhattan Institute, where cofounders Ton-That and Schwartz reportedly first met, received an account in the fall. A spokesperson for the think tank said Schwartz is a “longtime friend of the Institute” and noted that a former fellow at the organization had served as one of three judges for a supposedly independent report in which Clearview claimed its technology was “100% accurate.”

Although the spokesperson denied that the Manhattan Institute used Clearview, a document reviewed by BuzzFeed News shows that one person associated with the organization ran more than a dozen searches. 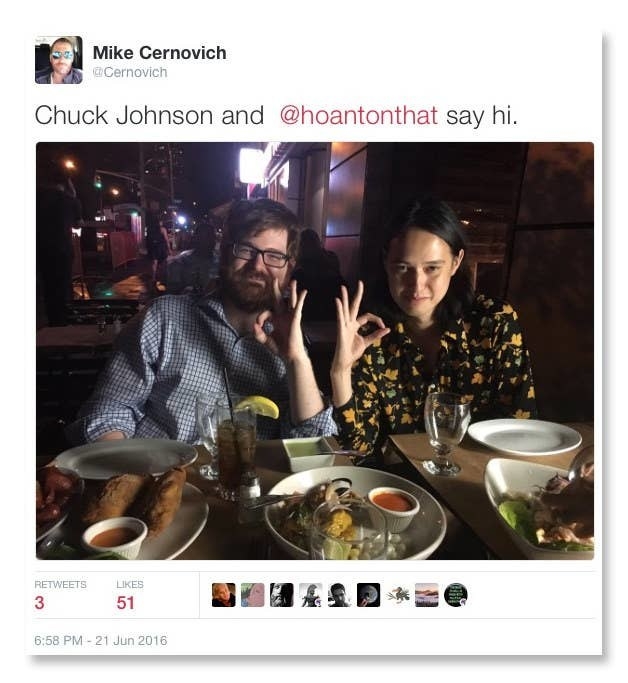 An individual associated with the American Enterprise Institute is also listed with an account, which, according to Clearview documents seen by BuzzFeed News, was designed to display a banner reading “Richard Says Hi” — an apparent reference to Schwartz. AEI did not return multiple requests for comment.

While the data seen by BuzzFeed News listed thousands of organizations with accounts, there were other unknown individual users who ran searches with Clearview’s app. On its list, the startup maintained an entry for “Clearview Test Users,” which included more than 220 accounts that had run more than 30,000 searches over a 19-month period.

When asked if Johnson was one of its test users, Clearview, whose founders have a history of connections to individuals on the far right, declined to answer. Johnson has known Ton-That since at least 2016, when the two were photographed at a dinner together.

Johnson did not respond to multiple requests for comment via email and phone.

Based on a list of credentialed users reviewed by BuzzFeed News, Clearview met with individuals from many of Silicon Valley’s most notable firms, among them Kleiner Perkins and Greylock Partners. A Greylock Partners spokesperson said a firm staffer met Ton-That at “a defense industry dinner” in late 2018 and was given a demo account that was sparsely used. Greylock is not an investor in the company, they said. A Kleiner Perkins spokesperson did not respond to an email request for comment.

Other firms did not invest but are listed in Clearview documents as having run hundreds of searches. Among them was venture capital firm Data Collective Venture Capital, which ran more than 270 scans, some as recently as last month. A spokesperson for the firm confirmed it had used Clearview, but noted that “the product never made it past our preliminary due diligence phase.”

“DCVC invests in Deep Tech companies including those in the AI privacy and security space,” they said. “Through preliminary market due diligence, we evaluated the application with test searches of friends and family, conducted with their full consent.”

Passport Capital, a San Francisco–based firm which did not respond to a request for comment, ran more than 350 searches, according to documents seen by BuzzFeed News. Another account linked to Sequoia Capital was listed as having run more than 210 scans over a 10-month period. The New York Times previously reported that Sequoia managing partner Doug Leone had used Clearview.

“We don’t comment on companies we pass on,” a Sequoia spokesperson told BuzzFeed News. “We regularly test apps while we are evaluating an investment, and we no longer have access to this app.” 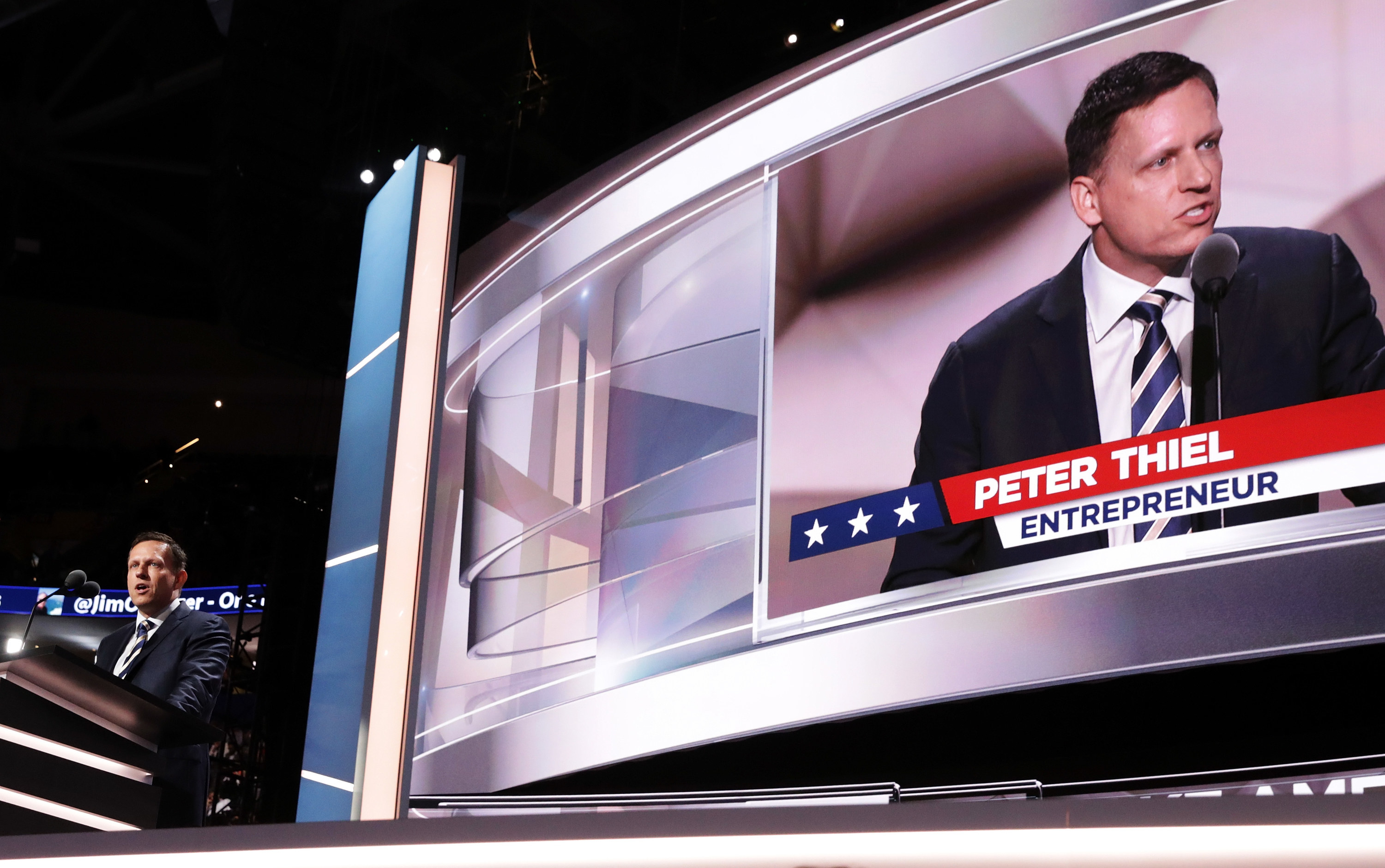 Peter Thiel, cofounder of PayPal, delivers a speech during the evening session on the fourth day of the Republican National Convention in July 2016.

Founders Fund, the venture firm founded by Peter Thiel, a billionaire and Facebook board member, also appears on Clearview’s list. There were two accounts associated with the San Francisco–based venture firm that have run about 70 searches, some as recently as October, according to Clearview’s records. A company spokesperson did not reply to requests for comment.

A spokesperson for Thiel, who personally invested $200,000 in Smartcheckr, Ton-That’s predecessor company — an investment that was later converted into a stake in Clearview — did not provide comment. Thiel’s personal investment firm, Thiel Capital, had a Clearview login, though it appears it was never used, based on documents seen by BuzzFeed News.

Clearview didn’t just stick to traditional venture firms. According to documents seen by BuzzFeed News, it provided two accounts to individuals with ties to Iconiq Capital, an investment firm that manages the money of Facebook CEO Mark Zuckerberg and other tech billionaires. Those accounts ran more than 70 searches, some as recently as February. Iconiq did not respond to requests for comment.

Oculus Rift cofounder Palmer Luckey, who now leads defense contractor Anduril Industries, is also listed in Clearview’s data as having an account. A spokesperson told BuzzFeed News that Anduril “has never had any relationship of any kind” with the company. Clearview data shows that account as having run more than 20 searches.

“Clearview AI, as part of its fundraising efforts, contacted Palmer Luckey in his individual capacity via his personal email to ask him if he would consider investing in their company,” the spokesperson said. “He was sent a test account without requesting one.”

Beyond Silicon Valley, Clearview also credentialed people associated with Japanese conglomerate SoftBank, and RIT Capital Partners, a the UK-based investor in the startup. Mubadala Investment Company, a sovereign wealth fund owned by the government of Abu Dhabi in the United Arab Emirates, is listed in the data as having six accounts that ran more than 100 searches, some as recently as January. An RIT spokesperson confirmed it had made “a very small minority investment” in Clearview. SoftBank declined to answer questions, and Mubadala did not respond to multiple requests for comment.

Clearview data reviewed by BuzzFeed News listed more than 20 venture and private equity firms the company had credentialed, but there were others as well. An entry titled “Clearview Investors” showed five associated accounts, though it’s unclear whom those accounts belonged to.

Among the known investors who did not appear in that data was Kirenaga Partners, an investment firm based in Bronxville, New York, led by David Scalzo. A vocal proponent of Clearview, Scalzo has appeared on CNBC and various podcasts to defend the company and its technology.

One of those appearances was in a January interview with Dilbert creator Scott Adams, who asked the investor if he thought “it’s inevitable the public will have [Clearview AI].”

“It is inevitable that this digital information will be out there,” Scalzo replied. ●

teamLab Dives Into the Metaverse With New “Matter Is Void” Project