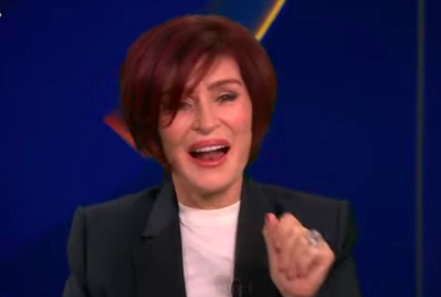 Sharon Osbourne has opened up about her hospitalisation after falling ill on the set of her new TV show.

The former X Factor judge, 70, was taken to hospital last month while filming the programme in California.

Her son Jack, 37, later confirmed she had been released from hospital and a rep has since revealed Sharon had fainted.

The reality TV icon made her first appearance on her TalkTV show since the incident on Tuesday after telling fans earlier this week she would be returning.

Sharon opened the show by saying it was ‘great to be back in the UK especially with all my special darlings’, referring to the panel which included journalist JJ Anisiobi and columnist Nicola Thorp.

After asking how Sharon had been, to which she responded ‘very good thank you’ and revealed she’d had a ‘quiet’ Christmas, JJ said he had been inundated with messages from friends asking how she was.

JJ then inquired about what had ‘happened’, with the presenter responding she ‘wish’ she had answer but didn’t know.

She continued: ‘It was a weird thing. I was doing some filming and suddenly [passed] out for 20 minutes and I was in hospital. I went to one and thenwent to another.

‘I did every test over 2 days and nobody knows why [I fell ill].’

However, after JJ joked if it was ‘do with the vodka’, Sharon laughed and reassured fans she was now ‘doing well.’

Sharon first publicly addressed her accident earlier in December, after it was revealed that she had fainted and needed medical attention.

Sharing a snap of one of her beloved pooches sitting in front of her family’s enormous Christmas tree, Sharon wrote on social media: ‘Back home and doing great! Thank you for all the [love].’

Following her stay at Santa Paula Hospital, Sharon’s son Jack, 37, took to Instagram to let fans know she was home again after being given the green light by her medical team.

He wrote in his statement: ‘Ok here is what I’ll say. First things first MY MOTHER WASN’T A EPISODE OF @ghostadventures. She was filming a new episode Night of Terror with me.

‘Now that we have made that clear… She has been given the all clear from her medical team and is now home.

‘As to what happened to my mum – I’m gonna leave it to [Sharon] to share about when she is ready.’

News of her hospitalisation came after TMZ reported Sharon, wife of Black Sabbath rocker Ozzy Osbourne, had suddenly fallen unwell on the set of a production shooting at the Glen Tavern Inn in Santa Paula.

The Talk airs on TalkTV weekdays at 9pm.

The Day a Sniper Shattered My Marine Unit’s Innocence

4 Life Lessons I've Taken Away From The Bold Type